Vo Trong Nghia is an architect mainly active in Vietnam. Even among contemporary Asian architects making their name on the world stage, Vo has been gaining particular attention for his work. His lecture, titled after the theme of his activities "ARCHITECTURE should connect HUMAN and NATURE", introduced some of his completed works in Vietnam.
Southeast Asia is experiencing explosive growth, and the resulting development and urbanization has resulted in a wave of problems endemic to cities, such as worsening living environments and irregular climate and weather. Vo has brought a breath of fresh air to these struggling environments by tackling their attendant issues head-on using traditional Asian building materials and methods. In his efforts to reestablish a sense of harmony between the people of a community and its surrounding natural environment, he has given us a valuable hint at how to approach issues currently being faced by cities around the world. 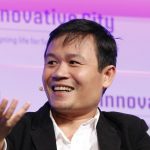 Vo Trong Nghia was born in Vietnam in 1976. He is an architect certified by the government of Vietnam. In 1996, he came to study in Japan with a scholarship from the Japanese government, continuing his studies from technical school through to graduate school, under the guidance of architect Naito Hiroshi. Vo then returned to Vietnam in 2006 to open his own studio, Vo Trong Nghia Architects in Ho Chi Minh City. Now, he has over sixty employees under his supervision. Since opening his own studio, Vo has researched building methods that employ bamboo structures. His approach, which covers all aspects from materials processing to construction methods, has been highly praised both locally and internationally. He has since promoted a series of projects of his design, such as usage of natural materials and green architecture under the theme of "architecture that connect people with nature." In recent years, Vo has gone beyond green projects, making efforts to improve the capacity of urban environments to respond to natural disasters and heat dispersion. Major awards Vo has received include the Prince Claus Award, The ARCASIA Awards Gold Medal, the Architectural Review House Award, and the Green Good Design Award.

Hello, my name is Vo Trong Nghia. I am currently working in Vietnam as an architect, but until about ten years ago I was studying architecture in Japan. First, I studied at the Ishikawa Institute of Technology, proceeding to further study at Nagoya Institute of Technology. Then I continued my graduate studies at Tokyo University, and partially completed a doctoral program there. In 2006, I returned to Vietnam, and now it has been ten years since I opened my own architectural studio. Today I would like to share with you the issues Vietnam's cities are facing, and, alongside examples of my design work, how we can address these issues through architecture and urban planning.

Vietnam's population is very close to Japan's, at 92.7 million people in 2016, according to the General Statistics Office of Vietnam. Aside from the population, both countries share very similar terrain. Here is a picture of a typical city in Vietnam. There is almost no greenery, and it is what you could call a "concrete jungle." Moreover, increasing numbers of motorbikes and cars on the road is leading to ever-worsening living environments.

Ho Chi Minh City is home to about 8 million people (8,146,000 in 2015 according to the General Statistics Office of Vietnam), and almost every day you will find terrible traffic jams that rival those in Bangkok or Jakarta.

This problem of lack of greenery has recently amplified frequently-occurring issues such as pollution and flooding. Even a brief cloudburst results in flooded roads, and year over year, sea and river levels are rising, leading to flooding of surrounding areas on an almost weekly basis.

On top of all this, the heat is unbearable. It seems to me that residents have resigned themselves because of these problems, and no discernible response has been taken at any level.

At one time, most people walked or used bicycles, but nowadays, motorbikes and automobiles that ever-increase in size are the norm. In other words, in the face of the ever-growing desires of its people, the city as a living space suffers more and more.

We believe that architecture should connect humans and nature.
With this in mind, we want to transform our current cityscapes by architecture and urban planning that creates greener spaces.

HOUSE FOR TREES (2014): Realizing greener cities one house at a time

I would like to show and explain to you some specific examples of our work.
This is a project titled HOUSE FOR TREES from 2014.

A friend of mine was facing some mental difficulties and became unable to leave his home. His wife asked us to design a new home for him, and this is the house we made. I wanted to create a living space he could feel free to step out of, out into nature. While there are some drawbacks to this design, such as having to step outside to move between the bedroom and bathroom and perhaps get rained on, this also creates opportunities to get some sun and encounter nature throughout your day. My friend says his condition, which had weighed on him, has improved since moving in.

The figures of the home have been designed to resemble tree planting pots. While made of concrete, we used a bamboo frame (set into the fresh concrete before it set, in place of veneer). This gave the concrete surfaces a textured, horizontal striped pattern made of bamboo.

When seen from the outside, it seems like a very confining home, but once inside it is quite open, with rooms facing an inner garden, giving the space an airy feeling.

This home is located in the most densely-populated neighborhood of Ho Chi Minh City. It is surrounded on all sides by small tenements with corrugated roofs and is almost devoid of greenery. Since this home is the only green space in the area, it soon became home to many birds. The owner often tells me he can't sleep because the birds are so loud [laughter]. I know for sure, though, that it also stimulates his mind and body, and is helping improve his condition over time.

Here is a cross-section view. The construction is very simple, with the rooms laid out as you see here. The roof features a deep layer of soil where trees are planted. Since it rains often in Vietnam, and there is also plenty of sunlight, hardly any maintenance is necessary. The "pots" also serve to collect rainwater. If more housing in the city were to make use of this idea, we think the risk of flooding damage could be reduced.

Here is what the home looks like at night.

In this photograph, you can see the sky, but since then the trees have grown considerably, and now the sky is almost completely obscured.
In this way, one home at a time, by incorporating as much greenery as possible, we can increase the number of green spaces to gradually change a city that is almost devoid of them.

I would like to introduce one more building we designed, a villa in Ho Chi Minh City. It has several gardens located on the upper floors, which results in a structure of layered living spaces and gardens. It is home to a couple and their two boys. With this in mind, the home was designed to have distinct spaces which are at the same time connected in many ways. In this way, the spaces occupied by the father, mother, and children are all linked together.

The design creates many connections among people, and between people and nature. The numerous gardens provide ample views of greenery from the different levels of the home.

It is designed with a central garden which you can look over from a bedroom and see the dining room beyond.

From the master bedroom, different levels of gardens as well as other bedrooms can be seen.

Here is another home we designed. Since local zoning regulations required a sloped roof, we planted a garden on top of it.
For the interior, we used brickwork to enhance the design.

The sloped roof was designed as a park. Its relative spaciousness, when seen from above, sets it apart from the surrounding neighborhood and serves as an accent to the environment. It is designed to be a small garden that everyone in the community can enjoy.

Next Page
FARMING KINDERGARTEN (2013): A kindergarten that connects its grounds and rooftop with food