Tri Rismaharini was elected as the first female mayor in the history of Surabaya in 2010 and has served in Surabaya's municipal government for more than twenty years. She is also known for her success in transforming Surabaya from a dirty and dry city to a "green & clean" one. Her hard work began in 2005 when she converted empty lots and deserted gas stations into beautiful city parks during her tenure as the head of Surabaya's Public Cleanliness and Parks department. In her presentation, she talked about some of her completed projects and successive challenges in Surabaya. 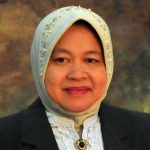 Born in 1961, Tri Rismaharini is the mayor of Surabaya, Indonesia. She completed both a bachelor's degree in architecture and a master's degree in Urban Development Management in 1987 and 2002 respectively at the Sepuluh Nopember Institute of Technology in Surabaya. She also completed a course on Urban Development Management at the Institute for Housing and Urban Development Studies in Rotterdam in 1996.
Since Tri Rismaharini's appointment as the first female mayor of Surabaya in 2010, Surabaya has won a number of awards including the 2012 ASEAN Environmentally Sustainable City Award and the Adipura Kencana, the highest environmental award in Indonesia. She was named as one of the ten most inspiring women of 2013 by Forbes Indonesia.

Improving the Quality of Everyday Life

Hello. Today, I would like to share with you our initiatives on the development of Surabaya and what we do to materialize happiness for our residents.

I would like to start by introducing Surabaya a little. Surabaya is the second largest city in Indonesia, after the capital city of Jakarta. Of the total area of Surabaya, around 60 percent is kampong *1 or urban villages. Previously kampong was known as a slum where people with insufficient education and criminals resided.

*1 Traditional villages or communities of houses in Malay-speaking areas. The term kampong has also been used to refer to urban slum areas and enclosed developments within towns and cities.

The first initiative I took as mayor was to improve the condition of these kampong by teaching and empowering the residents to participate in the base management of the environment. Improving the sanitation system and infrastructure of the area, we thought, would lead to the betterment of the environment as a whole.

In cooperation with city of Kitakyushu in Japan, we started educating residents to manage solid and liquid waste in kampong. Organic waste is turned into compost which they can then use to fertilize their own plants and produce, and, in the long-run, will reduce the amount of garbage in landfills. Now, kampong can contribute to Surabaya's urban development and can also promote the many programs carried out.

Learning of the limited number of policemen compared to the large population, we also encouraged people to take part in public security beginning with their own residential areas. We also have kampong that are non-smoking with specific and limited areas just for the smokers and working on anti-drug campaigns to prevent drug use. We also provide them with sporting facilities to help improve their health.

In order to increase the average household income, we have been implementing family planning programs and supporting business growth, some of which include the preservation of heritage sites and traditional kampong games.

Since Surabaya consists of a long coast line, it's also important to serve the needs of fishermen. One of our projects involved cleaning the coastlines so that kampong with fishermen can enjoy an increase in their income, a fact which is reflected in the growth of the fishing business. We've also built a new bridge to preserve this area, which has now become a new tourist destination for our visitors.

Through the environment program and implementation of the three Rs―reduce, reuse, and recycle― in not only the kampong but also schools and government offices, I think we've succeeded in raising the awareness of the residents of Surabaya regarding the management of waste products. I think they now see garbage and waste as a valuable component of their earnings and lifestyle.

Every year, we organize "Trashion", a fashion show where the clothing are made from recycled materials. "Trashion" is a portmanteau of "trash" and "fashion."

Through independent, community-based management, residents sort waste from its source: they can sell inorganic waste taken from the many waste bins located throughout the city, including kampong and schools. There are now 260 waste bins and a total of more than 16,000 customers; this amounts to a profit of 11,000 US dollars per month. Residents can now generate additional income from recycling and selling products made from inorganic waste. At the same time, we also have compost units to deal with organic waste. We have 26 compost units and a Super Depo which was built in cooperation with Kitakyushu. This composting method helps reduce the volume of waste in the city by an incredible 70 percent.

On top of these initiatives, we have also built a beautiful sidewalk with a water-cooling system underneath because Surabaya is relatively hot at night. People can go outside and walk along the sidewalk to get some fresh air and socialize.

In addition to the sidewalks, the Surabaya municipal government also built 372 public parks that cover 94 hectares of the city to be used as public spaces for people to destress and, again, socialize. They are each designed for specific purposes, making each of them different and unique. For example, we have a "talking park" where we installed sensors to enable those who are visually impaired to enjoy the park. We also have parks that were previously used as disposal sites and also others for senior citizens and palliative parks for cancer patients so users and visitors can get together and share their stories. Jogging tracks, playgrounds, and free Wi-Fi are available in all the parks.

Street vendors are also added to contribute to the local economy but also to control food hygiene, and we also planted as much as 35 hectares of flowers to add flavor to the landscape and to beautify the city. To go back a little, the fertilizers we use for these flowers are from the compost units I mentioned.

Now to introduce some of the results from these environmental initiatives: One, we've seen a decrease in the amount of waste disposed to landfills despite the increase in the population. And two, the air quality is increasing and the number of diseases caused by bad environmental air is decreasing.

Previously, our teenagers loved to do graffiti; they were everywhere, on vans and so on. So we built special spaces for them to experiment with and draw their "murals" to their hearts content. These murals now make Surabaya beautiful and colorful.

During my first year as mayor, in 2010, 50 percent of the city was prone to flooding. So, we built a larger, better drainage system and now due to regular draining we've succeeded in decreasing that percentage to only 3 percent or 1,228 hectares.

In addition to managing the solid waste, people have also figured out ways to create simple, low-cost equipment for using water more efficiently. These are installed in 60 locations throughout the city, and these save us up 14 to 20 percent of the volume and cost of water-use because the gray water distilled from the water treatment is used to wash their motorcycles and cars, for watering their plants, and so on.

Our future initiative to improve people's economic situations will be a program called Economic Heroes where we invite housewives, especially those from the poorer families, and provide them with the necessary training and means to start their own businesses. We started with only 89 in 2010, and now we have 6,700 groups of women growing in Surabaya.

We also have a program called Young Warriors through which we facilitate young people to also start businesses in the fields of their interest. There are now more than 600 groups of young people joining this program.

As part of these programs we cooperate with creative groups of youth who work on product packaging and branding of the businesses that began in our assemblies. By supporting these talented young people with their businesses, I think we are building relationships and coworking environments which help nurture their start-up businesses as well as further develop industry.

Furthermore, to go back to food vending: the city government built 45 centers for street vendors to accommodate the sales of street food and to provide them with better places to sell their products, and this helps increase their incomes as people feel more comfortable and safer buying food there. We have also developed the Business Kampong program to encourage each kampong to create and develop their unique, local products.

Urban farming is also one of our solutions for the limited arable land available in the city. We have 39 farmer groups and 45 fishermen groups engaging in urban farming. In total, the groups can generate an income of up to 742,000 US dollars per month.

To prepare our residents for the increasingly globalized digital era, we provided a learning center where they can learn about information technology and use the internet free of charge. We also have training programs to teach online marketing to business owners.
A total of 1,900 free Wi-Fi spots are available throughout the city for easy access to the internet and for people to get government services. A foreign language learning center and a mathematics learning center where students can learn for fun are also available free of charge.

Being Responsive is the Key

A large number of our population expects the city government to provide vital, easy, and fast services and that is a big challenge for us. That's why we use an electronic government system for all of our administrative and public service programs. From budgeting, planning, and monitoring to the issuing of certificates for births, deaths, and marriages, these can all be applied for using our online system. They can apply online using their mobile phones and have their documents sent directly to their home address.

We also established a command center with a 112*2 emergency call number that integrates all departments in the city government and works with the police department to help the handling and reporting in an immediate manner. The emergency calls we get are actually very unique though; they're not limited to emergencies. They call the number when the water service is off, when the street lighting is off, the drainage system is closed, and so on. There was even a case where a resident called 112 asking for help to take her children to the hospital to see their father who was hospitalized. There are even people reporting domestic problems in which case we suggest psychologists for them to receive counseling.

*2 The number for an emergency call that can be made from most mobile phones in Indonesia.

I have rushed through quite a bit, but all of these initiatives lead to my dream of making Surabaya a safe home for residents where they can feel comfortable and where everything they need is easily available within their reach.