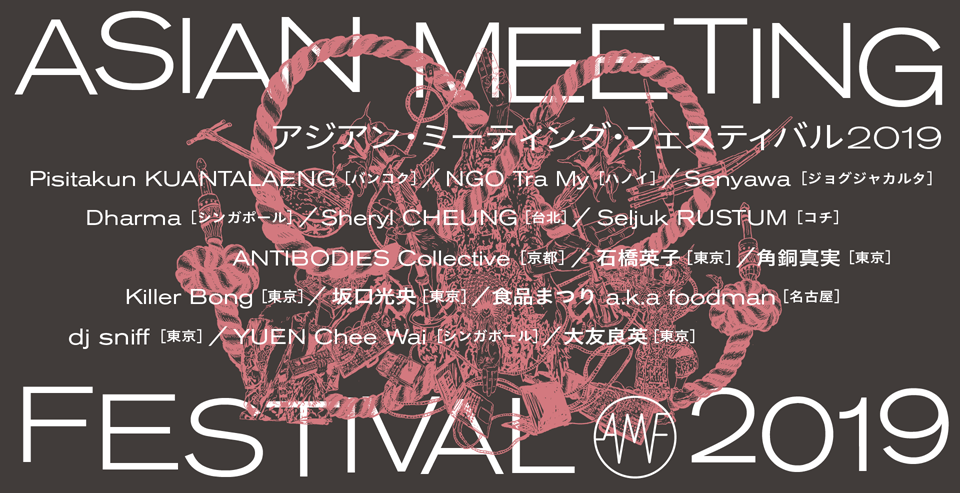 The Japan Foundation Asia Center will hold the Asian Meeting Festival 2019 (AMF 2019) with the aim of creating a model for collaboration in arts and culture as well as the pursuit of new forms of musical expression through improvised performance, with a focus on musicians working independently in Asia.

No voice is better than others. Cari Padu is a performative improvised choir workshop devised by Rully Shabara to create a seamless relation between chaos and harmony. Although not all workshop participants are obliged to, the outcomes of this workshop will be presented in front of live audience at Concert #2 on Friday, July 5.

Sheryl Cheung works between experimental sound compositions, abstract scoring and performances to explore a material concept of life. She experiments with the idea of the body as an instrument that is continually played by affects. Growing up emotionally affiliated with many cultures, locations and communities, active listening became a way to deepen her awareness of the multi-worlds. She is also the co-founder of lololol.net, an art project that is currently exploring Taoist-informed mind and body technologies. Cheung currently lives and works in Taipei, where she is an independent artist and writer.

Dharma is best known in Singapore as guitarist of avant-rock group The Observatory. His initial experimentations with the electric guitar were with effects and later on incorporating objects to bring it to a grittier level, often transcending to a mystical and industrial-esque dimension. Intergranular Space was his debut album as a solo performer and since 2015 he has been pursuing solo performances more actively. In 2018 he appeared at the AngelicA 28 in Bologna, Italy and also toured actively in Europe. His latest album Electric Animism was released in April 2019.

Pisitakun Kuantalaeng started making visual arts in 2009, and started playing music sometime later with an interest in how expressions shape under different media environments. Historical events, synthetic sounds, and musical instruments inspire his songs. Pisitakun's practice represents a decisive break from many of his Thai peers in time when the country's history unfolds under an ongoing martial law since the military coup d'état on 22 May 2014- he questions fundamental and increasingly universal values without merely decrying the fact of corruption or offering neat palliatives. His works are based on political speculation and the external and internal frustrations artists are subject to.

Ngo Tra My is one of Vietnam's leading dan bau soloists. Her field of musical activities range from not only performing traditional, contemporary and experimental music but also in its research and education. She is currently a dan bau lecturer at the Vietnam National Academy of Music and is a member of The Six Tones Experimental Group, The MMTM Contemporary Music Group, The Thang Long Traditional Music Group, and Vietnam Traditional Orchestra. She is a delegate of the Asian Traditional Orchestra and a member of One Asia Joint Concert Project. Since 2015, Tra My has been a music advisor of the C asean Consonant Project.

Seljuk Rustum is a Kochi based arts practitioner originally from Kannur, Kerala. He is a painter, musician, curator, producer, recording engineer and the founder and current Creative Director of performance space Forplay and audio recording studio 3:1 Audiostation. As a musician he plays alto saxophone, guitar, percussion and synthesizer with several bands and an expanding collective of like minded artists. Being a self taught musician, his sound work is an extension of his visual work and his music is a mixture of joyful noise and simple naive melodies. His work has elements of folk, classical Indian, Arab music and free jazz.

dj sniff (Takuro Mizuta Lippit) is a musician and curator in the field of experimental electronic arts and improvised music. His musical work builds upon a distinct practice that combines DJing, instrument design, and free improvisation. His collaborations include Evan Parker, Otomo Yoshihide, Martin Tetreault, Paul Hubweber, and Tarek Atoui. He was Artistic Director of STEIM in Amsterdam between 2007-2012 and Visiting Assistant Professor at the School of Creative Media City University Hong Kong between 2012-2017. He is now based in Tokyo where he acts as Co-Director of the AMF.
Official web http://djsniff.com/

Yuen Chee Wai is a musician, artist, designer based in Singapore. Often inspired by ideas drawn from philosophical and literary texts, and perspectives glimpsed through the filmic eye and photographic lens, Yuen's stylistic oeuvre in music is marked by internalized reflections on memory and loss, invisibility and indeterminacy. He is a member of the improvised music quartet FEN (Far East Network) and co-directs the AMF. He is also a member of the avant-rock band The Observatory. With twelve albums to date, the band has also conceived a vanguard of initiatives such as BlackKaji and the annual festival Playfreely. Official web http://www.theobservatory.com.sg/

Otomo Yoshihide was born in 1959 in Yokohama, and spent his teenage years in Fukushima, Japan. Over the years, he has insisted on being independent, composing a wide range of music from improvisation to noise music and pop, that has been internationally recognized. He has also produced and scored more than 70 movie soundtracks. In recent years, he has initiated a variety of musical collaborations that take place in unconventional settings and groupings of people titled "ensembles." He has awarded by the Ministry of Education for his work "PROJECT FUKUSHIMA!" and won the Japan Record Award for composing the theme music for TV drama Amachan. AMF is his brainchild, first organized in 2005.
Official web http://otomoyoshihide.com/

ANTIBODIES is a collective of specialists with the idea of developing new interdisciplinary models for dynamic collaboration across spectrum of disciplines and boundaries. They examine how varied disciplines might relate, intersect and interact through series of experiments and researches that are designed to culminate into performance events, community workshops and other practices that contributes to larger social and educational structures. ANTIBODIES was established in 2015 by Kyoto-based performance artists Yoko Higashino and Toshio Kajiwara as a reincarnation of Dance Company Baby-Q - a genre-bending dance theatre group established in 2000 that have presented performance events and workshops worldwide.
Official web http://www.antibo.org/

Eiko Ishibashi is a musician and singer songwriter based in Japan. Her works spans across improvisation, dance, theater, film, fashion, and she also produces for other musicians. She has released seven albums till this date with three released from Drag City. She is a multi-instrumentalist that plays the piano, synth, drums, flute, and vibraphone. She performs regularly with Jim O'Rourke and Tatsuhisa Yamamoto as Kafka's Ibiki and has released works with Merzbow and Darin Gray. In 2019, with an invitation by Ina-GRM in Paris, Ishibashi conducted an extensive European tour through Italy, France, Germany, Portugal, Denmark, and Belgium.
Official web http://eikoishibashi.net/

Born in Nagasaki, Japan, Manami Kakudo is a musician and percussionist based in Tokyo. She uses her voice, various percussion instruments including the marimba, and anything around that catches her attention to create music and mischief. In recent years, while releasing two solo albums, her work has expanded to supporting popular bands, songwriting for others, providing music for TV and film, and collaborating on contemporary art projects that were shown at the Krolikarnia National Museum in Warsaw and the Serpentine Gallery in London.
Official web https://manamikakudo.wordpress.com/

The blackest of them all.

Mitsuhisa Sakaguchi is a keyboardist and synth player based in Tokyo since 2008. With his unique style of playing the keyboard through effects while at the same time also operating on multiple synths, a piano, and various oscillators, he actively performs in various settings such as solo improvisations, experimental projects, and supporting hardcore and pop bands. He has released three solo albums and various other projects including Stand Alone-404, Guru Host, Teneleven, and Wormhole.
Official web http://enjyaqu.main.jp/

Takahide Higuchi, better known as Shokuhin Matsuri a.k.a foodman is a DJ, trackmaker and painter originally from Nagoya, Japan. His music defies categorizations with an ever-evolving and mutating musical vocabulary that take inspirations from Chicago footwork to Okinawan folk music, ambient, and even J-pop. These influences are playfully twisting into titillating and enchanted sonic collages. His music has been released from international labels such as Orange Milk and Diplo's Mad Decent, and he has played at renowned events such as Unsound, Boiler Room, Low End Theory. He also hosts a monthly program at NTS Radio, London.
SoundCloud https://soundcloud.com/shokuhin-maturi