While based on the techniques of "Khon," Thai classical mask dance, Pichet Klunchun has developed his own dance method and created new expressions. His thorough research and percipient critique on history have resulted in pieces that have been presented across the world and highly acclaimed. We interviewed him on the methodology and difficulty of exploring novelty while having tradition in the core of creation, the situation of dance in Thailand, and international cooperation. 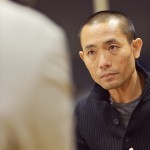 A dancer and choreographer. Trained in Thai classical mask dance (Khon), he has been working across the spirit of traditional dance and contemporary sensitivity. He was the artistic director of the opening and closing ceremonies of the 1998 Asian Games, and his international activities in Europe, and North America include participation in Kunstenfestivaldesarts in Brussels in 2005 and at Lincoln Center Festival 2010. He received Silpathorn Award from the Ministry of Culture of Thailand (2006), Princess Margriet Award for Cultural Diversity from the European Cultural Foundation (2008), Chevalier of the French Arts and Literature Order (2012) and John D. Rockefeller 3rd Award from the Asian Cultural Council (2014).

Classical Dance and the Body

- Your works have been drastically changing: from Nijinsky Siam, via Black & White to Tam Kai. How do you develop a project?

Pichet Klunchun (hereinafter Pichet): In each piece, the techniques evolve continuously: especially the techniques and bodies of the dancers of the company. We work on a piece at least for two or three years. We decide on an idea, i.e., the content and theme first, and then spend the first year for research. We get information from experts, read books and talk with people who have knowledge that we need. While researching, I always talk about what we want to create with the dancers. Since they follow the process together, the dancers themselves look for information too. After the research, we shut ourselves up in the studio at least for six months to consider the dance forms and directions. Then we consider the form of presentation for six months.

- How are the information gathering regarding the piece and the collective work with the dancers linked?

Pichet: Thought, or knowledge, is one of the elements that form a dancer's body. It will be converted into physical language. But the problem that you often find there is that they don't understand what they are doing and they don't know the history. Then you end up with empty forms. What my company does is very new to traditional dancers, and if the dancers cannot liberate themselves from the physical memory that has been accumulated through training, they get stiff. I mean researching and obtaining new information should contribute to the formation of new memory. For instance, Black & White might appear to be a very traditional Thai dance choreography, but it is actually a newly created choreography.

Pichet: That is why the dancers need new memory. For Tam Kai, we rejected all the techniques of the classical dance, so training of the dancers took two years. Everyone was a classical dancer, so we needed time. We thoroughly researched, worked hard in the studio, and then finally the piece was completed.

- In your workshop in "Dance Seminar & Lab" of Kyoto University of Art and Design in 2014, you didn't use the vocabulary of Thai classical dance (Khon) but said that you were more interested in the movements in daily life. I was very surprised, and indeed, you don't use the idioms of Khon in Tam Kai. How have you been shifting from the language of the classical dance to a broader realm of expression?

Pichet: There are various routes. You can immediately move to new physical memory, or you can go there starting from old memory. In my company, a new language emerges suddenly from an old language. Perhaps I'd better say, "develop" We don't create a new physical language but develop an old physical language into a new physical language. Khon dancers usually play certain characters such as Tosakan (ogre) or Hanuman (monkey). They perform the thought and emotion of Tosakan or Hanuman, so their personal thought and emotion are not involved. The meanings of the movements have already been defined in Ramakien*1 However, in Black & White, we didn't work that way and the dancers performed as themselves. This is very problematic for Khon dancers; in short, that is a "wrong" thing to do. We totally altered the original meanings of the physical language. The movements have roughly remained as they originally are, but the meanings and nuances are altered. Officers of the Fine Arts Department of Thailand should get mad if they see that. Liberation of dancers' mind and spirit is forbidden in the framework of the tradition, though I suppose foreign people don't see any difference on the surface...

*1 The Thai version of the Indian classical epic Ramayana. Tosakan and Hanuman are its main characters.

Pichet: Yes, actually everything is based on the classical dance. Let me show you the diagram that I made. (Showing how the computer graphics that visualize the lines drawn by the movements of each part of the body and the flow of energy move) 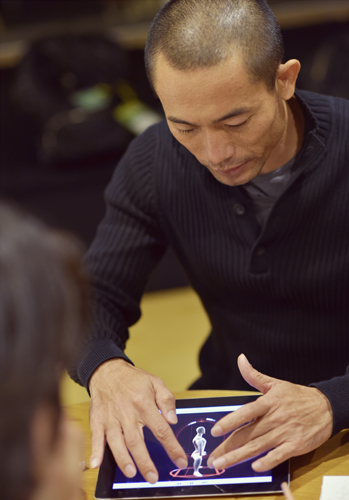 Pichet: These are the forms used in Thai classical dance. These are the lines of the traditional movements. All the gestures are included in them, and if you synthesize them, a circle or a curve emerges. The power is in this curve. Then, if you erase the human shape and extract the curve... You see the direction of a power like this.

- You have shown me the diagram of "thep-pranom*2 " on paper before, but that has evolved into this!

*2 The basic posture in Thai classical dance. Pichet has authored a concise introduction to it in Thai and English.

Pichet: Yes. This is the movement that we made by "developing" the classical dance and used in Tam Kai. You see connections between a movement and another movement. As you dot in a space, move, dot, and move, you put energy in points and create connections between them. You physically use the power of the connections. It is not a traditional movement, but the way you use power is the same.

- That reminds me of Rudolf Laban*3 , who built a system where the range of physical motion is translated into an abstract mechanism from which various movements can be created. But do the movements based on the classical dance connect to daily life gestures?

*3 Choreographer / dance theorist who led German modern dance in the first half of the 20th century.

Next Page
Relationship with Audience