This is the edited version of Dr. Ashir Ahmed' talk at the symposium "Social Innovation in Asia; Building the Future of Civil Society Networks/Asia in Resonance 2019" on 5th July, 2019 at Tokyo Metropolitan Theater. 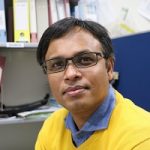 Dr. Ahmed's research aims to produce technologies that achieve social goals. To that end, he established the Global Communication Center (GCC) inside Grameen and developed a research team at Kyushu University. The team has engaged in numerous national and international projects. Examples of these include GramHealth (a 300 dollars portable clinic), GramCar (a ride sharing model for rural communities), GramAgri (iFARM, which is an ICT based farming and marketing platform) and GramClean (KCC: Keep your Community Clean in a Sustainable way). He promotes social businesses to Japanese organizations and assisted in the creation of a number of socially-orientated businesses. He has organized international conferences on healthcare, SDGs, and social business since 2017. After obtaining a Ph.D. from Tohoku University in 1999, he worked with Avaya Labs (formerly Bell Labs) and NTT Communications, Japan.

My name is Ashir Ahmed. I work at Kyushu University on weekdays and work as the director of the Global Communication Center in Grameen Communications on the weekend.

My major at university was computer science and information technology. I previously worked in telecommunications, and, of course, using ICT*1 , many products are being developed and made in that field. I noticed that the things that are developed, the technology or the products, may not reach everybody in society. And, of course, the internet serves as a base for ICT. Only 13.6% of the world's population in 2006 had access to the internet. Therefore, technology or products being developed could be delivered to only a few percent of the world's population.

In 2006, Professor Muhammad Yunus from Bangladesh won the Nobel Peace Prize. In the same year, I had the opportunity to meet him in Tokyo, and on the following day, I quit NTT and decided to go to Bangladesh, because I wanted to ensure that the technologies that we had developed and that we were going to develop could be delivered to people—many people in Bangladesh and in the rest of the world. And all these things led to me being at Kyushu University and also at Grameen Communications right now.

*2 Muhammad Yunus is the founder of Grameen Bank and internationally recognized for his work in poverty alleviation and the empowerment of poor people.

Half of the world’s population are still living in poverty. It’s really shocking, right? Also, 1 billion people cannot read. And it’s said that 1.5 million children die of diarrhea each year. Of course, it has been decades since drugs and medicines for diarrhea were developed, and those drugs are not expensive. They are affordable. But why do 1.5 million children die of diarrhea each year? It means that each day, 4,000 children around the world die due to diarrhea. WHO researched this. India has the biggest number of children dying from diarrhea. Each day, 1,500 kids in India die from diarrhea.

Why is this? Various studies were carried out and the mothers of these children were interviewed. They were asked what would happen if their child was suffering from diarrhea? And they were asked whether they should be given liquid to drink or not? 35% of the mothers interviewed said that they would not give liquid to their kids because they thought that the liquid would cause more diarrhea.

It's not a matter of economics or money. And it is not related to technology. It is due to there being no correct information in appropriate places. That is the biggest cause of these deaths. Those of us who are involved in ICT, I think, have a role to play. And I have my own personal role to play here. So, I went to developing countries to learn lots of things, and that led to my involvement with Grameen.

Right now, the world population is around 7.5 billion. In each household, there is about one mobile phone. And in developing nations, people now have mobile phones. This is a very huge network. With that kind of infrastructure, how can you take the information and how can you communicate the correct information? That will be a challenge to tackle going forward. The number of smartphones is also increasing. 50% of the total number of mobile phones in the world are smartphones.

The world’s population is around 7.5 billion. The world’s population reached one billion in 1800 and it reached 2 billion in 1920, 120 years later. And another 5 billion will be added by 2020. On average, 1 billion people are added every 12 years to the world’s population. So where will the population increase in the future? It won't be in developed nations; it will be in developing nations. These people form the base of the economic pyramid*3 who are living on less than five dollars a day. Those people total 4 billion people, which is 69% of the total population of the world. This is the layer that I mentioned. And this is where lots of our social issues are. If the population increases, these issues and challenges will of course, become bigger.

There's another problem that I would like to point out: wealth concentration. Given that the wealth of the world is 900 billion US dollars right now, only a few people own half of that wealth, and the remaining 50% own the other half. What is alarming is that these few people who own half of that world wealth numbered 388 in 2010 and 62 persons in 2016. In 2017, only 8 people own 50% of world wealth. This flow of money is perhaps difficult to stop, but efforts must be made to slow down the speed of the flow.

The concept of Reverse Innovation

I would like to introduce to you the concept of reverse innovation. As is the case of Grameen Bank, reverse innovation refers to something being developed and certified in developing nations and then going to developed nations.
How does the Grameen Bank work? It’s a structure in which various tools are used in villages, products are made with the tools and sold, and interest is returned to the bank. In this structure, people gradually move out of the poorest segment of the population. This model went to India and then to Africa and then to the U.S. And even in Japan, there is Grameen Nippon*4 . The poor are not really perceived in developed countries, but, looking at the statistics, they do exist in them.

I want to touch upon Kyushu University. I started to do some joint research in 2007. Since then, I have introduced a technical dimension. First, we developed GramCar with Toyota. This is a new kind of car-sharing model. “Gram” means village. We subsequently made GramHealth, which is in the healthcare field, and GramAgri, which is in the agriculture field. We have made various models, such as GramWeb, which is an information platform.

I'd like to talk about GramHealth. This has to do with the telemedicine system for villages with no doctors and no clinics. One box contains a clinic’s functions. With the sensor set, a Grameen healthcare worker carries out a diagnosis, and the information is put on the internet and sent to far away doctors. Those doctors will look at the information and write a prescription. The healthcare workers show the prescriptions to everyone.

Using artificial intelligence, patients are color coded. Patients that are red consult with doctors. Doctors are consulted with, and when a prescription is received, the person prints it out themselves. One box contains a clinic’s functions. Bangladesh, India, Pakistan, Cambodia, and Thailand are using this kind of a system. Looking at the data, 60% of the work can be done by healthcare workers using the software and the system. The doctors are involved at the end of the process.

Using the same system as that of the Grameen Bank, you have this portable health clinic. And social entrepreneurs can be created. This is not just for developing countries.

Actually, the portable health clinic can be used in Japan. We would want to set up the data so that in communities data platforms can be created and various applications can be made a reality. This is what we would like to do through the concept of reverse innovation. Thank you very much.

Dr. Ashir Ahmed will take part in the International Conference on Social Business at Kyusyu University as follows;

Social Innovation Link (SOIL)
Social Innovation Link (SOIL) program by Japan Foundation Asia Center aims to build a network among social sectors such as NPOs and Social Enterprises to exchange specific knowledge and practice which is useful to the projects to tackle social issues commonly shared in Asian countries. To develop a regional eco-system will help to accelerate the social innovation process in Asia.
This symposium was held as a series of Asia in Resonance 2019 in July.