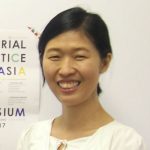 Sutthirat Supaparinya, also known as Som, is a visual artist working in a wide variety of media including installation, sculpture, photography, and video. Her works that document diverse encounters and situations often raise awareness of political structures, shifts in the [socio-political] landscapes, and individual interpretations of mass media. Supaparinya was a 2010 Asian Cultural Council grantee for the International Studio & Curatorial Program (ISCP) in New York and an artist--in-residence at Tokyo Wonder Site in 2012 and the Wellington Asia Residency Exchange (WARE) program in 2015. She currently lives and works in Chiang Mai, Thailand.

Asako Fujioka (hereinafter Fujioka): First, I want to thank you for hosting my screening event at the Asian Culture Station in December [2016]. We showed On the Road: A Document, a 1964 Japanese documentary by Noriaki Tsuchimoto, and I was able to meet local artists and many people who came. It was a very cozy space where you can have tea, encounter art, and enjoy interacting with [a variety of] different people. It's a space of social interaction that cultivates culture in the community. Thank you for the opportunity. You work as an organizer, but are first and foremost an artist. Can we start with how you became an artist?

Sutthirat Supaparinya (hereinafter Som): I started to think about art when I was fourteen. Before that, I wanted to be an astrologer; I loved stars. But when I heard other girls in my school say they wanted to be a scientist, I said, "No, I won't be the same."

Fujioka: You wanted to be different from the others.

Som: But I had no idea how to start. I heard about art universities, I watched a television soap opera with a character who was an interior designer, I read magazines, and I asked my teacher how I can start. From there I started to find my direction.

Fujioka: So it was not that you liked to draw or make art, but it was actually the idea of being an artist that interested you?

Som: Compared to other students, I was not good at drawing. But I found that, with art, I have the freedom to play around. I was happy with that, and the skills came later. My parents wanted me to become a teacher—like them—but I clearly told them I wanted to be an artist. I am not sure if they supported my choice, but they could not really stop me.

Fujioka: They couldn't stop you? Wow.

Som: I am from a province next to Chiang Mai, and the school curriculum at my school didn't place much emphasis on art; at least, not enough for me [to have enough background] to apply to art universities. So I visited a professional artist in the area who [I heard] had talked about opening a class for young people. [It turns out] he wasn't serious. But I kept going to his house; I kept knocking on his door, saying, "I want to take your class. Could you open it for me?" Luckily, he was teaching at the Faculty of Fine Arts at Chiang Mai University and he asked another professor to teach me every Sunday. So I was lucky.

Fujioka: And it is your determination, too; to continue to knock on his door! What was Thailand like at the time?

Som: Looking back at that period (the 1990s), it was a peaceful era and democracy was in good shape. When I started university in 1992, the phenomenal international festival called Chiang Mai Social Installation (1992–1996) had just started. They invited a lot of artists to work in the city's public areas across the city.

Som: It was the start of experimentation in Chiang Mai, because in that period, there was no art space at all. The artists who were from Southeast Asia, Europe, and also Japan used public space to express different things and respond to society. Some artists from Southeast Asia started to work on performance art for the first time.

Fujioka: Tell me about your development as an artist.

Som: In Chiang Mai I studied sculpture and painting because that was all there was then, but later I became more interested in mass media like newspaper, radio, or television. And around that time, I bought a small, Hi-8 video camera and I played around with it a lot. I was lucky because the professor was quite open about using such devices; I think I was the first one in the class to start using them. I displayed videos and paintings in the same space like an installation and invited musicians to play music during the installation [of the work] too. It was like a "live installation." From around then, I didn't want to continue studying painting, sculpture, or print-making anymore. I wanted to learn new, different tools of [artistic] expression. I watch movies and also listen to the radio a lot, and I felt that these types of media make a huge impact on us. So I thought, "Why don't we use those tools also for art?"

Som: When I graduated, I had the chance to work with professional Thai artists and that's when I got interested in sound installation. I worked on site-specific works where I used sound and performance in association with the architectural structure of a building. Then, a German professor suggested that I study media art in Germany. When I looked through the information she gave me, I realized that there is an entirely different world out there, and I wanted to go. So the goal became for me to go overseas.
I started to learn German, and I applied to almost every school that had a media art program. Two years later, I went to Leipzig—my first time abroad, plus I went alone. Nevertheless, I ended up staying for a long time.

Going to a Foreign Land

Som: Leipzig was totally different from anything I had experienced in my life, but I didn't feel like going home. I remember some of my friends who were from rich families [already] wanted to go home after two months. I, on the other, had nothing; no scholarship, no funding. I just asked my family to support me for the first six months of my stay and I told them I will manage by myself after that. I was a little too ambitious because life is not as easy like that.

Fujioka: You were very determined.

Som: Plus, I only bought a one way ticket. I pushed myself so much: I told myself that I must stay; I must open myself to whatever [presents itself to me].

Fujioka: What did you discover in Leipzig? How did it change you?

Som: I changed in many ways, I think; everything was so different from what I knew before. For example, when I was walking through the city, I saw the shop doors were closed and assumed that they are closed. But apparently, that was not the case; the shops had their doors closed even when they were open.

The Difference between Germany and Thailand Back in the day

Som: In my country, in Thailand, when shops are open, they also keep their doors open. But in Leipzig, they were closed. Plus you needed to push the door very hard to get in. And this [small difference] changed my perspective: I realized that I cannot expect people, culture(s), or ways of life in different countries to be the same as my own experiences of them. So I started to see that different cultures have different ways of life, and I needed to open [myself] up and understand these differences.
Also in Germany, I started to be curious of my own roots. Before that, I had never travelled around Thailand or neighboring countries. In Germany, I felt very bad because people would ask me many questions that I could not answer about the region.
So when I returned to Thailand in 2002, I felt the need to travel everywhere, especially around Southeast Asia and Thailand, too. I was lucky because there was an art project focusing on the Mekong region—Thailand, Myanmar, Laos, Cambodia, and southern China. Interesting people in the art scene were invited to Chiang Mai to showcase their practices. I explored neighboring countries through these collaborative projects.

Fujioka: I remember my Chinese friends who were studying visual anthropology in Yunnan, China, were travelling a lot to Chiang Mai and Vietnam around that time. And were you creating art [works] then?

Som: At first, I was more of an assistant curator. I met Gridthiya Gaweewong, an independent curator, founder of Project 304, and current Artistic Director of Jim Thompson Art Center in Bangkok, and we started to work together in Chiang Mai. Her projects were so interesting and allowed me to get acquainted with a lot of people in the region. We were housemates, too. I learned a lot from her about curating, managing, and networking, and I started to do lectures, too. I think it was after one or two years that I started to work as a professional artist. Until then I just enjoyed helping people because there was a lot to learn.

Next Page
The SUNSHOWER exhibition and Chiang Mai