May 24, 2017, Taiwan's highest court, the council of grand justices, made a landmark ruling that opened the gate for Taiwan to become the first place in Asia to legalize same-sex marriage. However, speaking openly about one's sexual orientation or about sexual minorities is still considered a taboo and not as encouraged in many other Asian countries. In Malaysia, for example, a former Deputy Prime Minister was arrested on charges of sodomy, and the circumstances for LGBTs are still severe in other parts of Asia. Malaysian activist Pang Khee Teik, whom the Japan Foundation Asia Center invited in TPAM2017 as a professional in contemporary performing arts, has been vocal on this issue. After arming himself with a Master's degree in the UK, how does he see the current Malaysian society and its future?

Pang participated in Performing Arts Meeting in Yokohama (TPAM) 2017 at the invitation of the Japan Foundation Asia Center. 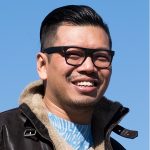 Pang Khee Teik is a Malaysian arts consultant, activist, curator, organizer, photographer, and writer. For the last ten years, Pang has been the director of popular art and activism bazaar Art For Grabs in Malaysia. In 2008, he co-founded sexuality rights festival Seksualiti Merdeka in Kuala Lumpur together with fellow activists and artists. It was banned by police in 2011. He remains active in speaking on LGBT issues as well as mentoring Malaysian LGBTs to organize events to raise the public's awareness. He was formerly the arts programme director of The Annexe Gallery where he curated many exhibitions and festivals. Before that, he was the editor of arts website Kakiseni.com. In 2010, he received the Cross Cultural Champion of the Arts Award at the Boh Cameronian Arts Awards, Kuala Lumpur. Under the Chevening Scholarship, Pang graduated in 2013 with an MA in Gender, Sexuality & Culture from Birkbeck, University of London.

Title at the Current Moment

Seiya Shimada (hereinafter Shimada): It's good to see you again. We hadn't been in touch since I left Malaysia in 2009 but I had been following you on Facebook. To begin, could you tell me your position or title at the current moment?

Pang Khee Teik (hereinafter Pang): I have no title. I mean, sometimes I'm called the founder of Seksualiti Merdeka [Independent Sexuality] or the director of Art For Grabs.

Shimada: One of my colleagues was very impressed with your presentation at the Borak Arts Series in 2014. Could you tell me about it?

Pang: I presented a manifesto I wrote. Let me give you some background. I think it was two years ago that the United States Supreme Court legalized same-sex marriage across the country, and, immediately, Facebook provided its users with the rainbow profile to celebrate the occasion.

Shimada: Like the French national flag just after the terrorist attack in Paris?

Pang: Yes. While I was happy for the LGBT communities in the US, to be honest I was a little bit annoyed at the same time. I feel that the drive for the same-sex marriage legislation in the US is not necessarily the best direction for the LGBT movement because maybe not everybody wants to get married, can get married, or feels the need to be married. Right? And the rainbow as a symbol actually includes a lot more people.

Pang: Yes, it's there. People have been inviting me to read this in public; they like it, I guess. Izan Satrina of the My Performing Arts Agency—they run the Borak Arts Conference in Penang—invited me to perform something at their conference.
So I said, "Ok, I'll do 'We are the rainbow.'" But instead of doing it by myself, I suggested inviting the Rainbow Community of Penang and Kuala Lumpur to perform it with me. So everyone took a paragraph to recite it. Some of my friends, and many different people came together to help me perform this piece. We each wore different colors, so that at the end, when we came together, it became a rainbow. You can see the picture on my Facebook.

Shimada: At the moment, are you spending most of your time on Seksualiti Merdeka*1 and Art For Grabs? Could you explain a little bit about each project?

*1 The word "merdeka" means "independence" in the Malay language.

*2 The Annexe Gallery opened in 2007 as a part of Central Market, a small shopping centre located in the heart of Kuala Lumpur.

Shimada: What kind of activities are under Seksualiti Merdeka?

Pang: We started with one weekend in the first year, and in the second year, it became one week, and in the third year, it became two weeks. We had workshops about how to talk about sex, performances, and a concert called "Rainbow Massacre" where we invited our singer friends to perform songs and queer anthems.

Shimada: What do you mean by "Rainbow Massacre"?

Pang: It's just a title of the concert we had. We "kill" the songs and the audience with the rainbow, basically [smiles]. The idea is to pick a song that you feel represents the "rainbow" anthem, the "queer" anthem—it could be anything from "I Will Survive" by Gloria Gaynor to even U2.
That was my favorite part of the whole program, I think. People really enjoyed the concept, too. We also had performance programs. We actually did a Forum Theatre*3 once. Alfian Sa'at wrote a short script about two boys who were lovers each coming out to their mothers. And we took this performance to universities and colleges, I think, in 2010. We also had lectures and talks. It was a very simple program; it was indoors and small. Not like a parade.

*3 Forum Theatre is a technique used to engage the audience into the action of the play in order to solve issues that actors and audience members face in their daily life. The strategy involves a cycle that is repeated: a stage performance followed by open discussion and re-play of the scene.

Pang: So in 2011, Seksualiti Merdeka was banned by the police because we invited Dato' Ambiga Sreenevasan, the Chairman of Bersih,*4

*4 The Gabungan Pilihanraya Bersih dan Adil [Coalition for Clean and Fair Elections], or Bersih for short, is a coalition of non-governmental organizations that pursue a reformation of the current Malaysian electoral system to guarantee fair elections.

Shimada: So, that was controversial for the police.

Pang: Not just for the police, but also for the government. Ambiga is not popular with the government either, so we think they saw it as an opportunity to discredit Bersih by saying, "See, they are supporting the LGBTs." I think they were also worried that this [the meeting of Bersih and Seksualiti Merdeka] is a legitimization of LGBT; that the leader of a powerful and popular movement is seen to be in support of LGBT. So I think they thought it was the chance to take down both at the same time. I was called in for questioning; bringing someone in for "questioning" basically means to ask for assistance with the investigation. They called in the three of the sponsors, too.

Shimada: Even the sponsors?

Pang: Yes. We had a small number of sponsors: Irene Fernandez from Tenaganita,*5 which is a small NGO; Maria Chin Abdullah from Empower, which is a women's group that functions as the secretariat office for Bersih; and Ambiga from Bersih. They thought that all the three were the organizers. But they didn't press charges.
A day after the ban, I was interviewed by a number of newspapers, and that was how my parents found out that I am an activist. They already knew that I am gay, and it took them a while to be okay with it. I think they were quite proud of themselves for being okay with it, actually.

*5 The Tenaganita is a non-profit organization in Malaysia that support social minorities such as immigrants, refugees, women, and children.

But when they found about my activism—my cousin called my mother and said, "Auntie, your son is wanted by the police"—they were like, "We are okay with you being gay, but why do you have to tell everyone [about being an activist]...?"
I realized that it was, in fact, harder for them to accept my being an activist than being gay; being gay was just something between me, my parents, and my boyfriend. But being an activist is something that other people will come to know and they have to find a way to explain it to their friends.

But an interesting and surprising outcome of this ban was that a lot of people and groups ended up supporting us, and one of them was the Malaysian Consultative Council of Buddhism, Christianity, Hinduism, Sikhism and Taoism (MCCBCHST*6). So a council of all these non-Muslim groups in Malaysia came together and wrote a letter supporting us.

Pang: To be honest, I was quite shocked.

Shimada: In a good way.

Pang: Absolutely. The Sisters in Islam*7 also wrote for us, I think. Even a few progressive Muslim groups defended us.

*7 The Sisters in Islam is a Malaysian non-governmental organization working towards empowering women in Islamic communities.

Pang: And the Assistant Deputy of the police, who banned us at that time, is now the Chief. But, I think, he's now realized that he has to be careful because the whole debate and conversation is about human rights and he even used the phrase "freedom of speech" in one of his arguments. He said something along the lines of being for freedom of speech, but he still maintained that this [LGBT] is immoral, or something like that. When they banned our event, they very cunningly used the Police Act, which has since been repealed.

The Police Act basically stipulates that the police have the right to ban any event that may jeopardize national security—by causing religious or racial tension, for instance—so they used it to justify their ban by saying we are teaching "deviant" lifestyles. And the term "deviant" is commonly used in religious contexts, right?
So because we are promoting the rights of LGBTs, their claim is that we are suggesting that Islam approves of homosexuality. And, by extension, if we are suggesting that Islam and homosexuality are compatible, then our understanding of Islam is a deviant form of Islam, and this will cause religious tension which will then lead to our national security being jeopardized. So it's quite amazing how they arbitrarily but cunningly leap from one logic to another.

Shimada: It seems they're a good storyteller.

Pang: Yes, I was impressed at how they tried hard to come up with their argument.

Next Page
The Position of LGBT in the Society