The talk event "Between language and culture" which exchanges ideas on writing, translation and inspiration between internationally groundbreaking authors Yoko Tawada and Prabda Yoon was held in March, 2019. Yoko Tawada, who is a bilingual writer in German and Japanese, and Prabda Yoon, who has won the Southeast Asian Writers Award in 2002 and is familiar with as a new generation of author and artist, had a talk to introduce diversity to the world through literary as a foreign author who bridges the gap between language and culture. 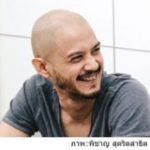 A familiar and one of the most influential name in the Thai literary scene, author Prabda is best known for Kwam Na Ja Pen. Translated under the title The Sad Part Was in 2017, Kwam Na Ja Pen is the first translation of Thai literature into English to be published in the UK. Aside from his role as an author, he is also a filmmaker who challenges and strives to push Thai cinema beyond its boundaries. Many of Prabda's story collections, novels, and films have also been released in Japan. Most recently, one of his collections has been translated and published in Japanese literary review magazine, Genron. 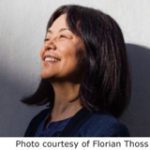 A bilingual writer with works written in both German and Japanese, Yoko Tawada is best-known for winning the prestigious Akutagawa Prize in 1993. In addition to the Goethe-Medaille (Goethe Medal) in 2005 and Kleist Prize in 2016, Tawada has also recently received The Japan Foundation Awards in 2018. Several of her books have been translated into many languages, including Thai and English. The Thai translations of Tawada's works include The Bridegroom Was A Dog and The Emissary, with the latter being awarded The 2018 US National Book Award for Translated Literature. In a discussion with Prabda Yoon, the two writers exchanged ideas on writing, translating, and the relationship between culture and languages at the 47th National Book Fair & Bangkok International Book Fair 2019.

Prabda Yoon (hereinafter Yoon): Perhaps we should start with a little bit of our background. I grew up in Thailand before moving to the United States to study when I was 15 years old. Unlike many, I believe that it is not uncommon for Thai teenagers to study abroad if you come from a certain social background, although back then, I believe that there were many who were reluctant to go. At least that was my impression, although I am not certain whether that is true or not. However, I did want to go because I realized that what I wanted to pursue was deemed unreasonable. You see, I was interested in art, but in Thailand, arts-related subjects were not encouraged in comparison to mathematics or science―many thought that studying art would not amount to much. In your case, however, it was not until after university that you moved to Germany. May I ask why you made that decision?

Yoko Tawada (hereinafter Tawada): For the Japanese, it was not common for one to go abroad, as most people preferred to stay in Japan. However, I was very curious about Europe and the European culture as I had studied many Russian, French, and English literature at university. Back then, Russian literature was my favorite, but due to political reasons it was not a good idea to move there. The reason I moved to Germany was that my father, an academic bookseller, had contacts with a company in Hamburg, and at the time they were looking for a trainee. So I applied and went to work there.

Yoon: Being exposed to a completely different culture, how did you find the experience?

Tawada: Before moving there, I thought, 'two years in Europe sounds great'. When I finally arrived in Germany, however, I felt that two years was too long. I knew much about Europe through my readings, but to be living in the culture itself is something quite different from just knowing about it. Everything was so new to me. There were too many new expressions―I was overwhelmed. I have studied German and Russian in Japan, but it was difficult to understand what people said in real life. That being said, my colleagues were very friendly to me. They would invite me over for dinner and even took me to readings and demonstrations. So in that sense, I was very happy.

Yoon: After two years, you decided to continue your stay, and now you are settled in Berlin?

Tawada: Yes. During my time in Hamburg, I would attend classes and lectures. You could just go in and out of these classes as they were open to anyone. I was fascinated by the students' discussions on literature, so I thought to myself that I would like to continue studying there for a bit longer. After that, I met Claudia Gehrke, a friend of mine and also my publisher. Claudia, after reading the translated version of my poems, told me that she would publish it.*1 And so my first book came out in 1987, five years after I arrived. Thus it was not exactly my decision to stay, per se. Things just happened naturally. It was something like, 'I want to write one more book and do so and so next', so I stayed and it became longer and longer.

*1 A bilingual collection of poems in German and Japanese under the title, Nur Da Wo Du Bist Da Ist Nichts―Anata No Iru Tokoro Dake Nani Mo Nai (Nothing Only Where You Are), 1987

A Freedom To Express―foreign languages as a means of liberation

Yoon: Even though I have lived in the United States for 11 years, I was never really confident enough to write in English. Speaking was not a problem because when you use it every day, you quickly become fluent in the language. Writing, on the other hand, is different. As a writer, I felt that I needed to have a certain confidence in the language―at least enough for me to know if my writing is any good or not. As you were in Germany for only two years before you started to write in German, did you feel confident?

Tawada: It was something quite different from having confidence. I think it was because I really love the German language. When I write German words, they always surprise me―the language itself is like a puzzle. Languages have their own history. When you use it, it is like you are working with it rather than merely using it as a tool to express yourself. Through the language, I could become bigger.

Yoon: So you were interested in the language itself. Did it take long before you feel that you could actually produce a novel?

Tawada: My first prose in German was Where Europe Begins, which is about my travel from Japan to Europe via the Trans-Siberian railway. The book consists of short stories based on real experience mixed with memories from my childhood. Having written the book in German, I discovered that I could freely write about my parents―that was very new to me. You would not want to write about your parents in your mother tongue because they would be able to read it, right? There is this sense of self-censorship when you are writing in your native language. In a foreign language, you can write anything.

Yoon: And in a literary sense, did you feel that you needed help from an editor when writing in German?

Tawada: Not really. I would just write, and then my editor would go over it. Personally, I feel like I did not need them. However, they would help provide suggestions like, 'this is too funny, but you can decide if you still want to put it in', things like that. It was a good experience because then you realize what is deemed normal or abnormal to the native speaker. That was one thing I am always eager to learn, though it does not mean that I want to change what I have written every time.

Next Page
Between Languages and Cultural Identity