We would like to extend the wings of our imagination - how are people from different backgrounds in various parts of India living under the unusual circumstances of the pandemic every day? So, as a small step, we asked five writers to write short stories with the theme "Real Renaissance," and five stories of hope were born, focusing on how humans face a different set of challenges. Further, the experts from various regions introducing these five authors provided reports on each region's sociolinguistic situation and current literary trends. The act of reading stories may feel like an individual activity, but it will actually help you believe that act's power of connecting people with empathy.

This issue features Moss and Dust and the Human Heart, an essay written in English by Sumana Roy. The essay is available in English and Japanese. 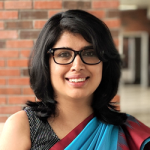 Sumana Roy is the author of How I became a Tree, a work of nonfiction, Missing, a novel, Out of Syllabus, poems, and My Mother's Lover and Other Stories, a collection of short stories. She is Associate Professor of English and Creative Writing at Ashoka University.

Moss and Dust and the Human Heart

Consider this as an optic: a classroom, a blackboard, rows of desks filled with students. Near the blackboard – or whiteboard – stands a tree. It is the teacher in the classroom today.

How would that change the classroom?

It's been more than one-and-a-half years since students have been in classrooms in India and, possibly, in most countries. That's long enough for a mango sapling to grow into a tree that would be taller than me. I compare the imagined mango tree with myself only because I'm a teacher, not because I think I'm worth comparison with a tree. If a mango seed had found root in the summer of 2020, right after the lockdown began, it might have grown to be a teacher in the classroom.

How would its teaching be different from mine?

There are the classrooms in government schools and colleges in Bengal, beside ponds and streams, the playground waterlogged for many months of the year. Often this water climbs up a tiny stair or two to the classrooms and sits there until it is chased out by brooms. But there has been no one to shoo away the accumulated water for months now. The floors would be slippery, slimy with moss. They are also teachers.

How would that change the classroom?

There's also the dust that would have grown a few generations from not being wiped away by school bags, hands and elbows every morning. I see them as teachers now.

What lesson could they bring to the classroom that we have so far ignored?

Then there are the cobwebs that humans cannot stand. Undisturbed for long months, they have now developed advanced neighbourhoods of their own. They are a synecdoche – even when we can't see their builders, we imagine them. Why is it that when we see the Taj Mahal we think of Shah Jahan or when we see cobwebs we think of spiders, but when we see tall rows of flats, we do not think of the anonymous construction workers, engineers and architects whose labour keep them standing on the ground? We do not think of the person who planted the trees by the highway or a solitary tree on a large field. In this difference is perhaps the way we think – or allow ourselves to think – of humanity or our fellow beings.

What lesson could be learnt from this, then – both the cobwebs and our selective imagination about the creators of things, why we think of the singer when we listen to a song but not of the scientists who created the phone we have in our hands or the trees that give us mangoes? What does this acceptance of anonymity for some and a recognisable signature for others tell us about our in-built hierarchies?

All these thoughts come to me as I walk past an abandoned school in a village near Bagdogra in north Bengal. The tin roof of the school building is rusting, the classrooms – not more than three in number – are invisible from this distance. Moss and cobweb and dust have taken over these spaces like humans and their props of concrete and metal took over the land with the construction of this building. What I pass by during my walk is not an undoing of the human act but a new manner of coexistence, not very different from the acceptance of one's knees and limb joints as they age. Grace – and wisdom – is not in trying to return to an irrecoverable youth but in the acknowledgement of what is, what remains, what one has to now make do with. And hence perhaps the nature of my thoughts – what is pedagogy to take from this moment, what are teachers to tell students about this long pause in school-going, what will textbooks – if they do so at all – say about this moment, this long moment? Much as these lessons will come from science, they must come from the undefinable humanness of the heart. If trauma and injuries are remembered, I hope expansiveness and reaching outside its familiar terrain are as well.

Like soil, dust, moss, and plants tried to reclaim spaces that once would naturally have been theirs, I like to believe that the human heart behaved similarly. Forced to shrink by the manners of gross capitalism and extreme individualism, to decrease its perimeter of self-interest to include only a chosen few, this pandemic, where not birth but death made us relatives, forced us to see ourselves as related – that our shadows have no religion or nationalities. And so the heart, naturally restless, began to claim foreign spaces with affection and interest.

It is easy – and dare I say, even silly – to say that "nature was healed" when the world went into lockdown. At first, though, that is what it seemed like – as if nature was a scraped knee or a torn muscle that would heal if it was given time to rest. People reported bluer skies, whiter clouds, better views of the full moon and the mountains, vegetation returning to feet-trampled pathways, plants taking over semi-abandoned spaces, bees and insects reclaiming spaces naturally theirs. This was a parallel narrative, an intentional new myth of creation, as if produced to balance the destruction of human life and occupation all around. Soon, though, this narrative had exhausted itself. It was unavoidable – there was only one emotion: grief and anxiety, the two inseparable. The mind, too, developed two related but opposite kinds of motor movements: the physical withdrawal from the world; and an emotional reaching out to an invisible and even unfamiliar world, a world of strangers, to whom we turned for help, for oxygen cylinders and Remdesivir, or for money for survival, both ours or those we wanted to help. I have tried to imagine these contrary movements visually – the shrinking of the physical space for the human body and the simultaneous expansion of the heart to include those outside the familiar perimeter of relatives, friends, and acquaintances. It is a disproportionate image – the real estate of the heart is larger than the real estate occupied by the physical body. If only such a state of being were longer-lasting, more permanent.

It is perhaps the nature of the living body to be imperialistic – to want to occupy more than is necessary for it: the human's desire to own more than one house, the lion's for the entire forest, moss for an entire wall, and so on. It is, after all, part of the reproductive instinct. I say this even though I know it is obvious – I say this to remind ourselves that the Corona virus was acting from the same impulse, to find as many hosts as it could, even though it isn't recognised as a "living" thing. If it hadn't been so scary and traumatic, it would have been comical. Take the Hollywood imagination for apocalypse, for instance – after the large-scale attacks from dinosaurs and aliens and monsters, what the human species was eventually battling was something so tiny that it was invisible to the naked eye. What an anticlimax this was to the industrial imagination.

All through this I kept thinking of the human heart. I say "heart" even though I actually mean "mana", a word common to many Indian languages, one that combines the mind with the heart. What is its perimeter? How far can it reach? I thought of the elements – air and water and fire and even light, of their limitless possibilities of travel. The heart could accommodate them all and move faster than them – small as it was, it was the most elastic thing imaginable: it could hold as much as one wanted it to, sometimes even including things and beings one didn't want to be there. The heart was, in spite of cramming in as much and as many as one could, never over-populated.

Joy, suffering – they are washed away, like memories of walking or sleeping, such is their rhythm and natural life. They are like seasonal flowers – they will return again, at their own pace, in their own time. What will stay, then, of this time that has felt endless, of fear and restlessness? What will we remember of these moments, these moments that lack differentiation, moments so similar that they would seem like a refrain, like the rain is a refrain only if it hadn't been an unending monsoon? Having lived through a time when news of death no longer shocks like it used to, what happens to the heart?

Like a believer who'd suddenly been given a "darshan" – sighting – of her god, I observed the actions of the human heart during this unexpected and unnatural time. Its centrifugality, its reaching out, its opening up, like the petals of a flower... The analogy made me pause. After flowering there's fruition. What, then, of the human heart? What after this flowering, what fruit?

I am waiting to see the fruit; or for the heart to become moss, to never stop expanding.