In recent years, the rise of the Philippines' literary world has been seen along with female authors' success, the emergence of authors from the countryside, multilingualization, and the Philippine authors' influence beyond the country's borders. In order to reflect this circumstance, we will introduce five short stories in English, Filipino, Cebuano, and a hybrid of Filipino and Maranao (or Meranaw). The writers are five young prominent Filipino novelists, including some who live abroad, producing works in a regional language, and working from rural areas such as Mindanao and the Visayas. The COVID-19 pandemic has put the Philippines in a situation where strict self-isolation measures have been in place for more than a year and a half, since March 2020. Many citizens are still living under stay-at-home orders and travel restrictions.

This issue features Degrees of Separation, a short story written in English by Kristine Ong Muslim. The story is available in English and Japanese. 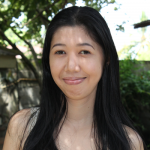 Kristine Ong Muslim is an author, translator, and anthologist who grew up and continues to live in a rural town in southern Philippines. Her books of fiction and poetry include The Drone Outside, Black Arcadia, Meditations of a Beast, Butterfly Dream. WhiteTrain will publish a German edition of her book, The Drone Outside. She co-edited Ulirát: Best Contemporary Stories in Translation from the Philippines (Consciousness), and several other forthcoming anthologies. She is also the translator of at least eight bilingual editions, including Marlon Hacla's Melismas. Widely anthologized, Muslim's short stories were published in Conjunctions Dazed Digital, and World Literature Today and translated into Bulgarian, French, Polish, and Serbian.

What came home that day from a two-week stay at the quarantine hall in downtown Avenida still looked like the same Romina Dansel who was the fledgling weather girl for TV5. As she entered the Laberinto residential apartment building through the revolving glass doors and headed for the stairs, she absently scratched at the string looped around the back of her ear, the string that held one end of her face mask.

Romina had moved in some two months ago to the second floor of the building, to the one-bedroom unit across number 21—home to the Lagron couple and their fourteen-year-old daughter Jade. And just like everybody else in the building, she remained unaware of what was happening behind the closed doors of number 21. She could not see, for instance, Jade Lagron in her straw-lined nest in the corner of unit 21's living room. With her left ankle enclosed in a metal restraint, Jade struggled to orient her body in a position that would help reduce the painful contractions in her belly. The contractions were coming in with increasing regularity. In the kitchen, her parents eagerly waited for the 24-karat golden egg that was due every nine months from their daughter.

Two floors up, down the small balcony at the end of the fourth-floor corridor, Dominador Mangla and Wesley Mapa, two of the building's longtime tenants, were at it again, their good-natured banter echoing pleasantly to mingle with the white noise of the streets outside, the footfalls and the clicks of latching doors secure their frames. "Knew a man from Mindoro," Dominador would probably say this time, as he never seemed to run out of stories. "Born with a screwed-up wiring in his eyes. He could only see in black and white. But when he turned 44, his vision suddenly righted itself and he could finally see in color, just like us. He went insane the next day. All that sudden explosion of colors that half of his lifetime did not prepare him for." And Wesley, who would die of complications from his lung cancer in two weeks, would respond gamely, "You just made that up, didn't you?"

Entering her apartment, Romina noticed one of the windows she must have forgotten to lock during her rush to leave the building two weeks ago. The bright light through the sliding glass window was starting to fade—though the mark was still not that obvious for now—the PVC floor's convincing pattern of wood grain. The future—what was left of it—pressed darkly against the beige walls.

What have you been up to while I was away, she said under her breath, carefully peeling away the sticky tape that held one corner of an oversized poster, a reproduction of Hokusai's iconic The Great Wave off Kanagawa, the only thing she had that time that could be used to hide that part of the wall and to hide it without eliciting suspicion.

Beneath the poster was a small ragged hole of pitch-black emptiness. It looked like a hole, as far as she could tell, and it appeared hollow on the other side. It absolutely did not look like a part of the bedroom wall—or even a natural part of this world. A hole in that area would have shown the view outside the building—a bit of the skyline and maybe a glimpse of the streets below. It—whatever this anomaly was—appeared the morning of the day after she had moved in around two months ago. It was as if her presence had teased it out of hiding.

Roughly two inches in diameter, the hole opened out to nothing, a black hollow stillness. It was cold on the other side of the hole. How cold—she could only gauge by feel. She once tried inserting a thermometer through the hole to measure ambient temperature, but it would not give a readout. A flashlight would illuminate nothing inside the hole, either. She trapped some ants inside a container that she dangled through the hole; the ants were unaffected, still busily collecting the bread crumbs she had placed on the bottom of the container. She tried all sorts of things during the first month since the hole appeared, even dangling a video recorder or chucking a variety of objects that would fit into the opening and then listening for a plink, a splash, any ensuing sound. Nothing. Behind the hole was all blackness and silence. It could be a neverending vastness in there, an ever-expanding space where the lost stayed lost because they were not meant to be found—if found meant being named, labelled, possibly owned. Maybe it converted everything to nothing. Or, a purposeless and harmless pocket of nothing. So far, the only thing that yielded results was a compass. She used the toy compass in her keyholder, which was embedded on the belly of a plastic panda. She pried it off, attached it to a pen, stuck it through the hole. The red end of the magnetic needle, which indicated north, swung to the exact opposite readout for north on her side of her hole.

Satisfied that all was well with the little lightless artifact on her apartment wall, Romina replaced the Hokusai poster. In the kitchen, she measured rice and water into the rice cooker, added the drained contents of two cans of dry peas, a can each of baby corn and mushrooms, and then clicked the Cook button. Drizzled with soy sauce and seasoned with black pepper, this rice-veggie combination had been her go-to quick meal since college. She would eat later while dealing with correspondence from work.

She hastily unpacked the contents of her travel bag, tossed her dirty clothes onto the overflowing hamper, stowed away the few paperback books—all beach romances about young and physically attractive characters engaging in lots and lots of sex as if the isolation tent where she had just spent the past two weeks was a seaside holiday—that she had managed to grab after the call about her test turning positive for the virus and the plans for her two-week quarantine. She had been vaccinated, as was any TV5 employee, long before she contracted the virus; the quarantine, its associated minor inconvenience notwithstanding, was simply a matter of helping curb the spread of the disease in the island city of Avenida.

Elsewhere in the country, medical workers held protests because the government kept delaying the payment of risk and overtime allowances; regional hospitals strained to their full capacity, coping with increasing cases of kids, all too young to be vaccinated and required hospitalization so they could survive the onslaught of the virus strain that only affected young people. An investigation was heating up about the president's involvement in a dummy corporation supplying overpriced sets of personal protective equipment.

Meanwhile, wildfires raged in Turkey, in Oregon, in South Okanagan. Flash floods in Germany and India. Another chemical spill in Wellington. Exxon Mobil—which covered up in the 1980s the findings on the oil industry's culpability in the climate crisis—released an expensively produced Earth Day ad, where a Hollywood celebrity, clad in a skintight outfit decked with zebra patterns, was seen sipping a green beverage through a bamboo straw.

That night in bed, Romina thought she had new insight on the nature of the hole on her wall, that wall of emotionless muted beige, the hue that was not normally associated with catastrophe. But she was too tired to get up to see if it would work. Perhaps tomorrow, if there was still a tomorrow.