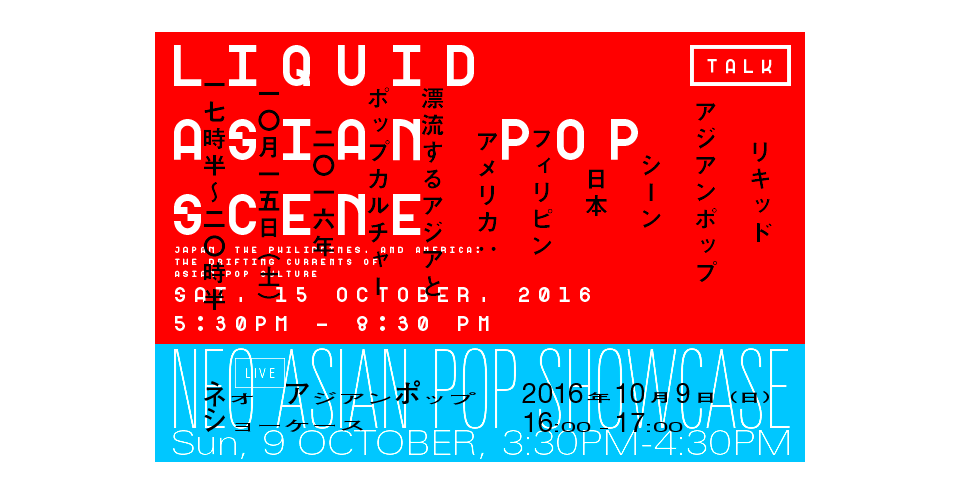 New Movements in Pop Culture and the Internet.
Experience the New Asia through Music.

The Japan Foundation Asia Center will hold the talk event “Liquid Asian Pop Scene” and the Music Showcase "Neo Asian Pop Showcase" that gives a glimpse at the contemporary Asian pop culture scene and provides a new vantage point on Asia through music.

Talk Event
“Liquid Asian Pop Scene－Japan, the Philippines, and America: The Drifting Currents of Asian Pop Culture”
Changes to the way music is created, distributed and appreciated, such as online streaming services like YouTube and SoundCloud, have ushered in an entirely new music scene. This forms part of a broad movement of communities and international networks that bypass the conventions of the commercial music industry and intersect freely with fashion, business, and events . This talk event invites speakers from Japan, the Philippines, and the United States to introduce the music scene and netlabels (online music labels) in their respective regions, and discuss how contemporary culture is being shaped by the proliferation of online tools and platforms. How do all these divergent cultures influence each other? How will they evolve from now? By decoding the impact of various aspects of pop culture across Asia, the talk showcases contemporary culture in the region that has been brought to the fore by our shared foundations of pop culture and the Internet.

Music Showcase "Neo Asian Pop Showcase"
The growth of social media has democratized global tastes and communication like never before, and a new generation of artists is today revolutionizing the various aspects of pop culture that exist in Asia. The Creators, one of the three main programs of Fukuoka's Asian Party, hosts “Neo Asian Pop Showcase,” introducing three leaders in the contemporary Asian electronic music scene. While seemingly far removed from our traditional images of Asia, these music artists from Japan, the Philippines, and the United States intersect and play with all kinds of elements to present a radically new “Asia.”

Event detail of the talk event

Event detail of the music showcase