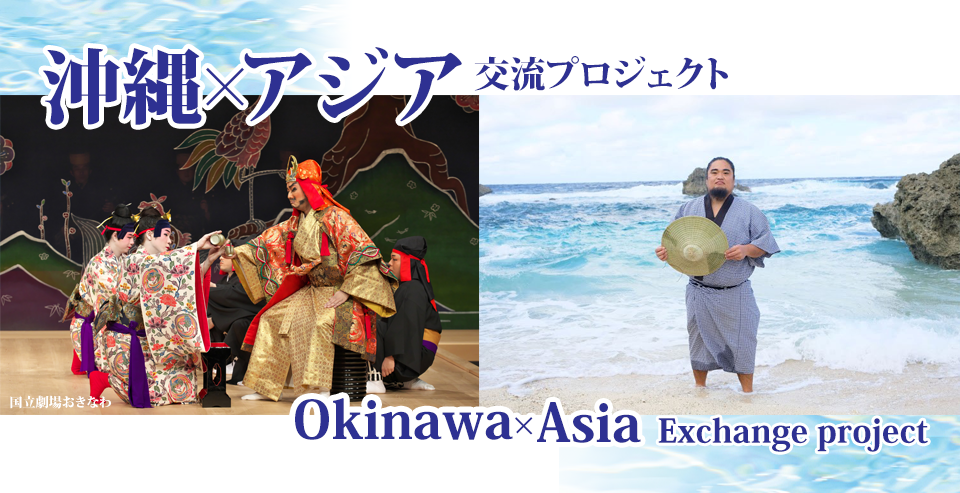 From January to February 2022, Japan Foundation Asia Center is implementing a series of lectures and cultural exchange events which connect Okinawa and other Asian cities/regions online.
Okinawa and Asia have been historically exchanging many kinds of information through the sea since ancient times, and have influenced each other in various fields of culture. In this project, we will take up a wide range of themes such as "Sustainable tourism" and "Traditional culture and modern life" to deepen mutual understanding through interaction and dialogues.

The 5th exchange event connects Yonaguni Island and Singapore on the evening of the same day, with participants from the Yonaguni Island displaying local dancing and Kuba craftsmanship.

for 4th and 5th events

YONAHA Yuu is a Kuba craftsman and musician. Born on Yonaguni Island, he has participated in island festivals since he was a child and learned classical music and folk songs through the Local Entertainment Course of Haebaru High School (on the main island of Okinawa). After coming back to Yonaguni Island, he mastered the folk songs and traditional songs of Yonaguni. He actively participates in events on the island, live performances in Okinawa and other prefectures, and CD releases. Furthermore, he makes folk tools from the Kuba collected on the island, and holds workshops in various places and writing columns for newspapers to disseminate Yonaguni culture.

YONAHA Keiko is a Kuba craftswoman and Ryukyu dancer, who graduated from Okinawa Prefectural University of Arts. She has appeared on a tour featuring Okinawa traditional dance and music in the two African nations of Tanzania and South Africa with eight selected members from the alumni association of Ryukyuan Performing Arts Major at Okinawa Prefectural University of Arts, which was hosted by the Japan Foundation in commemoration of the Japan-Africa Exchange Year in 2008. She, together with YONAHA Yuu, is engaged in making Kuba crafts, playing music, teaching Ryukyu dances, and managing the Yonaguni horse ranch. In the Ritou Fair 2021 (Okinawa's islands exhibition), she won the special award in Excellent Specialty Products with her craft kit called Un, which allows anyone to easily make a fan from Kuba leaves.

Yonaha Mingu was opened in 2017 by folkcraft artisans of Yonaguni Island. In addition to making folkcrafts, it stages workshops to introduce Yonaguni Island, and it also holds exhibitions inside and outside of Okinawa Prefecture. Inside the Yonaguni Island, it provides opportunities for kindergarten and elementary school children to experience folkcraft making firsthand and conveys old island wisdom for everyday living. It also conducts exchanges with Taiwan and is seeking to expand its network of song, folkcrafts and cuisine.

She was born in the house of a Noro priestess, who takes charge of local religious services, in Yaese Town, Okinawa Prefecture. She made her debut as a radio personality while at senior high school. She has appeared in numerous radio and TV shows, commercials, drama shows and stage performances and has learned Okinawa theater, opera, Kumiodori and modern theater as an assistant director. As a trainee under the overseas study program for upcoming artists of the Agency for Cultural Affairs, she studied in France and made her debut as a director at the Festival OFF d'Avignon. She has received invitations to stage her works, which primarily comprise Ryukyu performing arts, at international theater festivals around the world and at theater venues including the Sydney Opera House. She conducts activities that link Okinawa with the rest of the world primarily on the stage.

This percussion troupe comprises five traditional percussion instruments, namely drums, gongs, cymbals, small cymbals, and small gongs. Made up of elementary schoolchildren from Dongyin Island, it performs at the god of White Horse King's annual march which is the island's largest festival, enlivening the proceedings by playing to the unique rhythm that has been passed down in the local area of Dongyin. Just over 10 years ago, a group of women, who were concerned that the declining child population would cause the local festival culture to disappear, established a women's percussion troupe. Together with the elementary schoolchildren's percussion troupe, this has become an essential presence in the festival.

Matsu Biennial is an international biennale which was established with the objective of letting people rediscover the attraction of the Matsu Islands. This is the inaugural Matsu Biennial. The Matsu Archipelago, which consists of the northernmost islands of Taiwan (Dongyin, Beigan, Nangan, Dongju, Xiju), is scattered with the remains of former military facilities and they have become symbols of the islands. Through various artworks, creative activities and events with the themes of education, architecture and design, the Matsu Biennial aims to transform the island from "Matsu seen from the outside" to "Matsu telling from within".
https://matsubiennial.tw/

This group of young people introduces and practices "new thinking" for the regional revitalization of Dongyin to an audience both inside and outside of the islands. Following its formation in 2019, the group has staged numerous exhibitions related to their hometown as well as participatory workshops for residents focusing on the local aesthetic value. It also jointly organizes various events in cooperation with local governments and general organizations.
https://www.facebook.com/watch/saltyislandstudio/

Born in Okinawa Prefecture. Graduated from the Ceramics course, the Dept. of Living Design, Joshibi College of Art and Design, and the Weaving course, the Dept. of Design and Crafts, Okinawa Prefectural University of Arts. After graduation, she moved to Kume Island to learn weaving from her grandmother who was a weaver of the Kumejima Tsumugi (traditional crafted pongee silk made in Kume Island). She has worked as a curator in Kumejima Museum and is in charge of the protection of Kumejima Tsumugi, an intangible cultural asset. She is particularly active in educational activities, visiting elementary schools, junior high schools, high schools, and cultural facilities in and outside of Kume Island to give classes on cultural properties, especially Kumejima Tsumugi.

She researches community-led development, including the utilization of traditional knowledge of indigenous peoples and local communities as tools for local growth. In particular, she has rendered distinguished service in research of Pua Kumbu, the traditional textile of Sarawak State in Malaysia, and her research has produced a few journal publications and engaging with the public through a series of educational polysensory exhibition since 2015, locally and internationally that aimed to promote the intangible knowledge of Pua Kumbu.

Born in Hiroshima Prefecture. After graduating from University, she worked as a freelance writer in Tokyo for about 20 years, working in a wide range of genres. In 2009, she moved her home base to Okinawa for the launch of the magazine "Momoto*". In addition to being the editor-in-chief of Momoto, she is involved in planning PR magazines and travel products for resort hotels in Okinawa and engaged in talk events, lectures, coordinating peace education programs. She is also the vice president of NPO Shuri Town Building Research Society, board member of "Itoman Hukaki Sabani Shinko Kai", representative of "Wakaume-kai" (a volunteer group to inherite the commemorative ceremony of the Shiraume Gakutotai (Student Corps)), secretary general of "Hakubai Inheritance Association".

* A quarterly journal which transmits in-depth information about Okinawa's nature, history, culture and traditions to all over Japan.

2nd Exchange Event: What is Sustainable Tourism for the Region? – Taketomi Island×Penang

Ethical Island Taketomi
Ethical Island Taketomi is engaged in projects to clean the sea of Taketomi Island and to support the future of the island's children. They conduct island beautification campaigns, including picking up drifted trash that washes up on the shore, as well as providing educational and experiential opportunities for the island's children. So far, they have conducted beach cleanups, microplastic pickups, workshops on marine debris, observation of living creatures in Amparu (mangrove forest) on Ishigaki Island, exchange meetings with children learning about SDGs, Halloween parade wearing costumes made from trash, and making Christmas trees from plastic bottles washed ashore.

Born and raised on Taketomi Island. Works at a guest house, Izumiya. A member of the Hazama Performing Arts Preservation Society. In addition to working as a representative of Ethical Island Taketomi, as a director of the Taketomijima Regional Foundation, he is also involved in various activities such as the extermination of invasive plants, cultivation of traditional crops, beach cleaning, and upcycling of ocean plastic bottles into fiber.
He is also a member of the Taketomi Island Community Landscape Preservation Committee, and is working for the preservation of Taketomi Island's traditional buildings.

Dr. Ang Ming Chee is the General Manager of George Town World Heritage Incorporated and an accredited facilitator for UNESCO Global Network of Facilitators on Intangible Cultural Heritage. Graduated from National University of Singapore in Doctor of Philosophy (2011), she specialized in resource mobilization, project management, and risk assessment. Born and raised in the inner city of George Town.
She carries her duties with much passion and fervor, incorporating innovative ideas and holistic management on World Heritage Site for the benefit of the local people.

1st Exchange Event: What is Sustainable Tourism for the Region? – Shuri×Hue

Connecting the Shuri district of Naha City, Okinawa, and Hue, a city in central Vietnam, we shared information and exchanged opinions on the issue of "overtourism" in both cities, and how local people and tourists can coexist in tourism.

Established in 2005 with the aim of promoting economic and cultural development in the Shuri area by revitalizing the community in Shuri area and educating people about Shuri culture. They are engaged in activities related to the community development of Shuri, to create "cultural city with a stately character where peace, beauty, liveliness and history prevail". Currently, the President and Vice-President of the society attend government committees that study the development of the Shuri area. As a local group, they are also involved in the Shuri Castle reconstruction event organized by the prefecture, and regularly hold community collaboration meetings to connect local groups with the Okinawa Churashima Foundation, the administrator of Shuri Castle Park.

Architect. Born in Naha City. Graduated from the University of the Ryukyus, Department of Construction Engineering. In 1997, he established Gikuukan Design Studio and became its president. He has been working on simple and modern architecture, from private residences and apartment buildings to public buildings, using a lot of flower blocks that suit the climate of Okinawa. He is also the president of the Okinawa branch of the Japan Institute of Architects, an advisor of urban design for Naha City, and a member of the Naha City Urban Landscape Council.