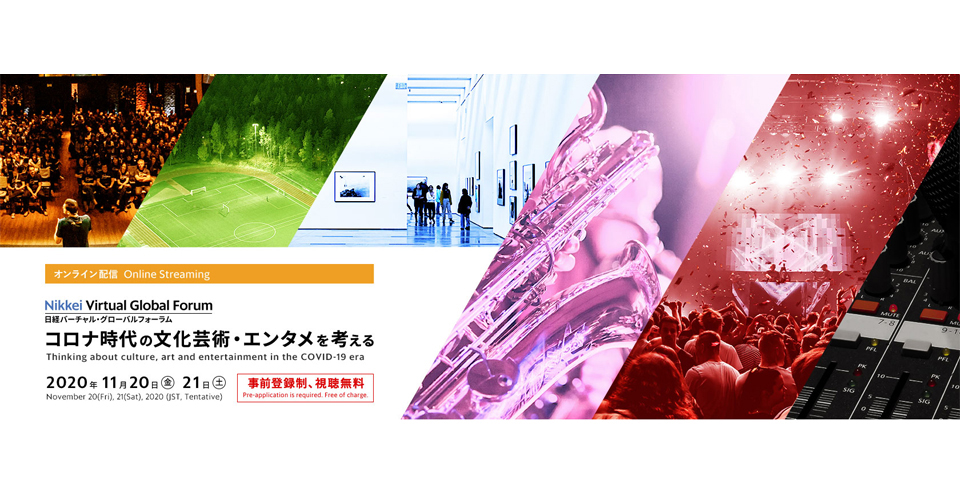 As the coronavirus spreads across the globe, interaction among people is restricted, and continuing international projects has become a struggle for many. The Japan Foundation Asia Center is no exception, and it now faces a challenge in continuing projects that are implemented to connect people beyond national borders.

During this situation, the Japan Foundation has reaffirmed the importance of its mission of "cultivating friendship and ties between Japan and the world," and found it necessary to implement projects with a new perspective and approach. This has led to our participation as a special sponsor of the "Nikkei Virtual Global Forum: Thinking about culture, art and entertainment in the COVID-19 era," organized by Nikkei, Inc.

Among the various sessions held in the two-day forum, the following two sessions will focus on the international projects of the Japan Foundation Asia Center, implemented with the Southeast Asian countries. Guests from the respective fields will discuss the achievements of their projects and consider the future activities to connect people beyond national borders in the COVID-19 era.

The past, present and future of the football exchanges between Southeast Asia and Japan

The Japan Foundation Asia Center, the Japan Football Association (JFA), and the Japan Professional Football League (J. League), have been promoting football exchange to foster football talents in Southeast Asian countries and share the knowledge and experience of Japan's football. In this session, TASHIMA Kohzo (Council Member, FIFA / Executive Committee Member, AFC / President, JFA) and KOGA Takuma, having extensive coaching experience in Southeast Asia, will discuss the achievements of the project and the role of football in the COVID-19 era. TAKECHI Yukinori, Senior Staff Writer of Nikkei, Inc., experienced in writing numerous football articles, will be moderating the session.

International Exchange in the Performing Arts and Prospects After COVID-19

In this session, we would introduce SCOT (Suzuki Company of Toga)'s diverse international activities in the field of performing arts over the years, along with some episodes of the theater production "Dionysus," an international collaborative project with Indonesia, co-organized by the Japan Foundation Asia Center. SUZUKI Tadashi, the founder and director of SCOT, will share his views on how the global spread of COVID-19 has affected SCOT's activities, and the prospect for the future of the performing arts. KONO Takashi, theater critic and journalist, will be the interviewer.

Tashima Kohzo was born in Kumamoto, Japan in 1957.
He became interested in football after watching a football match at the 1964 Tokyo Olympics and established a football team with his classmates in junior high school. During his senior year at Saitama Municipal Urawa Minami High School, his team won All Japan High School Soccer Tournament. After graduating high school, he entered the University of Tsukuba to become a teacher.
In his junior year as a university student, he was selected to the Japan National Team and played as Forward (FW). After graduating from university, Tashima joined Furukawa Electric FC to play in the Japan Soccer League (JSL).
In 1983, in order to pursue coaching education, he studied at the German Sport University Cologne and received a coaching license in Germany. In 1996, he acquired JFA S-class coaching license. Tashima became a coach for the U-17 Japan National Team in 2001 and led the team to the FIFA U-17 World Championship (currently known as FIFA U-17 World Cup).
Following his tenure as JFA Executive Committee Member, General Secretary, and Vice President, he became President of JFA in 2016.
Tashima also serves as Council Member of Fédération Internationale de Football Association (FIFA), Executive Committee Member of Asian Football Confederation (AFC) and Vice President of East Asian Football Federation (EAFF).

Koga Takuma was born in Shizuoka, Japan in 1969.
His football playing career includes Juntendo University, Jubilo Iwata, Shimizu S-Pulse and Cerezo Osaka. In 2011, as a JFA official licensed coach, he was dispatched to Singapore to coach for Youth National Team, followed by assignments as U-19/U-21 East Timor National Team coach and Myanmar Football Academy coach. Since February 2020, Koga leads U-15 JFA Academy Fukushima as coach for the development of youth football in Japan.

Takechi Yukinori was born in Hyogo in January 1961 and is a graduate of Waseda University.
In 1984, he joined Nikkei Inc. and was assigned to the Sports News Department. Since then, he has specialized in sports reporting including on amateur sports, sumo wrestling, baseball, and soccer.
After assuming the post of the head of the Sports News Department, Takechi became a Senior Staff Writer.
He has covered eight FIFA World Cups since 1990.

Born in 1939, Suzuki Tadashi is the founder and director of the Suzuki Company of Toga (Scot) and chairman of the Toga Cultural Foundation. In 1982, he organized Japan’s first international theatre festival, the Toga Festival. In addition to his international collaborations, productions and performances, he has also developed a unique actor training method, the Suzuki Method of Actor Training. In 1994, he established the BeSeTo (Beijing, Seoul, Tokyo) Festival, jointly organized by leading theatre professionals from Japan, China and Korea. Member of the Theatre Olympics International Committee.

Kono Takashi was born in Tokyo in 1950.
He studied Arabic at Tokyo University of Foreign Studies, and after graduating, he joined Nikkei Inc.
in 1974. He was posted in various cities overseas including Teheran, Cairo, and London, and in 1995, he became a member of the editorial committee in the Cultural News Department at the Tokyo Headquarters, where he was in charge of the areas of theater and religion.
Since leaving Nikkei Inc. in 2015, he has periodically written stage reviews and culture columns for newspapers, theater papers, and online news websites.