Indonesia, the country which embraces the largest Muslim population in the world, enjoys a profound level of religious, cultural, and linguistic diversity within its boundaries under the national motto of "Unity in Diversity." While the Indonesian constitution guarantees freedom of religion, it is undeniable that Islam has played an important role in the stability and development of the nation. For instance, Islamic civil organizations in Indonesia are active in organizing and providing social services for the community, which, in Japan, are usually delivered by educational institutions or non-religious organizations. In this interview, Dr. Ayang Utriza Yakin, the young intellectual of Nahdlatul Ulama (NU), the largest Muslim organization in Indonesia, talked about Islam in Indonesia, its distinctiveness and social contribution, what the true jihad is, and his future aspirations for the following generations to come. 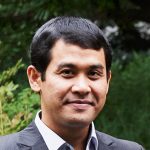 Born in Jakarta in 1978. Graduated in Islamic law from the State Islamic University (UIN Jakarta), Jakarta. Studied Islamic law at the Al-Azhar University, Cairo, and completed his MA and PhD in History and Philology at the École des Hautes Études en Sciences Sociales (EHESS), Paris. He was a visiting research fellow at the Oxford Centre for Islamic Studies (OCIS) of the University of Oxford (spring 2012), and a visiting fellow at the Islamic Legal Studies Program (ILSP) at Harvard Law School (spring 2013). He was Saiful Mujani Research Fellow at the Center for the Study of Islam and Society (PPIM) and is lecturer at the Faculty of Sharia and Law at UIN Jakarta. He has been teaching and conducting research on a wide variety of topics in Islamic Law, Adat [customary] Law, legal history, Islamic philology, Islamic history, and Islam and the Muslim communities in Indonesia. He serves as vice chairman of the Mosque Management Institute (LTM) of the Central Board of Nahdlatul Ulama (PBNU), the largest Islamic mass organization with almost thirty to eighty million members in Indonesia and abroad. He was a fellow of the Asia Leadership Fellow Program (ALFP) in 2016 and is currently a postdoctoral fellow at the Université Catholique de Louvain, Belgium.

From the Global Academic World to a Local Primary School

Emiko Fujioka (hereinafter Emiko): First, could you tell us about your past experiences and your present activities?

Ayang Utriza Yakin (hereinafter Ayang): I spent a lot of time studying in Indonesia, Egypt, France, the United Kingdom, and the United States. Besides that, I participated in many activities to serve my community as the ustaz [teacher of Islamic religion] for children and their mothers. In Indonesia, many mothers do not work outside; they stay at home and take care of their children. In the afternoon, they go to the nearest mosque to attend a gathering of a pengajian [Islamic community] where I always give some lessons. This is a very important involvement within our society. As you know, Indonesia is a very large country with a population of 250 million. We are trying to empower women and to give our children the best education, but the government cannot provide everything. So, as members of a civil society, we have to contribute even though our role may be small. That's why we teach the children in the mosque or in a small hall about religious and general sciences.

I have also been acting as director for a private primary school in Bekasi, West Java. I took over the role of director of this primary school three years ago, in 2013, after I returned from France and the United States. Can you imagine? Right after obtaining a PhD from Paris and a post doctorate in Harvard, I got a job at a primary school in a rural part of Indonesia. It was very difficult at first. The question is, "Why do I do this?" Many Indonesian Muslim intellectuals are reluctant to work on grassroots levels after getting their MAs or PhDs; they live in an ivory tower. So what I have been doing for the last twenty years is to be actively engaged with the community, contrary to many of my colleagues and friends.

Emiko: Yes, I can imagine. You jumped into a totally different world: from Western academia which requires a high level of intellectual thinking, to a local primary school in Indonesia where you have to take care of small children.

Ayang: I did a lot of things for the primary school. I developed the curriculum and management system, equipped the school with computers, and empowered the teachers. I cooperated with my colleagues who are working in universities and also with embassies, especially with the French Embassy. I have a good network in France as I graduated from a French institution and lived there for seven years.

Emiko: How have you used your French networks for the children?

Ayang: In the first year, we decided to teach the French language and culture in addition to Arabic and English. But some of the parents complained. They said, "What are you doing? French is not an international language. What we need is more English courses, not French." Nevertheless, I was really stubborn and kept fighting to implement this cultural exchange. After one year, the children were able to speak simple French conversations and sing French songs and the parents were very delighted with the outcome. Children from six to twelve years old in our school were exposed to diverse languages and cultures which helped to open their minds. Children should be educated to be open-minded from the early stages, I think, so that it can lead to create a better future for the country.

Education is the Key

Emiko: Could you tell us about your own childhood?

Ayang: I was born and raised in a family where I was taught that the most important things in life are honesty, knowledge, and wisdom. My father used to work for a private company, but then he left the job to be a ustaz. He still preaches even now. My mother was a very simple housewife with five children. Seeing my father, I knew how difficult it was to live as a teacher: when I was small, we could eat only rice with some salt because we didn't have anything. From that point, I thought the only way to overcome our precarious condition and make our lives better is to get educated. Wisdom and knowledge will make you rich. "Rich" not in monetary terms, but in terms of life experiences, contributions to the society, and networking. I said to myself that I would do my best in my studies and dreamed of studying abroad to even earn an MA and PhD.

Besides being the ustaz for my community and the director for the primary school, I am also giving lectures at the State Islamic University of Jakarta. To be honest, being a lecturer in Indonesia means you have to be ready to live as a poor man. In Indonesia, the wage of lecturers in universities or school teachers is very low. But I am prepared for that because I think this is how I can contribute to my country after studying in various countries. I have to provide our young generation with motivation and support them to "dream." In Indonesian local wisdom, we have a proverb, "gantungkanlah cita-citamu setinggi bintang di langit" [dream the impossible to reach the stars.] My senior generation went abroad and they talked about their experiences to us and encouraged us. It is precisely their encouragement that gave us the dream to study abroad. Indeed, to dream is important, but you must also realize them.

Next Page
Challenges in the Indonesian Society and the True Jihad