Lifepatch are a citizens' initiative in the arts, science, and technology based in Yogyakarta, Indonesia known for its local community activism and global scope of operations, and its superlative mixing of analog and digital technology. Winners of the Digital Communities Honorary Mention at Prix Ars Electronica 2014, the prevalence of DIY (Do-It-Yourself), especially DIWO (Do-It-With-Others), culture at the heart of their practice is deeply rooted in Indonesian culture. At the same time, in this indigenous spirit we can also witness a profound and honest synchronicity with today's rapidly growing phenomenon of the "democratization of technology:" enabling more access to more technology for more people, such as can be found in the popularization of online sharing platforms and open-source hardware and software. In this interview, Minoru Hatanaka, Chief Curator at leading Media Art institution in Japan, NTT InterCommunication Center [ICC], sat down and spoke with three members of the Lifepatch collective who, between them, possess skill-sets as varied as farmer, yoga master, artist, engineer, not-artist, and scientific researcher. 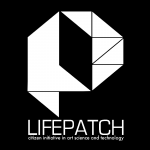 Lifepatch is a cross-disciplinary community formed in 2012. Based in Indonesia and launched by citizens involved is the arts, science, and technology, Lifepatch brings together practitioners to examine, explore, and develop socially engaged projects related to technology, natural resources, and human resources in the local area. The collective also creates installations for art festivals, including the Jakarta Biennale and Biennale Jogja. Lifepatch believes that citizens' initiatives should allow diversity in practice and encourage the creativity of members through collaborative activities. As such, the collective operates with a Do-It-Yourself (DIY) and Do-It-With-Others (DIWO) ethos in its practice in order to stimulate new systems and styles of living and working that develop out of the creative process of individuals and communities, and the interaction between individuals in community projects.
Lifepatch's members aspire to fulfill their mission of bettering the development of human resources and local natural resources, building bridges between domestic and international collaboration, and providing open access to research sources and project results. For this reason, Lifepatch's activities were initially implemented online.
Lifepatch is also conscious of the importance of space as a hub to work, conduct activities, and interact cooperatively with individuals and communities. Such a place becomes a space for mutual learning, discussion, and meeting, and also serves as a physical home for the collective. From this base, Lifepatch organizes workshops experimenting with fermentation technology, programming, and hardware hacking. In addition to running its own studio, the collective works with the Hackteria network, such as hosting HackteriaLab 2014, a multidisciplinary, open-source meeting in Yogyakarta focused on BioArt, ecology' and technology. 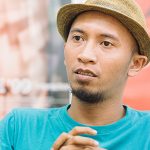 Andreas lives and works in Yogyakarta, Indonesia. He received his formal education in Civil Engineering from Atma Jaya University in Yogyakarta. A dedicated autodidact, he independently studied programming languages during his college years which sparked his interest in interdisciplinary practices, soon evolving to encompass audiovisual creative programming, DIY electronics, sound sculpture, installations, and instrument building. His collaborative activities with local creative communities led him to be a co-founder of several initiatives including breakcore_LABS, a platform for experimental audiovisual performances; urbancult.net, an online site for visual documentation and mapping of street art in Indonesia; and Lifepatch. Together with Hackteria network, he was the co-director of HackteriaLab 2014 in Yogyakarta. 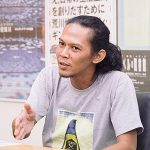 Timbil completed his studies in Chemical Engineering at the University of National Development Veteran Yogyakarta (UPN Veteran). Since 2003, he has been active with local community practices of Yogyakarta, focusing his activities as a citizen scientist concerning local ecology issues and bio-punk movements. One exemplary project was the use of owls as natural predators of pest rodents in rice farming. Working with local farmers in the use of this technology, the project managed to successfully reduce the need for harmful chemical pesticides in the ecosystem, and gradually restored owl habitats. In 2010 he created Intelligent Bacteria: Saccharomyces cerevisiae (IB:SC), an art and science project of safe wine ethanol fermentation in collaboration with the Laboratory of Microbiology of the Faculty of Agriculture, Gadjah Mada University (UGM), Yogyakarta. This project was awarded the transmediale Award for 2011. 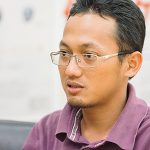 Akbar is currently studying at the Department of Biological Production Science, Tokyo University of Agriculture and Technology (TUAT) as a researcher in the field of Agricultural Biotechnology. His hobby is making equipment which sometimes he himself does not know the reason why he made it. Currently, he lives in Ami Town, Inashiki District, Ibaraki, Japan. He is interested in Do-It-Yourself (DIY) biology and the development of generic low-cost lab equipment. Now he is working on the Introduction of Open Platform Ubiquitous Environment Control System (UECS-Pi) for Greenhouse Management at Ibaraki University, and his Ph.D research at TUAT is on the molecular mechanisms of heatshock-induced resistance on tomato plants.

Hatanaka: It's great to see you all again. Let's start off at the beginning. Please explain how Lifepatch was formed.

Timbil: We started as friends, actually. Especially Andreas and me, we've been longtime friends; he knows my family, my brothers. Most of our Lifepatch members began as longtime friends. Yogyakarta is a small city; we can easily hang out together. Then we started doing things together...it all began like that.

Andreas: Officially-speaking, we formed Lifepatch on March 26th, 2012. There was a geek festival in Bandung, West Java. It was called GeekFest 2012. It sought to show young people that Indonesia has a huge potential in the creative industries, to promote original creative work related to technology by Indonesian youth, and to introduce the people behind the scenes of important goods and services. Timbil was going there to do a workshop about creative uses of fermentation; I was going to do a programming workshop. We were all going to make our little installations and conduct workshops, so we decided to get together and go under the same name. That was our first project as Lifepatch. Since July of 2012, Lifepatch has been based in a house in the Bugisan Yogyakarta area. Besides being a working studio, it is also our house, and functions as an important venue for workshops, film screenings, and presentations. In 2013, we needed to make ourselves into a formal, legal organization because that would make things easier; it would enable more opportunities for us to connect with other institutions.

We'd been working together for a year on various activities when we decided to register as an LPPM (Lembaga Penelitian dan Pengabdian Masyarakat [Institute for Research and Development for Community Service]). Basically, we were already doing what an LPPM does. Previously, our collective's name had only referred to art, and the scientists and engineers among us were uncomfortable with that. We needed to make a format that was common for all of us. And, for that, I liked this idea of a "citizens' initiative" so I proposed it to the guys, and here we are: Lifepatch—citizen initiative in art, science and technology.
Initially, we decided on the name Lifepatch by simply searching the Internet. We looked at our common interests; a lot of us, the members, are interested in life sciences and some of us like electronics. So we searched online for a domain name based on various keywords from each of our fields and "Lifepatch" just showed up and was available. We liked it because it sounds a bit medicinal, like some high-end alternative medical treatment [laughs].

Hatanaka: What kind of practices did you each have before you became a collective?

Hatanaka: Ok, so workshops enable you to pursue your curiosities, but they also help to identify the problems in society. Your practices and projects, as I understand it, explore concrete solutions for these problems through the use of technology. More importantly, by open-sourcing your practices and solutions, you are trying to make them accessible and usable to people with similar problems and that fact, I think, is what expands your practice as a whole outside the realms of art or community: I get the sense that you actually work with society on a larger scale.

Andreas: True. The thing is, we don't want to limit what we are to one particular genre. People try to call us a hackerspace or a makerspace, *1 and of course we don't mind that. But, although I don't know what exactly we are, I know we're not that. We did check out different hackerspaces, but they're totally different. Makerspaces are different. Art collectives are also different.

*1 Hackerspaces and makerspaces are creative, DIY spaces where people can gather to create, invent, and learn. In hackerspaces the emphasis tends to be more on information technology, especially open-sourced hardware and software development, electronic part engineering, and functioning for people who know something about these specializations. In makerspaces the emphasis is more on providing a wide array of tools and technologies to the general public, including but not limited to information technology, woodworking, plastics, and knowledge about the dissemination of such knowledge through publications and workshops.

Timbil: We ourselves don't know [laughs]. Several researchers have come to Jakarta to try to determine what this "thing" is. But we don't know what the "right" term is for us either. So, for now, it's open. One of the researchers said that there are art spaces and alternative spaces everywhere, but he called us an "also" space. I liked it. It's best to keep our fields, members, participants open: to be something that is not exclusive but also something that doesn't already exist.

Andreas: Another reason we don't define ourselves as a hackerspace is that all of the references that point to hackerspaces basically refer to something that started in computer clubs in the United States in the 1970s. And these notions miss the essential context of Indonesian collectivity that is within our roots. You can go back thousands of years in history to see this. To miss this essential, collectivist nature of our culture is to get lost in the biased questions of hardware or application of hackerspaces, makerspaces, or art collectives. It's better that we just start with another reference now and not make that mistake.

This is very Indonesian. I can give you the example from history: our village security system in Indonesia. Every night, every house takes turns for night watch. And, in front of each house, we have a small container, which used to be wooden, that we cut out from the mineral water bottles to hold small change so that whoever is on watch can buy a coffee to stay awake, basically, and watch the neighborhood. I have to do this when I get back. Everyone does. Once a month.
Lifepatch emphasizes this spirit of DIY (Do-It-Yourself) and DIWO (Do-It-With-Others) by inviting members, and anyone interested, to join us in examining, exploring, developing, and maximizing the functions of technology, both theoretically and practically, and to put them to good use for society and culture. For art, science, and society, in spirit and in our activities, Lifepatch tries to stimulate individual creative processes and interactions between individuals in interdisciplinary community work.