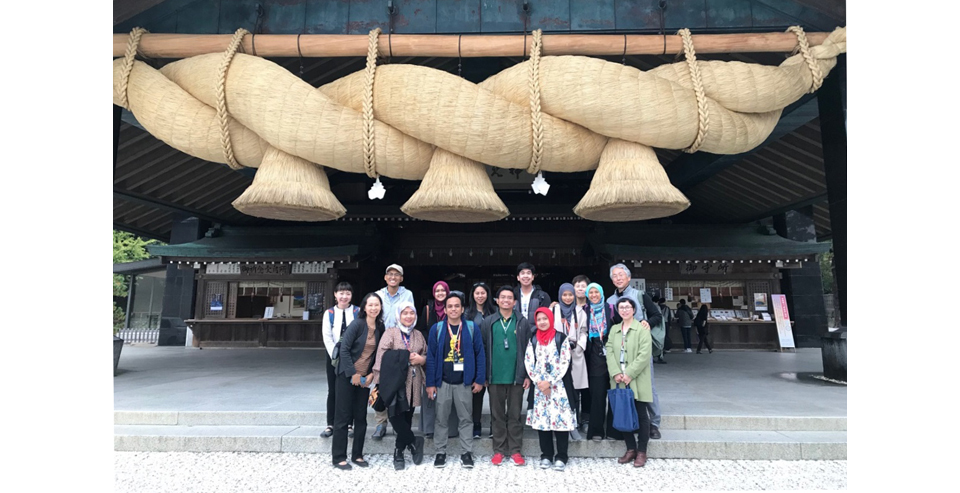 To develop a better understanding of Southeast Asian culture and society in Japan and generate further exchange between the region and country, Talk with Muslims series [TAMU] brings together Southeast Asian and Japanese youths who are engaging in and studying social welfare, community empowerment, and socio-religious affairs into a dialogue to discover each other's cultures, religions, and values.

Japan is now going through a major social transformation resulting from the increasing number of visitors from abroad and demographic changes among others. It is anticipated that more than 30% of the world's population will believe in Islam by around 2050. This suggests that it will become increasingly important for the Japanese public to be familiar with Islam, a religion and moreover a lifestyle of people of the religion.

The Japan Foundation has organized a program to invite young Muslims from Southeast Asian countries to promote mutual understanding between Japan and the region through Islam. As a follow-up of these previous endeavors, the Asia Center will hold an international symposium titled “Embracing Differences and Uniqueness: Implications of Southeast Asian Islam toward an Inclusive Society” on 27 February, 2020 in Tokyo.

In 2018, the Talk with Muslims program [TAMU] will invite ten participants from seven Southeast Asian countries including Brunei and Cambodia. The participants will have opportunities to exchange views with Japanese university students on Islam in Southeast Asia and religious views of Japanese youth. They will also meet young performers of Iwami Kagura, traditional folk performing arts in Shimane prefecture dedicated to the deities of Japanese mythology, to discuss their challenges in exploring new expressions of the living tradition in modern society. In Yamaguchi prefecture, the TAMU participants will gain knowledge of a valuable contribution that Hagi city made in Japan's modernization process through education and human development. They will also learn about contemporary issues presented by the city where industrial revolution assets of the Meiji period are designated as World Heritage Site.

Norma Sari
Deputy Chairwoman of the Central Board, Nasyiatul Aisyiyah

Monaliza A. Mangelen
Legislative Staff Officer II, House of Representatives of the Philippines

In 2017 and under the theme of "The view of nature and life of Japanese people," the Talk with Muslims series [TAMU] will take participants from five Southeast Asian countries on a tour in Tokyo and in Oita prefecture.

To expose the participants to this theme, the concept of Satoyama [combination of sato meaning "inhabited area" and yama meaning "hill" or "mountain"], which is the unique ecosystem that continues in the rice-family regions of Japan, is explored throughout their visit in Japan. As an introduction, participants will view the screening of Satoyama—Japan's Secret Water Garden , a documentary film by NHK (Japan Broadcasting Corporation), before visiting one of the Satoyamas in Oita prefecture. Visits to temples and also viewing Shonai Kagura , a Japanese folk performing art devoted to the worship of the local deity in Oita, are also scheduled for the program. Through these experiences, we hope it will stimulate participants to reflect on each other's forms of religion, culture, and everyday lives. Through TAMU, we hope participants will develop their knowledge and networks to serve as connecting points and bridges between each of the countries to further pursue a deep and meaningful interaction among individuals, communities, and countries.

In 2016, TAMU invited seven participants from five Southeast Asian countries to Tokyo and Iwate prefecture—one of the areas heavily affected by the Great Eastern Japan Earthquake and subsequent damage of the nuclear power plant in 2011—to share with local college and high school students the views and living of religion(s) in each respective country and culture.
As the seven participants introduced their concepts of Islam—as a religion but also as a way of living, of something that is deeply rooted in their everyday lives, and the diverse meanings embedded within the philosophy—it provided the Japanese students the chance to reflect on their understanding of "Islam" and "Southeast Asia."
Likewise, through visits in Iwate prefecture and also the conversations with the local kataribe [storytellers] who were affected by the Earthquake and catastrophe, the participants from Southeast Asia were able to discover the realities of a community recovering from both natural and manmade disasters of such scale.

The Japan Foundation, Jakarta held a seminar-workshop on "Japan and Islamic world through the eyes of Japanese Muslim" at State Islamic University, Sunan Kalijaga Yogyakarta and other two venues in Indonesia on December 15 and 16, 2018. The main speaker for the event was Ms. Essaadi Miwa, a Japanese Muslimah and Secretary-General of Shizuoka Muslim Association, who has been active in promoting multicultural understanding among Muslims living in Japan and Japanese society.

In her lecture titled "We are Muslims in Japan‐New Era of Accepting Islam‐," Ms. Essaadi talked about grand level realities of Muslims living in Japan and various activities initiated by the Shizuoka Muslim Association. Through the two days, approximately 200 participants took part in the event for active interaction. More details are available as attached below.

This event was jointly organized by TAMU alumni members in Indonesia in cooperation with NU (Nahdlatul Ulama) and Muhammadiyah as a follow-up project of TAMU.