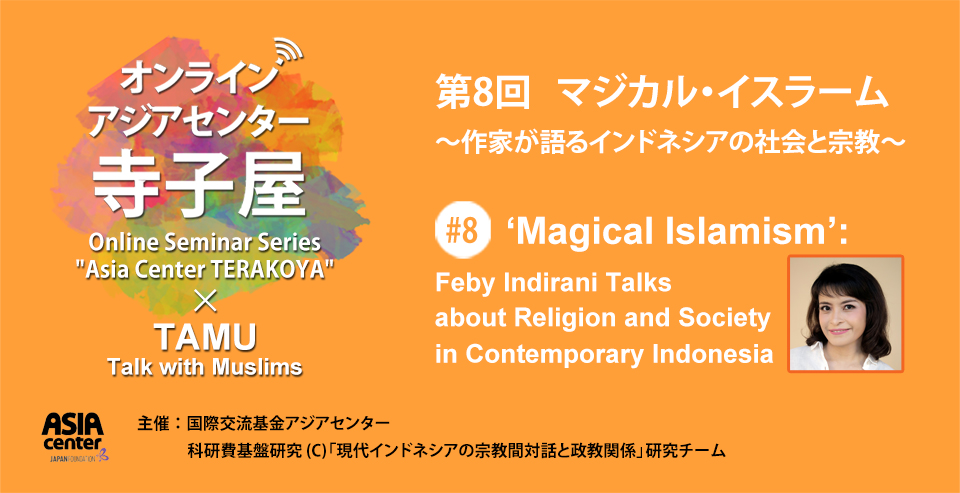 Indonesia, a country traditionally favored a moderate brand of Islam, has recently witnessed the creeping conservatism across the country. Exclusionary movements against other religions and 'unorthodox' Islam have been also apparent. Feby Indirani's collection of short stories, Not Virgin Mary (2017, original title: Bukan Perawan Maria), depicts a sense of crisis in the changing Indonesian society and at the same time hope for those who still stand for long-cherished values of religious tolerance and diversity. Through her humorous, critical yet empathetic approach to Islamic world, which she calls as her own literary genre 'magical Islamism,' the seminar will explore issues related to religion, society and diversity in Indonesia.

The seminar will revolve around the two stories, "Porky Wanted to be a Muslim (original title: Baby Ingin Masuk Islam)" and "Not Virgin Mary" from the short story collection.
To better understand the discussion, please read them prior to the seminar.

* Any unauthorized use, reproduction or distribution of the works is strictly prohibited.

* This seminar is organized under the project, TAMU/Talk with Muslims which aims to promote better understanding in Japan of Southeast Asian Islam and culture.

Feby Indirani is an Indonesian author, freelance journalist and activist. Her works mostly focus on women and minority issues. She is mostly known for her 'magical Islamism' short story collections, Not Virgin Mary (Bukan Perawan Maria) (Pubrikultur, 2017, republished in 2021) and Hunting for Muhammad (Memburu Muhammad) (Bentang Pustaka, 2020). Not Virgin Mary has been published in Italy (2019) and were praised by international media and literary critics for being critical yet empathetic to the Islamic world. While Hunting for Muhammad just recently won national award as The Best Fiction 2021 from Goodreads Indonesia. She got her MA in Digital Media, Culture and Education from University College London.

Nonaka Yo received her Master's degree on the Recent Movement for Jilbab among Secular High-educated Muslim Women in Indonesia in 2005 and got her PhD on the History and Thoughts of Student Dakwah Movement in Indonesia in 2011 both from the Graduate School of Media and Governance, Keio University. Her research interests includes Muslim's lifestyle in Indonesia and Southeast Asia especially among women and young people. She has studied them from the various aspects including women's fashion, student Islamic movement, Islamic novels and films, the Halal issues, etc. Her major publications include Muslim Fashion in Indonesia – Why did the veils of Indonesian Ｍuslimah become colorful? (in Japanese, Fukumura Shuppan, 2015) and others.

Oka Mari served as a special researcher at the Japanese Embassy in Morocco, a lecturer at Osaka Women's University, and an assistant professor at the Faculty of Integrated Human Studies, Kyoto University before assuming her current position in 2009. She is one of leading Japanese scholars in the field of modern Arabic literature and her research areas cover the Palestine Problem and third world feminism.

Born in Tokyo. Designer and artist. Based in Tokyo Camii (mosque), Ghufron Yazid has been involved in a variety of projects that links Islamic teachings and culture by applying his design and artistic skills. He is also leading "Olive," a network to connect young Muslims in Japan.

Urano Risa is currently studying at Keio University and a member of  Yo Nonaka's Lab., a study group on society and culture in Southeast Asia. She studied Indonesian language and culture at Universitas Muhammadiyah Malang in Indonesia and her academic interests include philosophy, Islamic studies, and Southeast Asian studies.