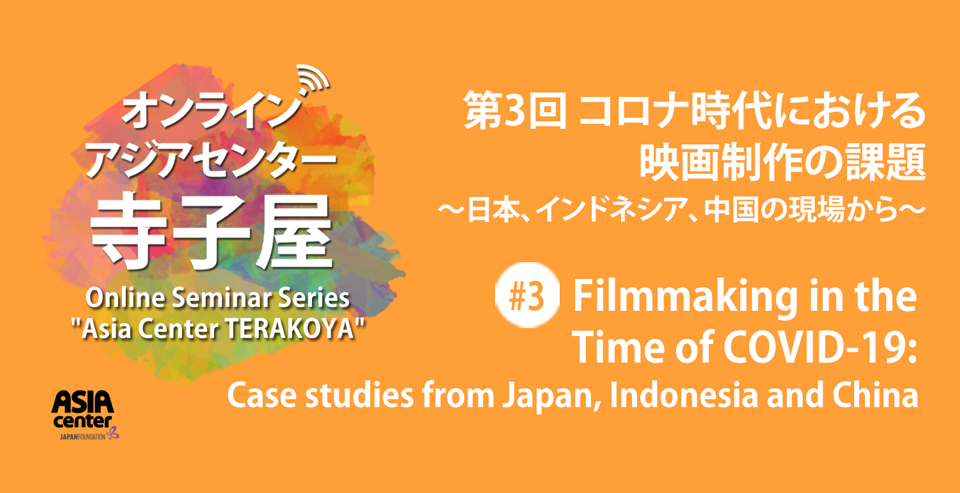 The Japan Foundation Asia Center will host an online seminar, "Filmmaking in the Time of COVID-19: Case studies from Japan, Indonesia, and China," the third in its "Asia Center TERAKOYA" series, on Thursday, October 8, 2020 from 3 p.m. (JST).

As the world has continued to grapple with the spread of the coronavirus, the Asia Center wanted to share the beauty of human bonds through the medium of film. It made Asian Three-Fold Mirror 2016: Reflections, an omnibus of films by three up-and-coming Asian directors and co-produced by the Asia Center and Tokyo International Film Festival, available online for free from April 16 to June 30, 2020. Though this enjoyed a strong reception from audiences, the subsequent situation globally remains severe and people's movements across borders are still restricted. As such, the Asia Center is now continuing its efforts by streaming Asian Three-Fold Mirror 2018: Journey, the second installment in the omnibus series, free online until November 30, 2020 (JST).

Taking this opportunity, the three directors of Asian Three-Fold Mirror 2018: Journey from Japan, Indonesia, and China will share their thoughts about the challenges and prospects for filmmaking in their respective countries in this age of the coronavirus. We hope their discussion in this online seminar offers an opportunity to reflect with audiences on the possibilities of cinema and the unique potentialities that film hold during this time.

Born in Tokyo, Matsunaga Daishi started his career as an actor and then directed music videos and commercials, as well as a TV series, Rescue Fire. His widely acclaimed documentary, Pyuupiru, was featured in numerous international film festivals including Rotterdam, Jeonju and Paris Cinema in 2011. His first narrative film, Pieta in the Toilet (2015), was a smash hit. Vibration: THE YELLOW MONKEY, a documentary about legendary Japanese rock band The Yellow Monkey, was released in November 2017 and screened at the 22nd Busan International Film Festival and the 30th TIFF. In 2018, the adaptation of MURAKAMI Haruki’s novel Hanalei Bay (Starring YOSHIDA Yo) was released. He also directed Love in May, 2020, a series of short drama filmed remotely during the COVID-19 self-quarantine period, which was planned and starred by YOSHIDA Yo.

Born in Surabaya, Indonesia, Edwin obtained a diploma in Graphic Design from Petra University and studied film at the Jakarta Institute of Arts. His first feature, Blind Pig Who Wants to Fly (2008) received the FIPRESCI Prize at the International Film Festival Rotterdam 2009, and his short film Kara, The Daughter of A Tree (2005), was the first Indonesian film to be shown at the Director's Fortnight in Cannes 2005. Postcards from the Zoo (2012) was nominated for a Golden Bear at the 2012 Berlinale. Following the smash hit of Posesif (2017) which won the Best Director Award at the Indonesian Film Festival 2017. His latest film Aruna & Her Palate, based on Indonesian food writer, poet, translator and also novelist Laksmi Pamuntjak’s novel The Birdwoman’s Palate, was theatrically released in 2018 and also screened at 2019 Osaka Asian Film Festival.

Born in Inner Mongolia, Degena Yun graduated from the University of London and earned an MA in Film Directing from Beijing Film Academy. She made her feature debut with Latitude 52 (2012), which was in competition at the Montreal World Film Festival. With her second feature, A Simple Goodbye (2015), she won the Spirit of Asia Award by the Japan Foundation Asia Center at the 28th TIFF as well as screening Torino, Xining and Minneapolis.

Born in 1960, Tokyo. Began researching and critiquing Asian and documentary films after majoring in film studies in Waseda University's Graduate School. He planned and managed an Asia Middle-East Film Festival Series from 1990 to 2007 for the Japan Foundation. He has been a Programming Director of TIFF since its 20th edition in 2007. He concurrently holds the position of the professor and dean of Japan Institute of the Moving Image (a.k.a. Imamura Shohei Film School). He has written several books including "Dynamic Southeast Asian movies - Multicultural, transboundary and solidarity-" published by Ronsosha.