Hiroyuki Muneshige, producer of Black Tent Theatre and Theatre Center Without Walls, spent a year in Vietnam starting in December 2015 on the Japan Foundation Asia Center Fellowship Program. He has since moved his base to Vietnam. As an Asia Center Fellow, Muneshige examined the situation of traditional and contemporary theater while also actively engaging in exchange projects with the locals.
We asked him about the new trends he found in Vietnamese theater, the challenges and issues facing joint theater productions between Japan and Vietnam, and future plans and prospects not only in Vietnamese theater but on the entire Indochina peninsula. Having worked in the theater and performance field in Japan throughout his life, what is it that motivates Muneshige to continue to expand his field of study and activities? 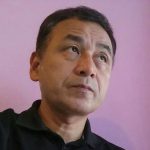 Producer-Director of Black Tent Theatre. Born in 1955. In 1978, Muneshige joined Black Tent 68/71. Through study-abroad and overseas training in former West Germany and in Serbia, he has engaged in theater exchange projects in continental Europe. More recently, he has been involved with grassroots theater troupes in Southeast Asian countries such as the Philippines, Thailand, and Vietnam as he seeks to orchestrate a new "Asian theater movement." He is a member of the Japanese Centre of International Theatre Institute and an executive board member of Theatre Center Without Walls.

Moving Base to Vietnam: What Triggered the Black Tent Theatre's Producer-Director?

Yoshiro Hatori (Hereafter, Hatori): When you spent a year in Vietnam, what kind of things did you experience first-hand?

Hiroyuki Muneshige (Hereinafter Muneshige): I came to understand that Vietnam is one of the few socialist countries in the world, which is something I didn't notice during my one-or-two-weeks stay in the country prior to the Asia Center's Fellowship Program. I realized that there were many people involved in theater who, surprisingly, had not questioned or reflected upon what theater really is or why we do it. Not addressing political or social problems as the core message of the play is part of what defines a socialist system, so I became aware of the fact that forms of expression is still quite restricted.

Hatori: You say that in your short visit, you weren't aware of these difficulties. So what exactly made you decide to go back for a year?

Muneshige: First of all, Vietnamese theater itself has not been introduced in Japan. Up until now, at Black Tent Theatre, I have been involved in "Asian theater" and as part of that, I had been to the Philippines, Thailand, India, and Indonesia and I had interacted with people in theater in those countries. But for some reason, Vietnam had been left out of the equation. What literally motivated me to visit Vietnam was the invitation project the Japan Foundation hosted in 2014 for people involved in theater arts in Vietnam.*1 It was through that project that I met a dozen or so people who had come from the Youth Theatre of Vietnam and I was quickly drawn to the country. That was a big reason. Based on that experience, I decided to figure out ways to visit and stay there for a longer period.

*1 The Japan Foundation has conducted a human resource development project over five years from 2013 to 2017 for people involved in Vietnamese theater. In 2014, the Japan Foundation invited fifteen actors and stage technicians from the Youth Theatre of Vietnam to Japan over a course of four months where they interacted with counterparts in Japanese theater and trained at local theaters. One of the results of this project was the performance of Without Signal! directed by Shuji Onodera (Head, Company Derashinera) and held at the KAAT Kanagawa Arts Theater in September 2017.

Hatori: How exactly did you meet those people from Vietnam through the invitation project?

Muneshige: It happened around the time when Black Tent Theatre was preparing a performance, so I invited them to Black Tent Theatre's rehearsals and showed them what our theater productions were like. Around the same time, Kei Takei, our dancer, and I were working on Asia of SAIYUKI, and were rehearsing for that too, so I invited them to that as well.
Once that broke the ice, they began coming every day; there were a dozen or so of them, watching and listening to the rehearsal quietly and attentively. I was intrigued so followed them back to Vietnam and stayed in Hanoi for a week. I had been interested in Vietnam since the 1970s, but I just didn't have a good reason or occasion to work my way in. So it was by chance, really; I just happened to have the chance to meet them.

Muneshige: When I joined Black Tent Theatre in 1978, it was just starting its activities under the theme of "Asian theater." The '70s was a turbulent decade in Asia: the Vietnam War ended in 1975 and in 1978 they [the Vietnamese] invaded Cambodia. In Thailand, the military coup d'état and the 1976 massacre—also known as "Bloody Wednesday" in Japan—took place. The Philippines was also in turmoil under President Marcos' dictatorship. So it was a time when theater was really needed.

Hatori: What do you mean by that; that theater was "really needed"?

Muneshige: On that point, let me tell you what I learned from my interaction with the Philippine Educational Theater Association (PETA).*2 Our exchange with PETA already began in 1978, but we never got around to actually co-producing something. We were interested in each other's countries and groups, and held lots of meetings where we'd always debate about theater; what theater is, whether it is necessary, and so on. That kind of interaction continued for twenty years.

Even now, as I work, there is one question that I constantly ask myself: is theater really necessary? And what I learned from PETA is interacting with people through the medium of theater; I'm convinced that that is an effective method or use of theater.
There are some people who say that we can live without theater, and therefore it's not necessary. But I can't just say it's unnecessary; I have to figure out the essence of theater, its necessity, especially since I chose theater as my life's work.

*2 The Philippine Educational Theater Association (PETA) was established in 1967 as a non-profit theater troupe. In addition to performing original plays on social issues, PETA also organize activities where they work with the local communities and support the local people by addressing problems they are facing. PETA also instruct them on how to express those problems through singing and acting. PETA was the recipient of the 2005 Japan Foundation Special Prize for Arts & Culture Award and the 2017 Ramon Magsaysay Award which is referred to as "Asia's Nobel Prize." PETA Official Website.

Next Page
Vietnamese Theater: Interpretations of the Producer-Director