Philip Cheah is the founder of the pop culture magazine BigO, and is also known as a collector and editor. He is also active as a film critic and film programmer for film festivals and spaces for film-screenings in the Asian region. Cheah was one of the juries of The Spirit of Asia Award by the Japan Foundation Asia Center for the 2016 Tokyo International Film Festival.
On this occasion, among his wide experience in the world of film, we spoke to him about his role as a film programmer. 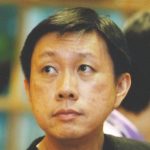 Career as a programmer, with experiences in different fields

Masamichi Matsumoto (hereinafter Matsumoto): How did you get into film programming?

Philip Cheah (hereinafter Cheah): In the 1980s, the only film programming done was by the Singapore Film Society. I was working as a film critic for about six years for newspapers and when the Singapore International Film Festival [SIFF] began in 1987, they asked me to join them because after reading my film reviews for about six years, they thought that they knew my taste. Boy, were they wrong! And also, I suppose I got the job in SIFF because they figured that since I was in the [mass] media industry, I could help the festival get press coverage. Well, that's largely true, because being from that field, I could always think of how to sell the film festival program itself and from what angles to sell the films.
So I learned programming on the job. I was already a film buff and I was already writing on films, but everything else I learned from going to international film festivals in foreign countries, meeting people. I just learned through trial-and-error. I made a lot of mistakes too. One of the first lessons I learned was, never screen films that were provided to you. You really have to travel to the country of the film's origin and see things for yourself and get a sense of the culture of the place, because a lot of films actually are rooted in cultures. And I find that in film programming, a lot of the people who are making judgments are quite clueless about where the films are situated in and how they grew from specific cultures. I think film programmers have to be attentive to that.

Matsumoto: How did SIFF begin?

Cheah: The founder of the festival was an Australian architect, Geoffrey Malone. He was a part of the Australian New Wave. He used to design sets for Phillip Noyce and was the lead-actor in Peter Weir's first student film.
When he came to Singapore, he could see similarities between Australia and Singapore: both countries had a film history where their production was interrupted. About fifteen years in Singapore, there was no filmmaking and he could see that, actually, it was the same as what he had experienced in Australia.
You have to just start something and, when people see and get involved, they will be inspired to do other things. That's how the Australian New Wave began, because when this group of people first saw Wake in Fright, they thought, "Oh, I can make that kind of film." So in Singapore, he figured that if you simply start a festival, people will be encouraged to get involved in it, in the space in which to share cinema.

Matsumoto: What is important for you in programming [films]?

Cheah: One of the first things which I learned at the festival. The inaugural SIFF was actually programmed with the help of the Mill Valley International Film Festival in the United States: SIFF started with the help of the Americans. In the second year, I told Geoff, "We are an Asian film festival. So what is it that makes us Asian?" And I said, "We have to find our Asian voice. You cannot just keep having this Hollywood programming in the festival because it doesn't make sense. There are so few festivals in Asia at this time, so we should represent where we come from."
The good thing with him was that he left me alone. So anything that came to my head, I just went and did it and that's how I started pushing for an Asian program. And then the main thing that I pushed for in, I think, the third year was the notion that since Singapore is within Southeast Asia, we should celebrate the cinema of Southeast Asia. From then on, we would annually feature a historical Southeast Asian filmmaker as a retrospective and it's continued since.

Programming comes from my own studies, because I didn't [actually] study filming. I studied Social Welfare. One of the key principles in Social Welfare is the disciple of listening. They train you to listen. I've said in a lot of programming committees over the years that I find that people don't listen much. They are always telling you what they think and what you should think. However, in film criticism, to me, the main thing is how you listen to the people who are speaking—the voices that you hear from all these films coming at you from all these countries? I think the act of listening is a lost art.

Matsumoto: It's very interesting what you say about listening. When Koreeda Hirokazu was teaching in our film school said, "The most important thing about documentary is to listen to people talking, to people's voices."

Cheah: Yes. And I hope I haven't lost that skill.