The Limitation of Filmic Expressions in Indonesia

Yui: During the symposium with four Indonesian female cineastes, Nia Dinata, Mouly Surya, Kamila Andini, and Meiske Taurisia (Symposium with Women Filmmakers: Visions for the Future of Indonesian Cinema; October 26th, 2016), they discussed the social issues surrounding Indonesian film. Since restrictions within the Islamic faith is getting stricter now compared to the Reformasi period, they say that they sense the dangers of dealing with sexuality and roles of woman in their films. Do you think that Islamic influences restrict filmic expression in Indonesian society today?

Teddy: Yes, I think that is the condition in Indonesia right now; there are more restrictions on religious values. I don't think it is moving the right way, but nevertheless that is the current condition and I can understand their concerns too. But I don't want to limit myself as a filmmaker and creator so I do try to not get it into my head; I try not to let those rules narrow down my filmmaking. If you worry about it too much, it will consume you from the inside. So, although I have similar concerns as other filmmakers, I don't confront them head-on but instead blend them into my films.

Yui: Regardless, you and your films may still continue to be the subject of protest by the fundamentalists.

Teddy: Of course, that's why I choose not to release my films in my country. Actually, that is not the only reason. If I do release Something in the Way in Indonesia, I am sure many scenes will be edited out due to censorship and then the film will not make sense. That's another reason why I don't release films in Indonesia.

Yui: How about Lovely Man?

Teddy: Lovely Man became a very sensitive issue. Actually, the first time we submitted the film to the Lembaga Sensor Film [Film Censorship Board], none of it was censored, but when we were about to release it, they asked for a resubmission and then they edited out a few of the violent scenes because it was apparently too "real." The rape scene was also omitted.

Yui: Do you think that censorship has become stricter than ten years ago?

Teddy: Censorship itself has not necessarily gotten strict; it depends on who is in charge at the Censorship Board. For instance, Lovely Man was released in Indonesia about the same time as a very well-known action film, The Raid (2011). It was a really violent film but it passed the Censorship Board without any problems, while Lovely Man—although it showed scenes with very mild violence—was determined problematic. So again, it depends on who is sitting on the board and who makes the decision at the time of submission.

Yui: Now in Indonesia, Warkop*2 (Warkop DKI Reborn: Jangkrik Boss Part 1; 2016) is a big hit. Do you feel a large gap between the audience's taste and your films?

*2 A cop comedy film series starring comedian-trio Warkop DKI that made a nationwide hit from the 1970s to '90s. In 2016, its revival, Warkop DKI Reborn: Jangkrik Boss Part 1 directed by Anggy Umbara, was released and made the record hit with an attendance of six million people.

Teddy: I think it's good that Warkop has so many audiences. I am glad that they made a lot of money because, at the end of the day, films and filmmaking are a business. We need to earn a profit to continue making films.

Yui: But aren't you disappointed with the audience? This film is essentially slapstick comedy.

Teddy: I am very conscious of the trends of films that are in the theaters now, but it is really hard for me to judge them. An extraordinary film doesn't mean that it makes money, and a terrible film might become a blockbuster. That kind of situation does bother me. But, again, I must say that filmmaking is a business: behind the director, there are four or five people who are trying to find funding for the film. So I am always supportive of those blockbuster films because, in the long run, it supports the film industry as well. 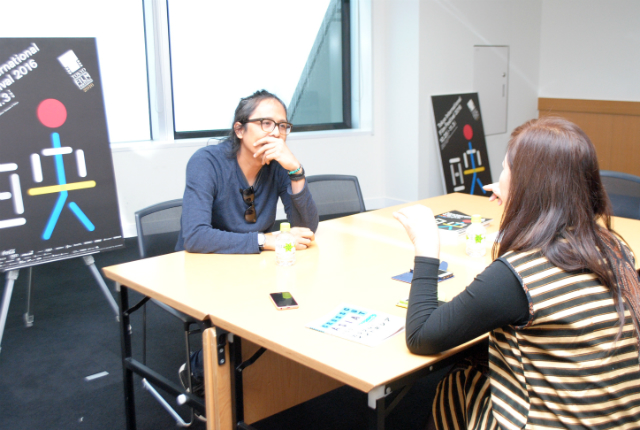 Yui: I see many independent, short films which are very experimental and high quality, but I rarely see feature films that are experimental. Is that because it is difficult to raise funding for feature films?

Teddy: Well, I have been working in the Indonesian film industry for twenty years but I still find it very hard to raise money for my films. I am fortunate to have been able to complete this trilogy, but since I was not able to receive funding or sponsorship I paid for it myself. It is very hard for me to raise funds.

Yui: Then how do you finance them?

Teddy: For this trilogy, I first had to shoot a lot of TV commercials; I usually work in the TV commercial industry. I can't make a living out of my films yet, so making TV commercials allows me save up for them. It also puts food on the table for my wife and three kids. I have to work a lot.

Yui: I didn't know you had three children! You also used to work for Coca-Cola?

Teddy: Yes, after I came back from London, I worked in the HR department of Coca‑Cola. I had to work but I also wanted to make films, and I knew I needed to make money to work in film so I chose that route. I decided to work on TV commercials to make a living, but I try to make one film a year to maintain my reputation as a filmmaker in Indonesia.

Yui: So you save up with your work from the TV commercials and channel the funding for your films. I think that is a really nice balance.

Teddy: Yes, it is a good balance for me because I get to practice my artistic styles in the commercials and then can experiment on them in my feature films. I think I have found a formula that works for me. If you want to make something like Warkop, the story would be different: you can make money very easily. But I obviously don't want to make Warkop.

Yui: I understand you used to make several films as a hired director but you don't do that anymore?

Teddy: I started my career as a director-for-hire for a few production companies. But for this trilogy, I did not want to answer to the producer's wishes. I wanted to make it myself. But for my next film (filmed in January 2017), I am working with Edwin (Someone's Wife in the Boat of Someone's Husband) and Meiske Taurisia as the producers. They offered me to direct this film.

Yui: What kind of film it is? Is it an entertainment movie, an art film, or a little bit of both?

Teddy: We are making a drama about the teenage years. It is a Teddy Soeriaatmadja film so it is in between entertainment and art. This film is going to be released in Indonesia, actually. I think one of the reasons they wanted me on board for this film is probably because, while it is a commercial film, therefore to some degree entertainment, they wanted some art film sensibilities in it. I like the producers, they are my friends, and I also liked the story. That's why I agreed to participate as the director.

Next Page
Learning from the Great Masters of Film