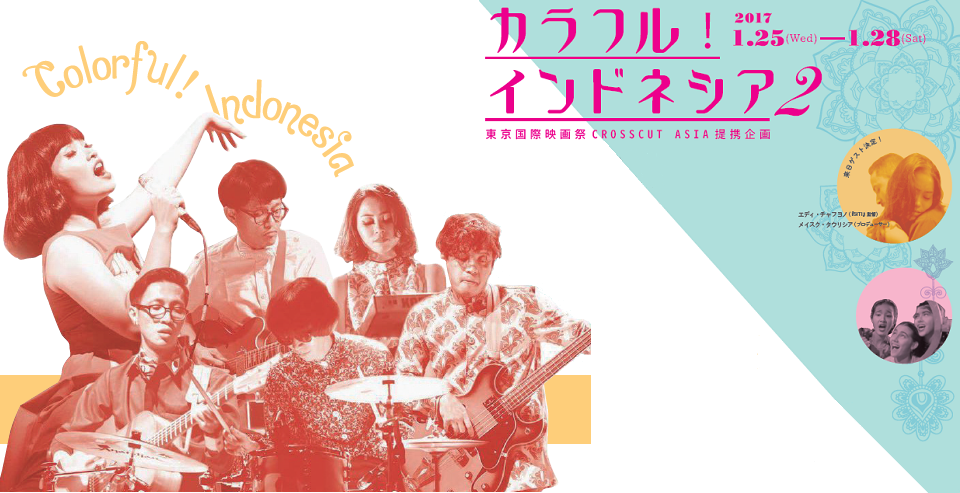 "Colorful Indonesia 2" will introduce attractive Indonesian films which are uniquely handpicked with an Indonesian point of view. Selections of the films are quite different from the time of the first event at TIFF. The line-up includes the omnibus film 9808 Anthology of 10th Year Indonesia Reform (2008) by young directors and artists like Edwin looking back on the dynamic changes in 1998, the pop music documentary of the Indonesian neo-acoustic band White Shoes & The Couples Company gaining reputation at home and overseas, Kamila Andini's newest short film Memoria (2016) set in Timor-Leste. Free booklets specially made for this event will be distributed to the participants in "Colorful Indonesia 2".

On January 28, there will also be a symposium with the Indonesian filmmaker Eddie Cahyono, who directed SITI, and producer Meiske Taurisia who was involved in arranging these screenings. With film critic Chris Fujiwara as the moderator and Asako Fujioka (Yamagata International Documentary Film Festival) as the interpreter, the symposium focuses on 'now' of contemporary Indonesian cinema which has many talented young filmmakers.

The Lineup of Screening films

The original version of Nia Dinata's Three Sassy Sisters (2016) screened at "Colorful Indonesia" in TIFF. Usmar Ismail, known as the father of Indonesian cinema, made this musical film with inspiration from Hollywood movies.

A group of different film makers, musicians and other artists united for making an omnibus of short films set during the May 1998 incident to commemorate 10 years after reformation (1998 - 2008).

This is a psycho-horror film by Joko Anwar who has an established reputation of suspenseful films. The screenplay is an adaptation of a best-selling novel written by Sekar Ayu Asmara.
Print courtesy of the Fukuoka City Public Library

This film describes a submissive wife Siti and her husband who absolutely refuses her submission. It was screened and won several awards at film festivals including the Singapore International Film Festival.
In cooperation with Zushi Beach Film Festival

A documentary film of a pop group's live act in Cikini. The group was formed in 2002 in Jakarta and their music is highly-praised at home and overseas. One of their albums was released from a Japanese indie label.

Remarkable selections including the newest work by Kamila Andini.

Screened at many film festivals including Cannes

Screened in the Orizzonti Sectionat Venice

An ambitious work about women's freedom in Timor-Leste.

Born in Jogjakarta, Indonesia, Eddie Cahyono was one of the founding members of Fourcolours Films. His short film Between Past and Present won various awards. His debut feature film is Let's Dance! (2010). His second feature film SITI (2014) was screened at international film festivals in Singapore and other countries.

Meiske Taurisia produced Edwin's Blind Pig Who Wants to Fly (2008), Postcards from the Zoo (2013), Kamila Andini's Following Diana (2015) and other films. She opened Kinosaurus, a "micro-cinema" in Jakarta in 2015, and organizes various screening events through her distribution platform, Kolektif.