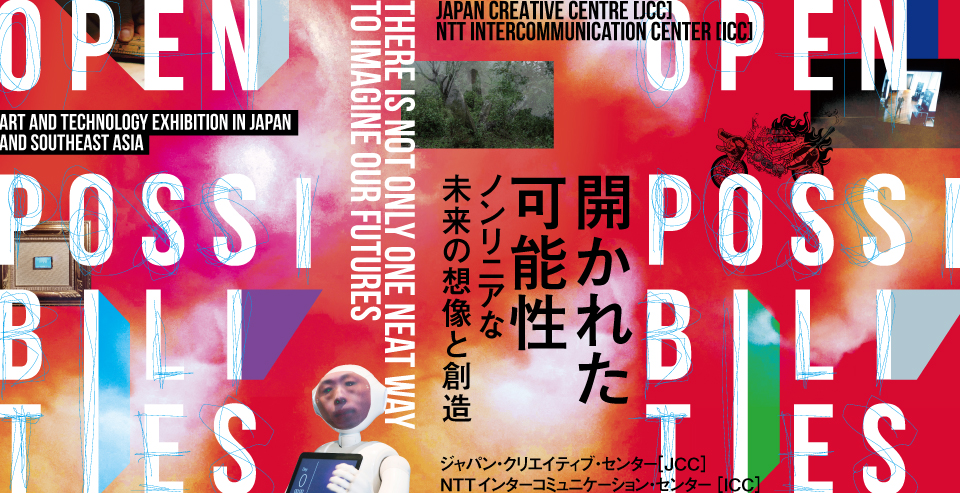 [YouTube Upload]
Open Possibilities: There is not only one neat way to imagine our futures

Art and technology exhibition in Japan and Southeast Asia

Shining a spotlight on the creative scene in Asia that is rapidly developing as the region makes advances in information technology, the Japan Foundation Asia Center fosters exchange programs and partnerships between members of the emerging generation of talent through exhibitions, workshops, symposia, and performances in order to introduce new media art that is the fusion of technology and artistic expression as well as trends in pop culture and music in the post-Internet era. Exhibitions have to date been held in Manila, Tokyo, and Yogyakarta, aiming to promote exchange between young peers from specialist fields in Japan and Southeast Asia and to showcase creativity through art and technology.

For the 2019 fiscal year, which is the last year of the project, the Japan Foundation Asia Center will further expand its network of projects cultivated until now and hold an exhibition in Singapore and Japan, jointly curated by curators in Southeast Asia and co-organized with the NTT InterCommunication Center [ICC], a leading institution in Japan for new media art. In December 2019, an exhibition will take place at the Japan Creative Centre (JCC) in Singapore to mark its tenth anniversary, which will then tour to the Tokyo venue at the ICC from January to March 2020. Harnessing the practice-based activities and distinct characteristics of new media art in Japan and Southeast Asia, the exhibition aspires to widely present contemporary forms of expression in Asia across national and regional borders.

Exhibition Outline
As information technology and globalization continue to transform our society, what kind of vision of the future can we imagine?

This exhibition is an attempt to reinterpret the singular image of the future that has been cultivated by modernization, scientific and technological progress, and instead present multiple possibilities for our future. With a focus on new media art in Asia, the featured artists use technology as shared tools or platforms to explore mythology, ritual, and the relationship between mankind and machine. Within Asia, the forms and processes by which modern technology was accepted differ greatly. These artistic practices reveal remarkable creativity and rich sensibilities.

Through different perspectives of artists on technology, this exhibition endeavors to broaden our vision of a linear future into futures with open possibilities.

Exhibition "Open Possibilities: There is not only one neat way to imagine our futures" (Japan)

During the exhibition, Japan Creative Centre will host guided tours and talks featuring the curators and participating artists. In addition, outreach programs will be organized at two other venues: a workshop at Science Centre Singapore for making your own new media art and a workshop for building a musical instrument at The Substation. In conjunction with the main exhibition, these events offer participants the chance a hands-on experience with the unique creative possibilities of art and technology.

[Registration] Please register through the event page on JCC's website. Please take note of the venue of each event, and flash the registration screen at reception of each venue. Seats are limited.

In this talk, the artists will talk about their work and how they challenge the limits of contemporary technology. This talk and discussion explores the possibility of reimagining technology through artistic practice. How can media art foster an alternative concept of the future?

This workshop invites participants to build a drawing machine using appliances and electronic toys. Without the help of electronic kits, hardware hacking, or programming that require specialist knowledge, participants instead harness the existing operations of electrical appliances and connect these together through simple means to convert everyday devices into drawing machines.

In this workshop, participants learn and explore the possibilities of kentongan in the digital age. A kind of the slit drum, this instruments has functioned in Southeast Asia as an ancient alarm. Using Arduino and solenoid, participants build their own kentongan drums. At the end of the workshop, the instruments built by the participants will be played and recorded in the venue.

Artist Talk "On Surroundings: Reconfiguring the modes of communication with nature"

Through presentations and discussion, this talk investigates the relationships between art, technology, and nature. How does art and technology shape our understanding of nature? If we can reconfigure our modes of communication with nature, will an alternative vision of the future emerge?

Riar Rizaldi is an artist from Indonesia currently based in Hong Kong. His works mainly focus on the relationship between human and technology, consumer electronics, theory-fiction, image circulation and network intervention. Through his works, he questions the notion of (a) temporality, image politics, digital materiality, media archeology and unanticipated consequences of technologies in human life. He is also actively composing and performing sonic-fiction using the methods of field recording and foley through programming language. Riar has also curated ARKIPEL Jakarta International Documentary & Experimental Film Festival - Penal Colony (2017) and "Internet of (No)Things" (2018) at Jogja National Museum that was organized by Japan Foundation Asia Center. Riar is currently a PhD candidate at School of Creative Media, City University of Hong Kong.
http://rizaldiriar.com

Born in 1978, Yasuko Yubisui studied architecture at Waseda University and then worked initially in production management for art events. In 2005, she started working at NTT InterCommunication Center [ICC] as a curatorial assistant. From 2006 to 2008, she also took on a parallel role as coordinator of ICC's video archive HIVE. In recent years, she has been involved in curating and producing many exhibitions held at ICC, including the "Open Space" series. In 2016, she was one of the editors and contributors to OS10: A Perspective of Art and Media Technology: Documents of ICC OPEN SPACE 2006–2015 (https://www.ntticc.or.jp/en/feature/os10/), which was published to commemorate ten years of the "Open Space" series.

A graduate of the Department of Moving Images and Performing Arts, Tama Art University, Rei Hayama spent her childhood in a unique environment with frequent interaction with wildlife. She began her film and video practice using original approaches from 2008. In her work, she explores the nature and other living creatures absent from or disregarded by anthropocentric perspectives. Reinterpreting the relationship between nature and mankind, she attempts to summon nature’s invisible layers of reality into the human imagination. Her work has been exhibited and screened at the Tokyo Metropolitan Museum of Photography, Museum of the Moving Image (New York), Bergen Kunsthall, Thai Film Archives, Anthology Film Archives (New York), Sheffield International Documentary Festival, Empty Gallery (Hong Kong), and more.
http://reihayama.net/

Born in 1988, Etsuko Ichihara is a media artist and fantasy inventor. She graduated from the Studies of Media, Body and Image program at Waseda University’s School of Culture, Media and Society. In her practice, she creates artworks that offer a unique interpretation of Japanese culture, customs, and beliefs, presenting new, technology-based approaches. Her accessible and fun work going beyond the conventional contexts of visual art and applying highly original design approaches to Japanese culture has attracted widespread international press and media attention. Her major work includes Sekuhara Interface (2012), an interactive installation featuring a radish that responds with sexual moans when touched, and the Digital Shamen Project (2015 and ongoing), in which a household robot offers a chance for the bereaved to live with a deceased relative for 49 days. She won the Excellence Award at the 20th Japan Media Arts Festival in the Entertainment Division in 2017, an Honorary Mention (Interactive Art + category) at Prix Ars Electronica 2018, and a STARTS Prize nomination also in 2018.
http://etsuko-ichihara.com/

Initiated in 2016 by Urich Lau and Teow Yue Han, INTER-MISSION is an art collective dedicated to discourses of technology in art. With a focus on interdisciplinary and collaborative video art, audiovisual, performance, installation, and interactive art, the collective aims to inhabit the gap between technologically engaged artworks, artists, and audiences. INTER-MISSION builds transnational networks to promote sustained dialogue and engagement with media practices. It creates a space that encourages collaboration, reflection, and participation in our ever-changing technological environment through interactive performances, installations, video screenings, international and interdisciplinary dialogues, and knowledge sharing.
https://www.inter-mission.art

Waft Lab is a Surabaya-based interdisciplinary initiative whose art, culture, science, and technology practices are driven by a DIY spirit. Since 2011, Waft Lab has been organizing various activities such as workshops, discussions, exhibitions, and festivals with the aim of discovering fresh ideas and building sustainable collective networks. Waft Lab previously had four main regular programs: Elektro Work for electronic music performances; Video Work for video festivals; Urban Work for art exhibition events; and No Work for workshops or sharing and discussion activities. More recently, Waft Lab has focused on its No Work projects, continuing to develop and seek new methods that can meet the needs of the public.
http://www.waft-lab.com

Born in 1984, yang02 completed a master’s degree majoring in media art at Tama Art University in 2009. His work is inspired by the potential for expression in the public sphere with a foundation in digital media. His practice inquiries into the independence of expression and reveals human physicality by entrusting the agency of actions to autonomous devices or external factors. His recent group exhibitions include the 20th DOMANI: “The Art of Tomorrow” (The National Art Center, Tokyo, 2018) and “The Breathing of Maps” (Yamaguchi Center for Arts and Media [YCAM], 2018). He won the Excellence Award in the Art Division at the 21st Japan Media Arts Festival (2018).
http://yang02.com/

Lintang Radittya is an instrument builder and sound/electronic artist based in Yogyakarta, Indonesia, whose current interests include DIY analog electronics, the relationship between sound and space, randomness, Javanese futurism, and the intersections of electroacoustic, interactive, and experimental music. He has taught workshops, held exhibitions, performed live, lectured, and created unique instruments and installations at many locations and festivals around the world, including CTM Festival (Berlin, 2019), Nusasonic (Yogyakarta, 2018), SynthFest (Malaysia, 2017), and the Holland Festival at STEIM (Amsterdam, 2017). Lintang also founded Kenali Rangkai Pakai, a project focused on the research and development of DIY synthesizers in Indonesia, and initiated Synthesia.id, which attempts to document and database synthesizer culture (both building and development) in Indonesia.
http://www.kenalirangkaipakai.blogspot.com
www.synthesia-ind.blogspot.com

Born in the UK in 1984 and based in Singapore, Zai Tang’s solo currently responds to the question: What does it mean to listen to the voices of nature in a time of ecological crisis? He experiments with the abstraction and visualization of sounds recorded in wildlife-rich habitats under threat. He combines these augmented sounds with other elements—drawing, animation, projection and/or performance—to create immersive and reflexive experiences that explore notions of awareness and connectivity between the human and the nonhuman. His recent exhibitions and screenings include at the Singapore Biennale (2019), SGIFF (2019), the Second Yinchuan Biennale (2018), KLEX (Malaysia, 2018), Singapore International Festival of the Arts (2017), and the National Gallery Singapore (2017).
http://www.zaitang.com