Something is rumbling in Myanmar's film industry. Film director Kyi Phyu Shin has not only been making films for the past twenty years, but is also involved in politics as member of the central committee for Aung San Suu Kyi's National League for Democracy (NLD). In this interview, she shared her thoughts on today's Myanmar on the road to democratization, as the film business comes to a juncture and the legal system, including a new film law, is being overhauled. Some of the topics include; the widespread use of digital equipment, the popularity of comedy movies, the incoming forces of television in the film industry, how to draft a new film law, how to mediate between art and politics, and the gradual changes occurring in film production and international co-production. We spoke to her during a recent visit to Japan. 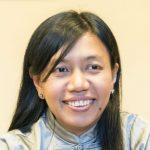 Born in 1975, Kyi Phyu Shin has directed many films and video-films. Films such as HNOU KHANHTET KA DAH THWA [The Blade on Lips] have been acclaimed at the Myanmar Academy Awards, winning Best Actor, Best Actress, and Best Script. Her films have a wide following, particularly among the youth. She has participated in the Yangon Film School's documentary programs. Her 2006 film A Sketch of Wathone, commemorating a famous Myanmar comic artist, won Best Short Film at the 2008 All Roads Film Festival organized by the National Geographic Society. She lives and works in Yangon, Myanmar.

A Variety of Film Genres

Asako Fujioka (hereinafter Fujioka): When I recently visited Yangon as a Japan Foundation Asia Center Fellow, I was surprised to find a lot of entertainment films being made and released in the cinemas. You yourself have made very many films of a wide variety―seven feature films and over forty video-films. What would you say makes you stand out as a film director from the others?

Kyi Phyu Shin (hereinafter Kyi): Whatever film I make, I make sure the picture is beautiful. Whether it is a romance, a comedy, or a serious drama, my audiences recognize that the images of my films are aesthetically refined. That's what I hear from the audience.

Fujioka: It sounds like you've been making a lot of films for younger people.

Kyi: I do often target young audiences. I've only made two films for older viewers.

Fujioka: Which is your favorite?

Kyi: Foggy Dream on Rainy Night (2009). The story takes place right after the war, and it's a love story. The protagonist has three distinguishing features: one, he has lost his memory and has no past; two, he is a student; and three, he is an artist. The music score to this film is very nice, too, and so this is the favorite of my films.
If I were to make this film today, it would not be easy. It's too difficult and time consuming to build a film set of those historical times. In Myanmar, we usually don't design sets but use buildings that are already available. The houses we filmed for this film have all been converted to restaurants nowadays and the owners wouldn't agree that they be used for filming.

Kyi: Although artistically it was considered a success, commercially, I'm afraid, it was a failure. Audiences who like these kinds of films are very rare in Myanmar. Most local movie fans prefer comedy or teenage love romance.
Among the seven films I directed, it is the only one that didn't make a profit. Nevertheless, among film professionals it was acclaimed as a monumental film. The leading actor and supporting actress were lauded at the Myanmar Academy Awards and my name became widely known after this film. Whether a film is commercially successful or not does not impact my own income, because in our country the director's fee is fixed. But the problem is that there are only movie houses in bigger cities like Yangon and Mandalay, and so the box office of a theatrical film is very limited.

Fujioka: I see. I heard over one hundred films were made per year in Myanmar during the 1970s. Today, you could guess there are more people watching movies released on VCD or DVD (video-films) than in the cinemas. You make films for both types of releases, video and cinema. Tell us what the difference is.

Kyi: Movie films are made with more shooting days than video-films. Therefore, I can be more attentive to the camera angles, camera work, and lighting. I also wish to be particular with the script, and so I choose the novel on which to base the script very carefully. Only films released in the cinemas are eligible for the Myanmar Academy Awards. Meanwhile, video-films are made for entertainment, so I try my best to make them easy to watch.

Fujioka: How is the film business doing recently?

Kyi: Ticket sales rose sharply in 2016. But unfortunately, most of the films were comedy. It's because filming became easier and faster after the equipment shifted from celluloid to digital. Nowadays, there are more productions for the cinema than for video release.
Audiences in Myanmar go to the movies to be with their friends and to be entertained; especially young people who go to the movies in groups, they prefer comedy. That's why serious dramas and love romances don't do well commercially. In other words, despite the rise in production, the quality of filmmaking is dropping. There are only a few good films. More people seem to be interested only in churning out easy, popular films and making money.

Kyi: The video-film market is also in very bad shape. Rental-video vendors buy three DVDs from producers, copy them illegally, and put out ten copies on their shelves. Without strict piracy control, the video-film producers are unable to make profit. That's why I think the long-term outlook is not optimistic, despite the increase in the number of film productions. Producers stick to comedy, claiming that that is what audiences are asking for, but I predict that the same audiences will move away if that's all they can get. This will take us back to the era when audiences turned their backs to the movie houses.

The New Form of Television: The Entrance of the TV-film

Kyi: The recent news is that authorities will approve five new television channels at the end of this month or by next month (February to March 2017). This will bring television programming to a wider viewership. The channels plan to broadcast, for free, drama series, two-hour dramas, films, and other entertainment programs. Presumably with a large viewership and income from advertising, the five channels will have ample funding. There's high expectation that feature-film production for television will be part of their programming.
The concern is that current producers of video-films and cinematic films will be pressured. It's possible that film directors like us will either become somewhat like hired hands under the control of the five channels, or totally dependent on them. Immediately after my return from Japan, I will need to go to speak with them.

Fujioka: Do you consider the launch of TV-films to offer opportunities for your filmmaking to become freer or higher quality than before?

Kyi: As a film director, I do think the situation poses a good chance. But for current producers who continue to make films out of love, it will be quite a setback; because they will need to compete with affluent television people entering film.

Fujioka: In the early days of television in Japan, too, film professionals were hired en masse. They soon discovered television to be the best place to experiment new things and they produced exciting work. History often speaks about the golden era of cinema being destroyed by television, but in fact the dawn of new media, like television or the Internet, has always been a creative arena for experimentation that was free from budgetary concerns. To me, the situation today in Myanmar looks promising.

Next Page
Filmmaking and Politics: Myanmar Film Industry since the National League for Democracy Government

News
CROSSCUT ASIA #04 to showcase Next Generation of ASEAN's Filmmakers