At the fourth edition of CROSSCUT ASIA, a showcase series of Asian films in collaboration with the Tokyo International Film festival (TIFF), we featured the masterpieces by significant young filmmakers of Southeast Asia that were recommended by renowned figures of films of same region. Kirsten Tan's first feature film Pop Aye, a Singapore-Thailand co-produced film, was selected by Singapore's master Eric Khoo (Tatsumi) for this showcase. During TIFF, Kirsten Tan talked to university students about her career as a film director and shared the behind-the-scenes of the film with leading actor Taneth Warakulnukroh.

[Edited from the lecture on October 30, 2017 at Gakushuin Women's College (Department of Intercultural Communication)] 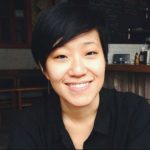 Kirsten Tan's works have been screened at film festivals in Singapore, Rotterdam, Toronto, and Busan. Spotlighted by CNN's "Ones to Watch", she has received numerous international awards, including Best Southeast Asian Short Film for Dahdi (2014), and Singapore Short Film for Best Director in Fonzi (2007) at the Singapore International Film Festival. Her first feature film Pop Aye (2017) has been well received at Sundance and numerous film festivals. 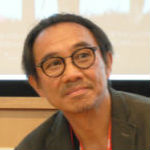 While his career bloomed as a singer from 1980s to '90s, Thaneth Warakulnukroh started his own music label "Music Bugs Company." After twenty years of recess, he restarted his work as a musician in recent years. He also performed as an actor in Bad Genius (2017) and Pop Aye.

Figuring Out One's Own Way to Become a Film Director

Tamaki Tsuchida (hereinafter Tsuchida): We are pleased to welcome Ms. Kirsten Tan, the director of Pop Aye which is now presented at the Tokyo International film festival (TIFF), as a guest for our lecture today. As an introduction, Kirsten, I would like to ask you about your current works. You have made some short films and also commercials such as Georgio Armani's in previous years. As a director, what do you think are the differences between making films and making commercials?

Kirsten Tan (hereinafter Tan): Just to give a bit of my background. I have always loved films; I loved the cinema since a very young age. And since I was sixteen, I knew that I wanted to be a filmmaker. My very first and only possible entry to filmmaking was by making short films at the start. So, I made quite a lot of short films, for about ten years, before I finally made my first feature film. But, in between, I realized that it is impossible to make a living as a filmmaker because not only do you not make any money, you often have to put in money to make those short films. Once I realized that the only skill and craft I have in life is actually to make films, very naturally I realized that I can survive and also continue my art by making commercials. That is why I started exploring the commercial route as well.
And, as well, my parents were against my dream to be a filmmaker but rather preferred that I find a normal job, like an accountant or a professor or an engineer. So it was crucial that I find a way to become financially independent. Therefore, it was very important for me to somehow be able to make a living. Otherwise, there was no way that I could practice my craft.

Tsuchida: Did you study filmmaking in Singapore before you made some short films?

Tan: Before I studied film—I actually always knew I wanted to study film, but in Singapore there wasn't a university film degree during that time. So I studied the closest thing which was literature. And this was actually good because stories are about human life and everything. So when I could finally enter a film school after graduation, I felt like I was already equipped with the ability to tell long stories. After university, I did a short diploma in filmmaking at a local polytechnic called Ngee Ann.

Tsuchida: You are currently based in New York but when did you move abroad?

Tan: I started filmmaking at twenty-three and did two short films in Singapore, and after that when I was twenty-five, I had a chance to go to Korea on an Artist-in-Residency program for film. I was quite happy in Korea because it was far away from my home and I had freedom to travel around and do things. So after finishing the program, I still didn't want to go back to Singapore and I went to live in Thailand for two years, but I still didn't want to go back, so I continued to study film in New York University. There I studied for about five years and have been in New York for nine years ever since.

Tsuchida: Speaking of Singaporean film directors, Eric Khoo and Anthony Chen are familiar to movie fans in Japan, but I think, in general, most students wouldn't have any idea about Singaporean films. So just to start off, could you tell us how many films are annually made in Singapore?

Tan: I think about ten to fifteen films are made per year. To give a context of Singapore, we are a very small country with only four million people and we are also a very young: only fifty years old. So in that context, I really feel like we are still trying to find our grounding in our culture and that is why, in many ways, we are very observant towards other people's cinemas and cultures whether it is Japanese, European, or American. In many ways, we are like a sponge because we are so new; we are just absorbing and learning as we go along.

Tsuchida: So then for young filmmaker like you or students who aim to become filmmakers, is it a natural choice to go overseas to find their way? Your Pop Aye was also made in collaboration between Singapore and Thailand, so could you elaborate on that.

Tan: I think the scary thing for young filmmakers in Singapore is that, in many ways, we don't have [many] role models. There is Eric Khoo and Jack Neo, but it is still not enough if we want to improve our skills, establish careers in film, and also develop the industry itself. When I look in front of me, there aren't many who are doing what I am doing, so a lot of times you are just figuring things out on your own, in your own way.
So at the time when I left Singapore, which was more than ten years ago, I found it was quite hard to learn film in my country because there was only a small industry, and at schools we could learn how to turn on and use the camera, but beyond that, in terms of the softer elements of storytelling, no one really taught us how to do it. This made me feel it was necessary to go to New York. So hopefully we could share all this knowledge that we gained from outside with the younger Singaporean filmmakers back home.
But it doesn't mean that all of us have to go overseas because actually some filmmakers have stayed in Singapore and have done very well. Nowadays, the world is becoming more globalized anyway with the Internet and easier access to the outside world. But I would say that Singapore is still a very, very young industry and the people practising film are very young. So we are really still trying to figure out our way.

Tsuchida: I understand that Singapore is multi-ethnical and multi-cultural, and, for many film directors and artists like you, nowadays it is easy to move around freely despite borders. Meanwhile, are you interested in searching for an identity of Singapore through your works? For instance, speaking from my understanding of Min Wong, a well-known artist in Japan for his installation works and films, I feel like he is always searching to construct some kind of memory or identity of Singapore which leads into his work. How about you?

Tan: That actually points to a broader issue in Singapore. It may not be that big of a problem, but the real issue a lot of Singaporean filmmakers and artists have is that we are all unsure of our identities, and this is a question I have often asked even to certain important government officials in Singapore when I had the chance to meet them. I asked, "What is the essential Singaporean identity other than food or Singlish which is a Singaporean-English?" But I am afraid to say that they couldn't answer it either. Then I realized that things like identity has to be formed organically and it is not up to me to search for because it is not there. Maybe we are just too young right now to have a proper, solid identity.

Maybe because we are a small country, I feel like there is a lot of insecurity about our identity. But for me, as a filmmaker, I am only interested in portraying a specific life either in Singapore or somewhere else, and if the identity is there, it will be there. So as long as I capture my characters' particularities with realism and sincerity, I feel like that will, in some ways, show through in the life I want to portray. Likewise, it may be slightly dishonest if I force something to be A, when it is, in fact, B. And generally in my films, I try not to think about nationality, although that is a tendency between people; to associate cinema with national cultures.

Next Page
Dahdi: A Short Film themed on the Rohingya Crisis