The Japan Foundation Asia Center and Tokyo International Film Festival (TIFF) today unveiled the official poster and trailer for "Asian Three-Fold Mirror 2018: Journey" the second of the omnibus film series co-produced by the two organizations. The poster and trailer designs were created to evoke the title, signifying “Journey,” traveling beyond time and space. We also announced today that Lim Giong, an internationally acclaimed composer, created scores of the film. He is known for his work on films directed by Hou Hsiao-hsien and Jia Zhangke.

The omnibus film represents work by three directors, Degena Yun (China), Daishi Matsunaga (Japan) and Edwin (Indonesia), and highlights the theme “Journey,” with three episodes that depict the lives of characters who travel in Japan, Myanmar and China. The project framework requires the directors to include a character that is connected in some manner to another Asian country, and to shoot on location in an Asian country. The rest is left to each director’s unique style, as they weave the project’s main theme into their work. 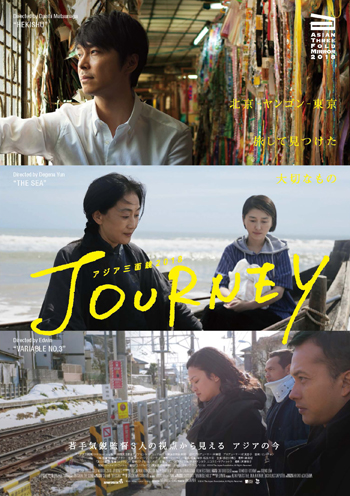 Asian Three-Fold Mirror 2018: Journey will have its world premiere on October 26 at the 31st edition of TIFF, to be held from October 25 to November 3, 2018, and will then be shown on the international film festival circuit.

Lim Giong is a musician, singer, songwriter, DJ and composer. During a nearly three-decade career, he has worked with artists in a variety of fields and participated in many international collaborations. He is currently focusing mainly on the creation of scores for films and documentaries.