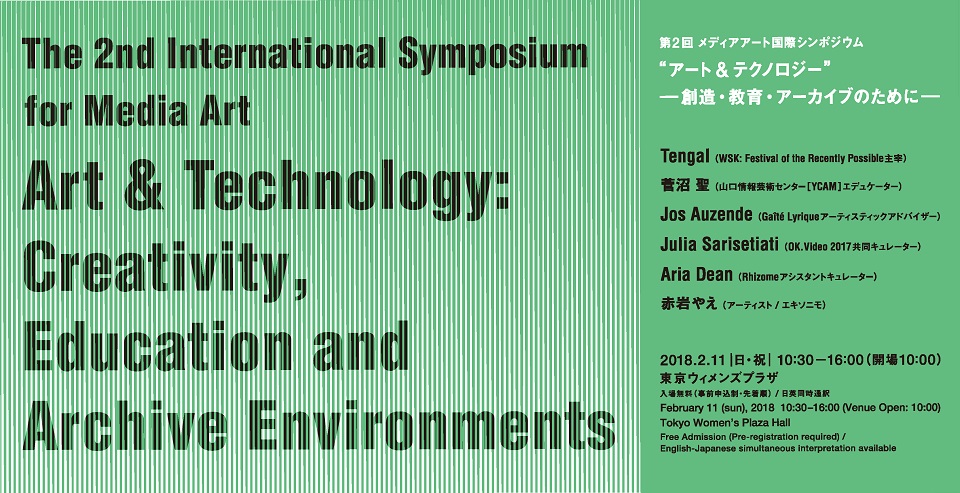 Following the first symposium in 2016, Arts Council Tokyo (Tokyo Metropolitan Foundation for History and Culture) and the Japan Foundation Asia Center will organize an international art and technology symposium to provide a forum for networking and disseminating the latest information in the fields of new media art and digital creativity.

In recent years, festivals and cultural institutions specializing in new media art have developed practical and accessible programs for people to experience creativity hands-on and learn about various forms of artistic expression that use media technology. From this we can see the emergence of new cultural and art platforms organically connecting digital media, the public, and society through transnational and transregional collaboration and collective creativity within the network society.
What values and challenges are made possible today by digital media creativity? This symposium explores how infrastructures for new media art function within society through a wide-ranging series of case studies from art centers and festivals around the world. It will also consider related issues of cultural heritage, preservation, and archiving for Internet art and other examples of practice that employ digital technology.
Bringing together leading practitioners in media art creativity, education, and archiving, the symposium is an opportunity to assess the future prospects for arts and culture that will grow out of crossovers between art and technology.

[Session1] Platforms for Creativity and Learning

Tengal is a composer, media artist, and cultural producer. He has been involved in research-based production bridging art, technology, and society. Since 2005, he has been producing various media art events and initiatives in Manila and the Southeast Asian region. He founded the art organization SABAW Media Art Kitchen in Manila as a curatorial platform specializing in digital and media art from Southeast Asia. In 2008, he initiated the Philippines' first international media art festival and symposium, WSK: Festival of the Recently Possible. In 2017, he curated the INTERSTICES: Manifolds of The In-betweenexhibition with the Japan Foundation Asia Center.

Born in 1982. After completing his degree at the Kyoto University of Art & Design, Kiyoshi Suganuma entered the Institute of Advanced Media Arts and Science [(IAMAS]). As well as conducting research into media facades, which incorporate video and interactivity into building exteriors, he has also worked at an architectural firm where he was involved in designing office interiors and exhibition sites. In 2009, he started his career at YCAM, where he has been organizing its entire education programs and planning research/development projects aimed at making practical use of regional resources, including planning workshops and facilitation and creating the Korogaru Koen Parkproject. He is interested in ways of initiating bottom-up communities.

Born in 1981, Julia Sarisetiati joined ruangrupa, the artist collective based in Jakarta, in 2000. She is currently running a community space called Gudang Sarinah Ekosistem as part of the management team. She has participated in the Singapore Biennale (2011) and Gwangju Biennale (2011) as an artist and photographer. In 2017, she became a curator for the media art festival OK.Video, where she exhibited works on the theme of pangan[food], which she has developed into laboratory-based research projects to demonstrate and explore economic and social sustainability.

After her graduation in architecture and urbanism, Jos Auzende took part in the launch and programming of Batofar, a one-of-a-kind venue dedicated to early electronic music in Paris. She joined the Gaîté Lyrique team as artistic advisor when the project was at its starting point of developing this multifaceted cultural center, dedicated to music and media art. With a profound interest for new, virgin territories, minor practices that deal with stories to tell-and-say, she crosses media and minds by setting frames for programming in a curatorial way that questions the expanding status of works and viewers in the digital age. Noting that media art is still difficult to access and that children are sometimes dismissed as an audience, she invented Capitaine futur, a forward-thinking, invisible guide that directly addresses children and narrative forms related to technological transformations which foster interaction and art as a growing process.

Yae Akaiwa started her artistic activities with the formation of artist unit exonemo with Kensuke Sembo in 1996. Blurring the boundaries between digital, analog, computer networks, and the living world, their experimental projects describe humorous and innovative explorations that reveal the relationship between technology and its users. In 2006 exonemo won the Golden Nica at Ars Electronica for their work, and in 2015 they participated in the first NEW INC museum-led incubator at the New Museum. In 2017, she became a fellow of the Program of Overseas Study for Upcoming Artists organized by the Japanese Agency for Cultural Affairs. She also launched the event "Internet Yami-Ichi," which has been held in roughly twenty cities around the world.

Aria Dean is an artist, writer, and curator based in Los Angeles, CA. She is assistant curator of net art and digital culture at Rhizome, an art organization based on the Internet and at the New Museum in New York City. Her writing has been featured in Artforum, Art in America, The New Inquiry, Real Life Magazine, Topical Cream Magazine, Mousse Magazine, CURA Magazine, and X-TRA Contemporary Art Quarterly. She has spoken at art institutions and colleges and universities around the US including the New Museum (New York City, NY), UCLA (Los Angeles, CA), Reed College (Portland, OR), The New School (New York City, NY), and the Canadian Center for Architecture (Montreal).