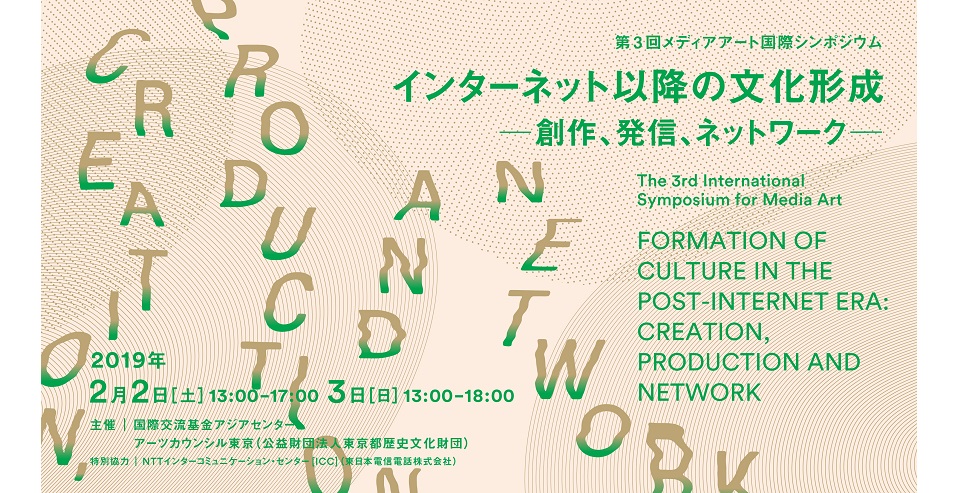 Creativity in the Age of Internet

Since the internet has become an everyday part of our lives, creative practices have prompted the formation of alternative scenes and joint creative processes through the fusing of varying expertise and fields by individuals connecting with each other through social media, namely among the next generation of artist who use media technology. Here we get a glimpse of cultural development through new ideas and creative methods that utilize digital technology and influences that transcend borders.

In this symposium, we examine these processes of forming culture through three sequential themes: creation, production, and network. How are creative practices changing in the present-day internet society, and what needs arise in the cultural environment that supports these practices? We will introduce artists who use the medium of internet in their work, as well as the work of directors and curators who help produce these new creative formats, and the work of editors who advance media development in Asia, to think about how culture will be shaped from now on.

* Panelist and program contents may be subject to change

Through looking at the radical practices of artists who use media technology such as Internet as a tool, or even as their site of creation itself, we will reveal the current state of creativity in the age of the Internet, and the diverse practices that cross over genres we see today.

We will introduce the practices of producers and media that engage in the shaping of culture through their new forms of production and approaches unique to the network society. Through this we will discuss the mutual influence of cultures since the Post-Internet era, and the future of youth culture in Asia that is born there.

Born in 1987. While still attending university, he began his activities that crossed over between music and art. He has founded Open Reel Ensemble and Braun Tube Jazz Band since 2009. Has been in charge of music for a total of eleven ISSEY MIYAKE Paris collection shows to date. In 2015, he launched "Electronicos Fantasticos!," a project dedicated to the revival of disused electric appliances in the form of musical instruments that are eventually to be played in concert at festivals involving a variety of other people, for which he was awarded the 68th New Face Award of Minister of Education Award for Fine Arts. In 2018 he won the Prix Ars Electronica and Starts Prize Honor Award.

Bangkok-based Eyedropper Fill, is a multimedia design company, specializing in moving-image production and installation. They use a transdisciplinary approach to experiment and cross-collaborate between skills and media such as moving image, interactive design, exhibition design, and installation art. Their aims are to transform information to experience that expands from screen to tangible reality and to immerse people in the moment. Along with their vision to push forward the realms of new media, they are also committed to educating, motivating and inspiring young people by sharing their experiences and processes in a number of workshops and talk in universities in Thailand.

Launching the online record label Maltine Records in 2005 when he was just 15 years old, tomad has 170 releases to his name. Maltine Records has gained attention as a leading symbol for the new dance-pop music scene and as the image of his generation in Tokyo. He has held events in Manila (Philippines), China, and New York. He has also produced songs for foreign artists. In 2015, he published Maltine Book (Switch publishing), which brings together the activities of the label, to commemorate the 10th anniversary of the label's founding.

Riar Rizaldi is an artist from Indonesia currently based in Hong Kong. His works mainly focus on the relationship between human and technology, consumer electronics, theory-fiction, image circulation and network intervention. Through his works, he questions the notion of (a) temporality, image politics, digital materiality, media archeology and unanticipated consequences of technologies in human life. He is also actively composing and performing sonic-fiction using the methods of field recording and foley through programming language. Riar has also curated ARKIPEL Jakarta International Documentary & Experimental Film Festival — Penal Colony (2017) and Internet of (No)Things (2018) at Jogja National Museum that was organized by Japan Foundation Asia Center. Riar is currently a PhD candidate at School of Creative Media, City University of Hong Kong.

Born in 1978. Obtained his Master's degree from the Interactive Telecommunications Program (ITP) at New York University. He was Artistic Director of STEIM in Amsterdam until 2012 where he organized several projects. As a performer he combines the turntable with original performance tools and works in the fields of experimental music, improvisations, and digital music. He was the Visiting Assistant Professor at the School of Creative Media at City University of Hong Kong until 2017. He is currently based in Tokyo, Japan.

Joined an editing company after graduating from university. In 2013 he established TOmagazine, a culture guide for the 23 wards in Tokyo that introduced hyper local sites. He was the editor in chief until the 6th issue. In 2015 he became a freelance editor, working mostly on editing and direction of publications and advertisements. Prominent works include YELLOW MAGAZINE with Gen Hoshino, jozo2050 by Hakuhodo "WHERE ART and SCIENCE FALL IN LOVE," GO Journal, a para-sports graphic magazine supervised by Mika Ninagawa, and culture magazine STUDIO VOICE (INFAS Publications), etc.

Marvin Conanan is a passionate advocate of the Philippines and its creative culture. He firmly believes that the talent and creativity in the Philippines is worth celebrating and cultivating. Before founding PURVEYR in 2012, Marvin worked for various companies in addition to a few small businesses of his own. However, in 2015 he focused all his energy to PURVEYR as his fulltime project. In six years, the project has grown to become a multi-dimensional brand producing digital content and an annual print magazine, running two retail stores, and hosting several events each year. All of these are done for PURVEYR to be an all-encompassing media/social brand that engages the creative community in different levels and in various aspects of their lives.

FNMNL (pronounced as "phenomenal") is a news website that began in 2016. The people involved range from those who have experience directing a music website, to photographers that work domestically and internationally, and they bring together their expertise to introduce the latest trends in music, fashion, and art. Using their networks with local artists, the aim is to create the next culture scene together with the next generation of creators who are quick to catch information via internet. In 2018 they began co-organizing projects with VISLA Magazine in Korea.

Independent web magazine that began in Seoul, Korea in 2013. Not only features fashion, art, and music from Korea, but also introduces the culture scenes from Japan, the U.S., and Europe. Since 2012, VISLA has been updating its online website with online contents. Since 2017, Free offline magazine VISLA Paper has been publishing 4 times per year. Working closely with the street culture scene in Seoul, they plan events, create products, and engage with their audience in ways that go beyond the bounds of conventional media. VISLA is a brand that represents subculture scene in Korea.

Born in 1971, Kei Wakabayashi spent his childhood in London and New York. After majoring in French Literature at Waseda University, he started his publishing career at Heibonsha and was in charge of 'Taiyo', the legendary Japanese cultural magazine. In 2000, he became a freelance editor and produced numerous publications from magazines, books, to exhibition catalogues in a broad range of fields. He was appointed Editor-in-Chief of Wired Japan in 2012, and left the publication in 2017. He is also a music journalist and is Founder of the publishing company, blkswn publishers.