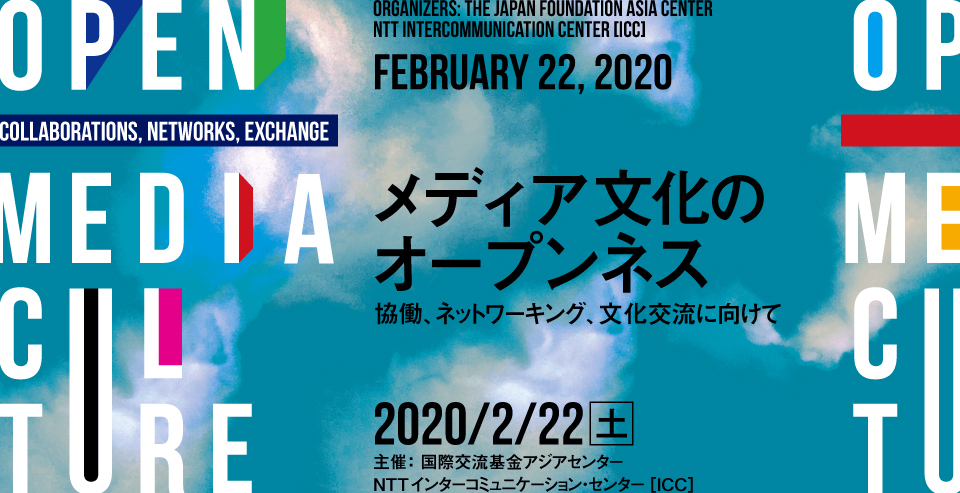 Due to the spread of novel coronavirus (COVID-19) in Japan, and out of consideration for the health of attendees and participants, the Japan Foundation Asia Center and NTT InterCommunication Center [ICC] have made the decision to change the way the symposium is held.

The symposium will now only be streamed live on the ICC YouTube channel. Members of the public will not be admitted to the symposium venue. The symposium date and times remain unchanged.

We apologize for the inconvenience and disappointment this may cause to those who had hoped to attend the symposium in person and had already pre-registered. We thank you for your understanding and cooperation.

Possibilities for culture opened up by intersections of art and technology

The Japan Foundation Asia Center and NTT InterCommunication Center [ICC] will organize the 4th International Symposium for Media Art in conjunction with the exhibition "Open Possibilities: There is not only one neat way to imagine our futures", which is running at ICC from January 2020.

Since 2016, the Asia Center has organized a series of international symposia with the aim of providing a forum for creating, disseminating, and networking art and culture in such fields as new media art and digital creativity.

Among art and technology trends in Asia, two tendencies have emerged: one that responds to technological and artistic demands globally through forms of expression that integrate the latest technologies; another that incorporates technology into historical and cultural contexts in each country to usher in new creative practices. While a prevalence exists across the region for "spectacle" that meets the desire for commercial or festive content, alternative scenes and new platforms that do not depend on existing art systems are also emerging.

Through the latest examples of artistic practices utilizing technology as well as transnational collaborative and collective projects, this symposium will reconsider the nature of art and culture in our globalized and networked society, the challenges faced today, and the possibilities for the future.

*Panelist and program contents may be subject to change.

Based in Bandung, Indonesia, Bob Edrian’s writing and curatorial research mainly focus on the development of sound in the arts and media art. He has curated over 30 exhibitions in Indonesia including Intomedia (Galeri Soemardja, 2017) and International Media Art Festival Instrumenta (National Gallery of Indonesia, 2018–9). He is a cofounder of Salon, a platform for sound and music performance and discussion, and a director of Audial Plane, the Orange Cliff Records division for sound art and experimental music. He currently teaches and tutors at Telkom University and the School of Business and Management at Institut Teknologi Bandung.

Fujiwara Chikara is based in Yokohama and active in Japan and overseas as a critic, artist, curator, mentor, and dramaturge. With the aim of connecting a world divided by what he calls "invisible walls", he has produced the flaneur-style touring project ENGEKI QUEST in Yokohama, Kinosaki, Manila, Düsseldorf, Ansan, Hong Kong, Tokyo, and Bangkok. Inspired by his interest in human mobility, he created the performances Woman in A Port (2017) and HONEYMOON (2018), and launched the IsLand Bar project with transnational artists at ADAM 2017 in Taipei and at the Taipei Arts Festival 2018. In 2017, he was a Senior Fellow at The Saison Foundation and an East Asian Cultural Exchange Envoy for the Agency for Cultural Affairs. In April 2019, he founded the art collective orangcosong with SUMIYOSHIYAMA Minori.
https://orangcosong.com

After completing graduate studies at the Institute of Advanced Media Arts and Sciences [IAMAS], Hirota Fumi worked as a researcher for the Cultural Media Center at IAMAS. She joined the Yamaguchi Center for Arts and Media [YCAM] in 2008, where she was involved with production and planning for new media art and other projects. From 2012, she was a researcher in the Arts and Culture Division of the Cultural Affairs Department at the Agency for Cultural Affairs. She worked on initiatives promoting media arts, including efforts to expand the reach of the Japan Media Arts Festival overseas and in regional Japan. During this period, she also launched a project related to restoring and archiving media art. She left the Agency for Cultural Affairs in 2015 and is currently involved at the Japan Foundation Asia Center with media art projects as part of cultural exchange initiatives between Japan and Southeast Asia. She is also a part-time lecturer in the Urban Culture Design Department at Nishogakusha University.

May Adadol Ingawanij is a writer, curator, and teacher. Her research explores genealogies of cinematic and media apparatus, potentialities of contemporary artistic and curatorial practices, and the aesthetics and circulation of artists' moving images, art, and independent films in, around, and beyond Southeast Asia. She co-directs the Centre for Research and Education in Arts and Media. She is the recipient of the British Academy's Mid-Career Fellowship (2018–19) for her curatorial and publication project Animistic Apparatus (2018–). Her recent English-language publications include "Comedy of Entanglement: The Karrabing Film Collective" (Afterall: A Journal of Art, Context and Enquiry, 2019) and "Making Line and Medium" (Southeast of Now: Directions in Contemporary and Modern Art in Asia, Vol. 3, 2019).
http://mayadadol.info

Iwabuchi Koichi's research interests are trans-Asian cultural flows, connections, and dialogue as well as diversity, multicultural questions, and cultural citizenship. He has been leading collaborative projects that aim to transnationally enhance cultural diversity through artistic practices, such as "migrant diplomacy" project co-working with the Immigration Museum in Melbourne and the trans-East-Asia Multiculturalism (TEAM) project. His recent English publications include Resilient Borders and Cultural Diversity: Internationalism, Brand Nationalism, and Multiculturalism in Japan (Lexington Books, 2015), "Migrancy and Diplomacy: Fostering Cross-Border Dialogue and Collaboration in the Age of Hyper-Mobility" (The Brown Journal of World Affairs, 2018), and "Trans-Asia as Method: A Collaborative and Dialogic Project in a Globalised World" (Trans-Asia as Method: Theory and Practices, Rowman & Littlefield International, 2019). From April 2020, he will take up a position as professor in the School of Sociology at Kwansei Gakuin University.
https://research.monash.edu/en/persons/koichi-iwabuchi

Kim Seong-Hee is an independent performing arts curator based in South Korea. She is currently the Project Director of Performing Arts at the National Museum of Modern and Contemporary Art, Korea. From 2013 to 2016, Kim served as the inaugural artistic director of Asian Arts Theatre at Asian Culture Center. Kim was also the founder and artistic director of Festival Bo:m (2007–2013), an international interdisciplinary arts festival, the artistic director of Station 2 at Nam June Paik Art Center's Inaugural Festival (2008), and the organizer and director of International Modern Dance Festival (MODAFE) (Seoul, 2001–2005).

Since 2002, Umeda Hiroaki's choreographed works have been staged at more than 150 cities in 40 countries, including at the Théâtre National de Chaillot in Paris. In addition to the choreography and dance in his performances, he also creates the sound, video, and lighting design, the results of which have been presented as technology art and music. In recent years, he has made installations with a special focus on physical sensations as well as standalone video works for such exhibitions as AUDIO ARCHITECTURE (21_21 DESIGN SIGHT, Tokyo, 2018) or video works based on his dance pieces and shown as dome projections at festivals around the world.
http://hiroakiumeda.com/