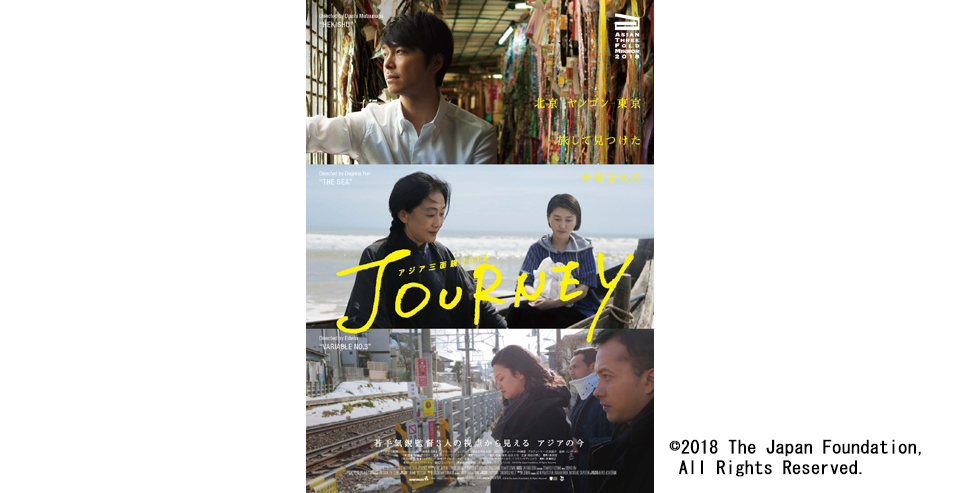 The world premiere of Asian Three-Fold Mirror 2018: Journey, the second installment of the Asian omnibus series co-produced by the Japan Foundation Asia Center and Tokyo International Film Festival (TIFF) will be held at the 31st TIFF. Q&A session will be scheduled with the directors and casts. Along with the screening, three directors who co-created the omnibus film will hold a symposium to talk about the making of the film.

* There will be no film screening at the symposium.

Born in Inner Mongolia, Degena Yun graduated from the University of London and earned an MA in Film Directing from Beijing Film Academy. She made her feature debut with Latitude 52 (2012), which was in competition at the Montreal World Film Festival. Her second feature, A Simple Goodbye (2015), won the Spirit of Asia Award from the Japan Foundation Asia Center at the 28th TIFF as well as screening Torino, Xining and Minneapolis.

Born in Tokyo, Daishi Matsunaga started his career as an actor and then directed music videos and commercials, as well as a TV series, Rescue Fire. His widely acclaimed documentary, Pyuupir (2011), was featured in numerous international film festivals including Rotterdam, Jeonju and Paris Cinema. His first narrative film, Pieta in the Toilet (2015), was a smash hit. Vibration: THE YELLOW MONKEY, a documentary about legendary Japanese rock band The Yellow Monkey, was released in November 2017 and screened at the 22nd Busan International Film Festival and the 30th TIFF. His latest film, Hanalei Bay, is based on a Haruki Murakami short story, and will be released in Japan in October 2018.

Born in Surabaya, Indonesia, Edwin obtained a diploma in Graphic Design from Petra University and studied film at the Jakarta Institute of Arts, where he liberated his passion for filmmaking, utilizing spontaneous, flexible and fun approaches. His first feature, Blind Pig Who Wants to Fly (2008) received the FIPRESCI Prize at the International Film Festival Rotterdam 2009; and his short film Kara, The Daughter of A Tree (2005), was the first Indonesian film to be shown at the Director's Fortnight in Cannes 2005. Postcards From The Zoo (2012) was nominated for a Golden Bear at the 2012 Berlinale. His latest film, Posesif (2017), was a smash hit in Indonesia and won the Best Director Award at the Indonesian Film Festival 2017 (Indonesia's equivalent of the Academy Awards).