Yogyakarta-based filmmaker Eddie Cahyono's encounter with Akira Kurosawa films diverted his love for Hollywood and Hong Kong action films to a love for filmmaking. The filmmaker's second feature film, SITI, was well-received in Indonesia, breaking records for an independent film, and, since its international premiere in Singapore, has also gained worldwide recognition at film festivals such as those in Rotterdam, Shanghai, and Udine.
In screening the film for Colorful Indonesia 2 at the Athénée Français Cultural Center on January 26, 2017, we spoke to the director about his filmmaking, the sense of responsibility of filmmaking for future generations in film, and finally his third feature film, Wasted Land which he is currently working on with fellow filmmaker Ifa Isfansyah and producer Isabelle Glachant. 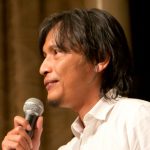 Born in Yogyakarta, Indonesia. Film Director Eddie Cahyono was one of the founding members of Fourcolours Films. His short film Di Antara Masa Lalu dan Masa Sekarang [Between Past and Present] (2001) won various awards. His debut feature film is Let's Dance! (2010) and his second feature film, SITI (2014), was screened at international film festivals in Singapore, Shanghai, Rotterdam, Udine, and other countries.

From Kurosawa, to the World of Film

The Japan Foundation Asia Center (hereinafter JFAC): I'd like to ask you several questions about your filmmaking. My first question is how did you first enter the film industry? How did you start making films?

Eddie Cahyono (hereinafter Cahyono): Actually, it was because I really liked films. At first, I used to watch mostly Hollywood and Hong Kong cinema. So I grew up with those kinds of films and it was when I graduated from high school that I saw Akira Kurosawa films for the first time in Jogja (Yogyakarta). One of the film screenings I went to, I think, was called "Tribute to Akira Kurosawa." There were a lot of Akira Kurosawa films. I watched Shichinin no samurai [Seven Samurai], Ikiru [To Live], Hakuchi [The Idiot], and Maadadayo. Akira Kurosawa's films seemed to be portraying life to me so it was very inspiring. It was very different from Hollywood or Hong Kong cinema and it was motivating to learn about films and filmmaking on my own.
At the time, it was difficult to find good films in my community so I thought about attending a film school, but I didn't, in the end, because it was too expensive. I ended up attending the Institut Seni Indoneisa Yogyakarta (ISI) or the Indonesian Institute of Arts in Yogyakarta in 1999 with Ifa Isfansyah,*1 who's my producer as well as my friend.

*1 Born in Yogayakarta, Indonesia, in 1979. Ifa Isfansyah's first feature film Garuda Di Dadaku [Gardua in My Heart] (2009) was an instance box office hit. He won Best Director at the 2011 Indonesian Film Festival with The Dancer which also won Best Picture.

Cahyono: I met Ifa at ISI and we tried to build a film community, and then we made our first film which was a short film called Di Antara Masa Lalu dan Masa Sekarang [Between the Past and the Present] (2001). It was my first ever film as the director. When it won a national award, it really stimulated us to work on our next film. That's how Ifa and I started Fourcolours Films in 2001. Until now, we've produced many short films; there must be about thirteen or maybe fifteen. We try to direct our energy towards raising money and making films independently. So this film, SITI is the first production by our company; from a community we have grown into a company.

JFAC: How many people belong to Fourcolours Films? It's not only you and Ifa, is it?

Cahyono: Basically, it is Ifa, myself, Narina Saraswati, and Sylvia, but there are always other people in Fourcolours, like Adi Marsono. He is my assistant director and we suggested to him, "Why don't you direct this time?" So he made a short film called Semalam, Anak Kita Pulang [Last Night Our Daughter Came Back Home], and it won a lot of national awards in Indonesia and was also screened at the 2015 Singapore International Film Festival (SGIFF). So we try to make films with other directors too; it's not just us four.
We also produced another film with a different director whose name is Wicaksono Wisnu Legowo. He directed Turah (2016) and Ifa produced it. The film won the Special Mention for the Asian Feature Film Category at the 27th SGIFF in 2016.

SITI: A Portrayal of Woman based on a True Story

JFAC: How did you come to choose the topic for SITI?

Cahyono: We had never produced a feature film on our own, so Ifa and I directed our energy towards creating this film based on our ideals and convictions. We actually only had 10,000 dollars to start with.
I had heard that there was a karaoke bar that had been closed down by the police in my hometown, and also that there were women who died from alcohol poisoning. I decided to write the script based on these true events. In Javanese culture, there are so many problems of equality; women basically aren't treated equal to men, and this bias exists even among husbands and wives. So I wanted to portray or deal with the message of freedom. That was how I came up with the character, Siti.
Siti is a young woman who lives with her husband who suffers from hemiplegia—paralysis of half of the body—, her son, and mother-in-law. During the day, Siti sells snacks on the beach, but since that is not enough to pay off the debt her husband owes, she resorts to working as a hostess at a karaoke bar during the night. Obviously, her husband doesn't like that she works at a karaoke bar, but, for Siti, she doesn't have a choice. So it's a dilemma for her. Furthermore, I placed Siti in even more of a predicament by having a police officer fall in love with her.

JFAC: How were you able to make the film with such a low budget?

Cahyono: I shot the film in about a week; six and a half days to be precise. We had a small crew so that's why the film is in black-and-white. We didn't have enough funding to rent lighting, but the black-and-white isn't just because of that. I chose to have the film in black-and-white because I wanted to emphasize how Siti's life is colorless. Not everything is black and white; there are different tones of gray even in Siti's character too. But I thought black and white will go well with Siti. For the frame size, too, I chose the standard four-to-three ratio not to make the screen too wide; to show how narrow-minded Siti's perspective on life is.

JFAC: I see, I was wondering about the choice of black-and-white. It makes very good sense.

Cahyono: When I first wrote the script of SITI, the tentative title was Dewi. Dewi means "goddess" in Bahasa, but Ifa didn't agree with it because he thought it was too lofty. So he suggested the name Siti, and I immediately fell in love with it because it means "land" or "mother earth." For me, it matched her character because she takes care of everything.
Siti is also the name of Ifa's mother; it's a popular, common name in Indonesia and many women are called Siti. I thought it was perfect.

Next Page
Film Education in Yogyakarta