How Music is Born

―How is tradition connected to your own practices and composing?

Tran: As I said, I studied traditional music through practicing it, but I had to allow it time to sink in: to not understand it with my head but to feel the essence of the aesthetics and philosophies of traditional music with my instincts. That is how I am able to play the instruments and also sing.
I cannot quite explain how what I have learnt from traditional music and Western classical music connect when I compose. I leave it to nature for all of what I have acquired from music to light a fire in me. Then, I externalize it as a music piece.
Composing is an entirely internal process for me: it is something personal, that is and becomes a part of myself, and something that I deeply think about. It is something that I cannot decipher but, at the same time, something that still manages to drive me.
There is no fixed form for composition; the concept of each piece determines each of their forms. You first encounter a strong desire to make a piece, but you then have to explore what exactly that desire is. It is always elusive and ambiguous, but trying to learn about and understanding it is the most important part of composing. Once I decipher that, I work on the elements to articulate it.
It is difficult to explain how I compose; I am the intuitive type. I can analytically talk about the elements that form my pieces in detail now, but during the process of composing, I suspend and bracket all of the analyses and training I acquired. I observe how the compositional elements quickly start to fall into place in relation to one another and generate a form. I lend myself to that whole process, which I find extremely pleasurable. 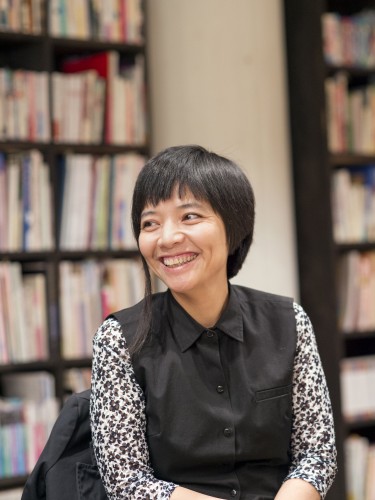 ―I listened to some of your pieces on the website. The music itself seemed to embody a certain sense of tension and constriction, but it still seemed to permeate into my body so naturally. It was a wonderfully strange yet comfortable sensation. I was thinking of asking you how you created these pieces, but you have already answered it somewhat earlier.
What I also found impressive was that while my ears were attentive to the music, I was strongly made aware of its spatial nature and the individual sounds each instrument made while playing in ensemble. Comparing your piece with European orchestral pieces, where, in the latter, each and every instruments play within the ensemble toward a culmination in a linear temporality, I felt there was a different kind of temporality from your pieces.

Tran: Yes, Asian traditional music sounds differently from the tradition of Western classical music. Moving back and forth between these two worlds is as difficult as living in this globalized society.

―Could you elaborate on that?

Tran: Although (or because) it was before Doi Moi, in a sense, I think I had a relatively simple and easy childhood. For children who aren't aware of the social system or politics of the country, it was a comfortable world to grow up. Now, however, with a higher level of freedom, it is more difficult to navigate the superfluous amount of information that is occasionally contradictory and thus confusing for us; for my daughter, for example. Exposed to many kinds of cultures and different values, we are constantly in a conflict of making our own choices.
On the other hand, however, this situation is also a great opportunity for us. It is not easy, but it still provides us with the chance to construct our own sense of "self" which cannot be done in a closed society or a culturally homogenous environment. We are placed on the edge now and are made to make a choice. As much as it is intimidating, it is also motivating at the same time.

The Educational Programs of DomDom

―The Educational Programs of DomDom consist of three categories: Improvisation, Ensemble, and Electronic music. Why these three?

Tran: About five years ago, I was driven by the urge to change the current educational system. Before opening DomDom, I researched into the situation for about two years, interviewing musicians and experts who were affiliated with music institutions in Vietnam. I wanted to know what the people inside the system really thought. In addition, I also looked into what the current society needs, to see the conditions of the music community from a larger perspective. I began to understand clearly the problems of and what lacked from the existing educational curricula.
More on the practical side, however, the budget we had in the beginning for DomDom was only for two years. To be honest, I wanted to have a composition class as part of the educational program, but I had to think of an effective program that could produce the best outcome in two years. Otherwise, I wouldn't be able to sustain DomDom. 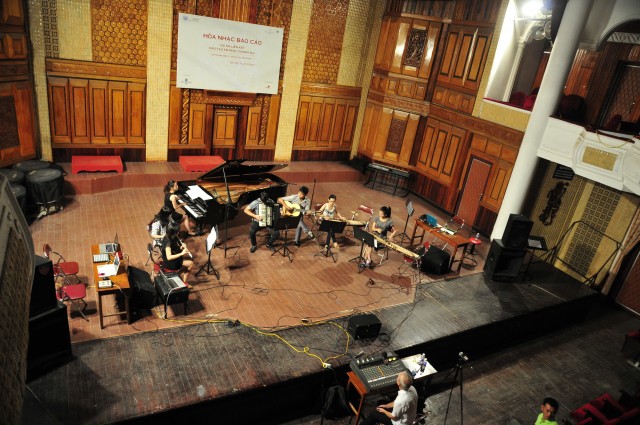 Tran: You really have to study many things to become a composer, which is virtually impossible to do in just two years. A single composition class would not suffice, and you need other lasses to learn many other theories of music. With that said, I focused on improvisation because I think it is a good approach to the ideas and philosophies of contemporary music. To understand twentieth century music, studying improvisation might be more effective than studying the theories of composition. As such, it is difficult to teach contemporary theories of composition to young musicians who have never played contemporary music. Bracketing theories and learning improvisation allows them to be "in touch" with the philosophy of contemporary music in an immediate, intuitive and practial way; it is an experience that is entirely different from what the students of classical music have studied.
It is the same for ensemble classes. In ensemble classes for experimental music, the students are first made to read scores of contemporary music, which, for most, will be their first time. In addition to this, they study the various new techniques of playing instruments which experimental music has developed over the years. These provide students with the opportunity to learn, firsthand, not only techniques but also the music of the twentieth century itself.
One of the issues of music education system in Vietnam is that the focus is not on coaching artists or creators, but on training "artisans." Improvisation is an effective methodology to break through this tendency. Students who have been trained in the technical education system will be lost if you suddenly tell them, "from now, be creative, drop all the training, and pursue what you want." You need, first, to open the door to their creative processes. If you continue to follow the instruction of others, you will not be criticized, and, thus, you wouldn't have to think for yourself, resulting in you not having to create anything new. In the current Vietnamese classical music education, that is the cycle students fall into; they are provided with scores which they are expected to replicate exactly to the tip, are kept within a safe and comfortable environment, resulting in their passive attitude.
The method we choose is to provide students with very simple rules and guide them to improvise using only those rules. They will be exposed to the pressures of constantly creating something, to being on their feet and working off other improvisations. Every moment they improvise, they become composers. Even though there are rules, they are still responsible for creating music from within themselves. 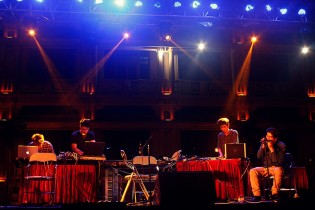 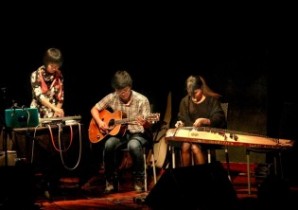 ―I think improvisation involves various aspects, some of which are pro-creative and others that are non-creative. What kind of improvisation do you instruct at DomDom?

Tran: At DomDom, we teach improvisation in experimental music that is based on the aesthetics of twentieth century music such as Stockhausen or John Cage. However, some of our students have had no formal music education, or have only been playing electronic and digital music as DJs in the underground scenes. For those students, we first have to help their listening abilities with regards to contemporary music. In our improvisation class, emphasis is placed not only on the playing but also on the listening of contemporary music. After the practicing portion of the class, we have an exercise, or brainstorming session, to explore new ideas from what was played immediately before. The core element of the class is, in fact, the discussion rather than the playing. After every performance, I share with the students my thoughts and analyses about it, to which they reciprocate and share their thoughts, and we end up discussing the performance to reflect on experimental music. Playing is simply one of the means to encourage the discussion.
With that said, however, we don't intend to just import the aesthetics and values of Western experimental music; we don't want our students to copy Stockhausen or other famous composers. What I recognize in and admire about Western contemporary music is that the pieces are creations of truly independent individuals. That, I am very much convinced of. What I want to develop in Vietnam are those kinds of musicians.
The philosophies and aesthetics of experimental music can be a very effective tool to nurture the sense of individuality or autonomy for musical expression. They may not enjoy it at first, but, through improvising, I want them to find and raise their own voices and eventually start walking on their own two feet. Although experimental music is just one of many genres, I truly think it is one of the most effective methods for constructing an individual's autonomy.

―You said there are self-taught students in DomDom. What about the other students?

Tran: Most of them are students or alumni of the Vietnam National Academy of Music who are mostly musicians, but some of them have started to study composition. I'd like to think that DomDom somehow stimulated them toward that direction. Also, there are some students and musicians of traditional music who join us. 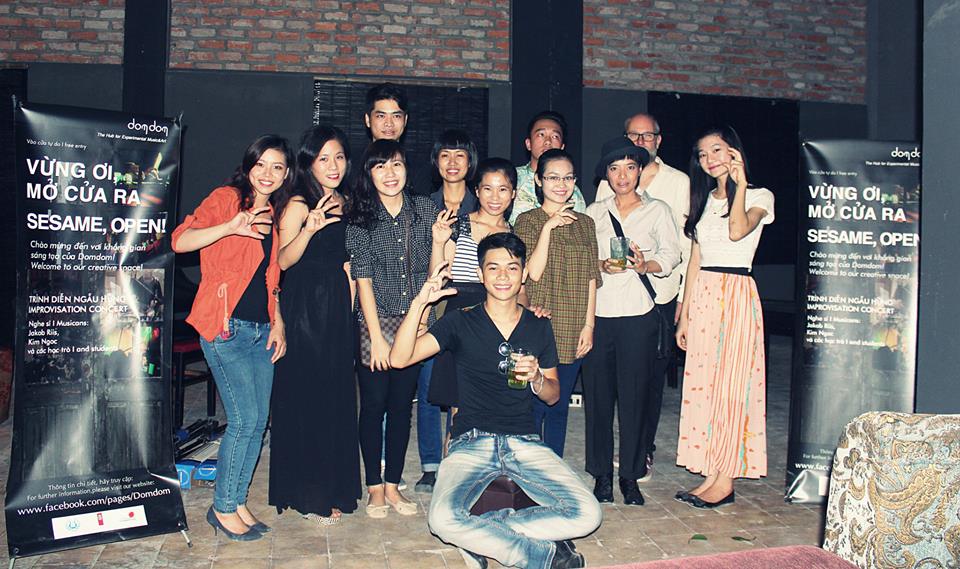 Tran Kim Ngọc and her students of DomDom

Next Page
The Audience in Hanoi—Where Have the Intellectuals Gone?