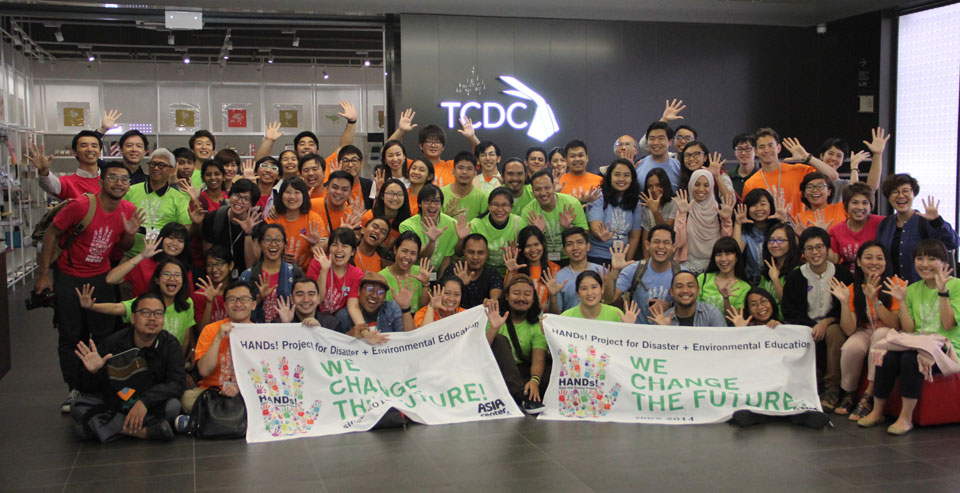 Approximately one third of the world’s natural disasters occur in Asia due to its climatic and topographical characteristics. 1350 disasters, such as earthquakes, typhoons and volcanic eruptions, have occurred in the past ten years in Asia, affecting a total of 1,624.49 million people including those who were injured and killed in the disasters. There are, however, no evacuation drills in some areas, and many people do not know how to confront disasters. In order to respond to this challenge of natural disasters, we must not only deal with individual countries and regions, but Asia as a whole, sharing knowledge and communicating in an engaging manner. In 2014, the Japan Foundation Asia Center launched the HANDs! Project to form a next–generation disaster–prevention network. From 2014 to 2017, we conducted exchange programs for Asian youths to learn about creative disaster education, and trained 100 fellows from nine countries. From 2018 to 2019, we supported 5 projects collaborated by the HANDs! Fellows.

Carried out a contest in which HANDs! Fellows made presentations on their CAC projects.
August 27 to 28, 2018
Thailand: Bangkok

Exhibition "EARTH MANUAL PROJECT – This Could Save Your Life"

September 27 to December 12, 2018 United States: New York
Exhibition "EARTH MANUAL PROJECT – This Could Save Your Life"

HANDs! –Hope and Dreams– for Miyako!

May 2 to 26, 2019
Indonesia: Jakarta
https://asiawa.jpf.go.jp/culture/events/e–asia2019–earth–manual–project/ (Japanese text only)

Exhibition and workshop featuring creative Asian endeavors on the themes of disaster and environmental issues
July 2 to 15, 2019
Japan: Ikebukuro
https://asiawa.jpf.go.jp/en/culture/events/e-asia2019-disaster-and-design/(Japanese text only)

We would like to thank all HANDs! Fellows and Advisors for their support, the people who warmly welcomed us at the places we have visited so far, and all the other people who have so willingly cooperated with. A sincere thank you to you all.