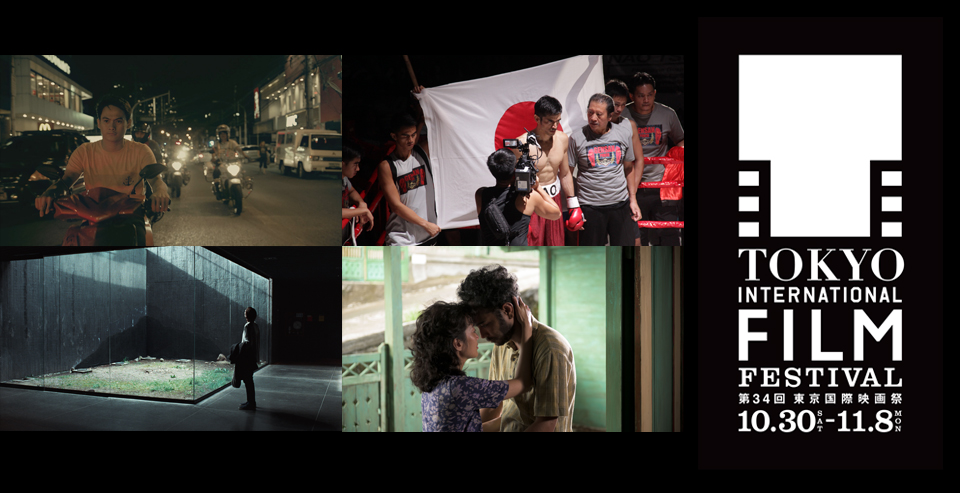 The Japan Foundation Asia Center is co-organizing a packed lineup of Asian cinema at the 34th Tokyo International Film Festival (TIFF), which takes place from Saturday, October 30 to Monday, November 8, 2021. In addition to co-presenting the "Asian Future" section with TIFF, the Japan Foundation Asia Center introduces the rich variety of Asian cinema at the festival through screenings of ten remarkable films in the Competition, Gala Selection, World Focus, and other sections.

The Gala Selection section has screenings of the Japanese-Filipino co-production GENSAN PUNCH (2021), also directed by Brillante Ma Mendoza, and Apichatpong Weerasethakul's Memoria (2021), which won the Jury Prize at the 74th Cannes Film Festival.

The World Focus section includes Vengeance Is Mine, All Others Pay Cash, which won the Golden Leopard at the Locarno International Film Festival this year and is the latest from Indonesian director Edwin, who previously made one of the films in Asian Three-Fold Mirror 2018: Journey, the omnibus film co-produced by the Japan Foundation Asia Center and TIFF.

The Conversation Series at Asia Lounge is also held during TIFF and features talks with Brillante Ma Mendoza, Apichatpong Weerasethakul, as well as Bahman Ghobadi, whose film The Four Walls is in the Competition section. Streamed live online, these talks superbly complement the screenings at the festival.

Don't miss this opportunity to experience the incredible cinema of Asia!

Films co-presented by the Japan Foundation Asia Center and TIFF

A witness under police escort is attacked. A policewoman, the only one who survives, is sheltered by indigenous people, but assailants hunt her down... An action thriller set in Bataan.

1929. Pablo Neruda arrives in British Ceylon as Chilean consul. He lives quietly by the sea, healing emotions damaged in his previous post. An ambitious film set in colonial-era Sri Lanka.

Chased by police, bike thief Isaac asks his boss for help but gets the cold shoulder. He then plans vengeance against the boss... Payback depicts a man caught in a slum's crime ring.

During the SARS outbreak of 2003, 13-year-old Fen returns to Taiwan. Depicts the director's experiences: her mother's illness, a feud with classmates. Karena Lam plays Fen's mother.

In the ancient city of Varanasi, which embraces an intricate history of Hinduism and Islam, a sari weaver and an orchestral dancer live their respective lives, until an incident occurs...

Real estate agent Mike clashes with local residents over land development. This tense and topical drama is the second film by the up-and-coming director of Underground (TIFF2017).

An old coffin painter, whose son was murdered, waits for the killer to leave prison. A mother and her daughter move to his neighborhood, which changes him. Will he still want vengeance?

A nomad family migrates with their camels and goats when summer and winter turn. Balanced between traditional and modern lifestyles, migration season comes. What do they see ahead?

In wartime, a boy, his family's breadwinner, meets an Australian journalist, and hopes to make his dream to be an actor come true... Iranian director portrays children in Afghanistan.

14-year-old Ahmad is the breadwinner for his fatherless family. At his mother's request, they rent a farm, but human bones are found, disturbing their plan. A challenging debut feature.

The latest film by the director of Jallikattu. Two cops undercover trailing a fugitive find themselves trapped in a perpetual labyrinth of a mountain village called Churuli.

From award-winning director, GENSAN PUNCH is inspired by a true story of TSUCHIYAMA Nao, a disabled athlete who refuses to let his articifical leg hinder his dream to become a professional boxer.

Apichatpong's latest film shot entirely in Colombia. Tilda Swinton plays a woman who travels from Bogotá to a small town in the mountains after being disturbed by a loud 'bang' during sleep.

When tragedy happens, no one is outsider. A public slashing incident connects a group of young lost souls in Taipei city.

Ajo Kawir is a fighter who fears nothing, not even death. His raging urge to fight is driven by a secret―his impotence. Tokyo Gap-Financing Market 2020 Selected Project.

A troubled mother brings her son on an excursion to the beach after their family tragically unravels. At the edge of the sea, a horrifying truth awaits.

Matsuda Seiko's directorial debut. A tale of a schoolgirl who meets the man of her dreams―her idol. But something seems amiss and her fairy tale is destined for a hellish end.

Fragrance of the First Flower reveals the love and lust between two women, the conflicts between gay family and tradiditional stereotypes. It finds back the forgotten love with a romantic touch.